Genetics behind Gotra System – Not Really!

zebra16 said:
Another thread which caused disharmony rather than enlightenment !!

So my curiosity is why we make such specific topic search and help publicize sub-standard stuff.
Click to expand...

This is not the first and it will not be the last.

A benign explanation for this is that some are unable to tell what is substance and what is fluff in the cyber space.

This trait in conjunction with an agenda and unholy alliance blinds good judgment and prevents healthy debates.

You have written well and it was a pleasure to read your post. My up vote
Z

a-TB said:
This is not the first and it will not be the last.

A benign explanation for this is that some are unable to tell what is substance and what is fluff in the cyber space.

This trait in conjunction with an agenda and unholy alliance blinds good judgment and prevents healthy debates.

You have written well and it was a pleasure to read your post. My up vote
Click to expand...

On a tangential note, you may like this video which shows how willing is some sections of the media to play hand-maiden to a certain set agenda and fairly robust response I would say provided by the guest, Sri Devadutt Pattanaik:

zebra16 said:
Another thread which caused disharmony rather than enlightenment !!

Post # 1 is an extract of a blog post. Now for most part, blog posts are mostly stuffs that do not get published in reputed journals or peer reviewed magazines or in newspapers because they lack the vigour and rigor of scientific analysis. No matter what the educational qualifications of the blogger is, the articles lacks in-depth analysis. Mostly these blog posts cater to the appetite of people driving that particular agenda .

We have one of our members who gives fanciful explanation of modern scientific inventions and discoveries of boson particle, quasars etc through the prism of vedas and puranas. I have not come across many in our TB forum agreeing with his flights of fantasy and he too has his blogpost. Doubt if many visit his blogpost for periodical updation.

It is common for the blog posters to dazzle their visitors by making mention of their education and achievement in other fields, as if merit and achievement in one field ipso facto tantamount to expertise in all the fields. Thus we have vedas dissected by Theoretical Physicists and human genome bared open by vedics who boast of having mastered the knowledge from Charaka and Sushruta.

For my immediate query in medical field in the absence of knowledge to whom approach, I will seek the opinion of our own resident Medical expert, Dr. Renuka, for I am sure she will guide me to how to approach and wont fib and give a wishy-washy answer rather than seeking knowledge from dubious net resources.

I do not know exactly how much of DNA and Y-chromosomes is learnt while studying molecular biology and biochemistry. My estimate would be not much. Even if the author of the blog post is passionate about the subject and has done a lot of work in that area, for us to know we have to read at least one of the three reference books she has cited in the article which Sri a-TB has given link in post #3.

The references cited by the poster are to page 813-16 of one book, 494-499 of the second and 488-493 of the third. My layman intuition is that the poster has used selective reading to further the cause of the agenda they want to promote. I seriously doubt anyone has cared even to look a single reference, so why we are arguing ourselves out?

The link where the original post is available is given in post #3. Apart from giving rubbish meaning of Sanskrit words, like trAhi = shed, it gives sanctimonious advice to politicians like “I hope they focus on governance and follow(ing) the Constitution of India. Have you seen a serious science oriented person make such a tom-foolery of politics in his research papers?

Irony died a thousand deaths when the new genome acharya after trashing the gotra system, wants us to subscribe to her genome-patri, (quite rhyming with janma-patri) as the new maestro of gotra syndicate and relishes the title of AchArya !!!!

Generally such blog posts do not present themselves in google search in matters of general interest. So my curiosity is why we make such specific topic search and help publicize sub-standard stuff.
Click to expand...

Very true. Please stand before a mirror and read it out loudly to whom you see there.
OP
OP

Vaagmi said:
Very true. Please stand before a mirror and read it out loudly to whom you see there.
Click to expand...

Was it for me or you. I never claimed to be an expert, and I am always willing to learn, one who is humble has no fear of trying and falling down, but someone who is on a pedestal better watch out, because the fall (eventually) will hurt you. LOL

prasad1 said:
Was it for me or you. I never claimed to be an expert, and I am always willing to learn, one who is humble has no fear of trying and falling down, but someone who is on a pedestal better watch out, because the fall (eventually) will hurt you. LOL
Click to expand...

Gold Member
One who is smart would have understood. The one who did not is a ......
But even you can understand this song or maybe not (it is in Hindi).

Gold Member
At the heart of some pseudoscience (and some religion also, New Age and Old) is the idea that wishing makes it so. How satisfying it would be, as in folklore and children's stories, to fulfill our heart's desire just by wishing. How seductive this notion is, especially when compared with the hard work and good luck usually required to achieve our hopes. The enchanted fish or the genie from the lamp will grant us three wishes—anything we want except more wishes. Who has not pondered—just to be on the safe side, just in case we ever come upon and accidentally rub an old, squat brass oil lamp—what to ask for?

Pseudoscience is embraced, it might be argued, in exact proportion as real science is misunderstood—except that the language breaks down here. If you've never heard of science (to say nothing of how it works), you can hardly be aware you're embracing pseudoscience. You're simply thinking in one of the ways that humans always have. Religions are often the state-protected nurseries of pseudoscience, although there's no reason why religions have to play that role. In a way, it's an artifact from times long gone. In some countries nearly everyone believes in astrology and precognition, including government leaders. But this is not simply drummed into them by religion; it is drawn out of the enveloping culture in which everyone is comfortable with these practices, and affirming testimonials are everywhere.

Perhaps the most successful recent global pseudoscience—by many criteria, already a religion—is the Hindu doctrine of transcendental meditation (TM). The soporific homilies of its founder and spiritual leader, the Maharishi Mahesh Yogi, can be seen on television. Seated in the yogi position, his white hair here and there flecked with black, surrounded by garlands and floral offerings, he has a look. One day while channel surfing we came upon this visage. “You know who that is?” asked our four-year-old son. “God.” The worldwide TM organization has an estimated valuation of 3 billion. For a fee they promise through meditation to be able to walk you through walls, to make you invisible, to enable you to fly. By thinking in unison they have, they say, diminished the crime rate in Washington, D.C., and caused the collapse of the Soviet Union, among other secular miracles. Not one smattering of real evidence has been offered for any such claims. TM sells folk medicine, runs trading companies, medical clinics and “research” universities, and has unsuccessfully entered politics. In its oddly charismatic leader, its promise of community, and the offer of magical powers in exchange for money and fervent belief, it is typical of many pseudosciences marketed for sacerdotal export. 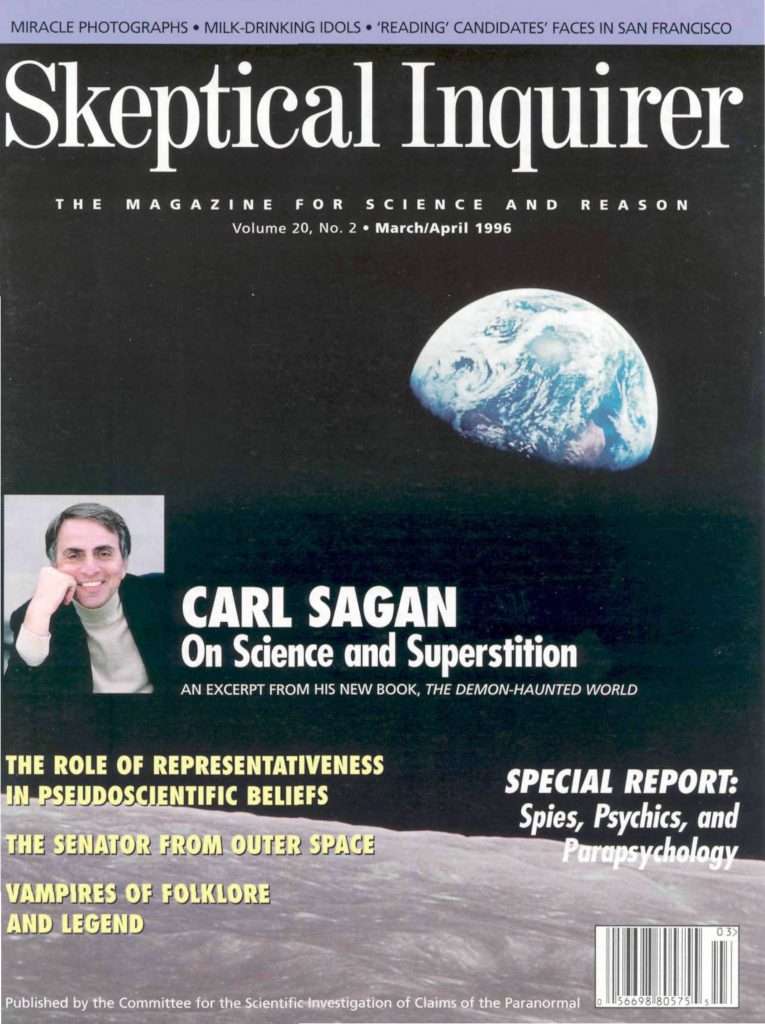 Gold Member
The government of China and the Chinese Communist Party were alarmed by certain of these developments. On December 5, 1994, they issued a joint proclamation that read in part:

So pseudoscience in America is part of a global trend. Its causes, dangers, diagnosis, and treatment are likely to be similar everywhere. Here, psychics ply their wares on extended television commercials, personally endorsed by entertainers. They have their own channel, the “Psychic Friends Network”; a million people a year sign on and use such guidance in their everyday lives. For the CEOs of major corporations, for financial analysts, for lawyers and bankers there is a species of astrologer/soothsayer/ psychic ready to advise on any matter. “If people knew how many people, especially the very rich and powerful ones, went to psychics, their jaws would drop through the floor,” says a psychic from Cleveland, Ohio. Royalty has traditionally been vulnerable to psychic frauds. In ancient China and Rome astrology was the exclusive property of the emperor; any private use of this potent art was considered a capital offense. Emerging from a particularly credulous Southern California culture, Nancy and Ronald Reagan relied on an astrologer in private and public matters—unknown to the voting public. Some portion of the decision-making that influences the future of our civilization is plainly in the hands of charlatans. If anything, the practice is comparatively muted in America; its venue is worldwide.