From today the Navaratri begins, so I thought of posting one slokam/song per day on Ma Durga for nine days, I hope you will appreciate this and expect your valuable contribution in the form of slokams or songs. Thank you, with regards.. Anandi

Mahishasura Mardini Stotram or Mahishasur Maridhini Sloka is a very popular devotional stotra of Goddess Durga written by Guru Adi Sankaracharya (Sri Sri Sri Shankara Bhagavatpadacharya). This devotional verse is addressed to Goddess Mahisasura Mardini, the Goddess who killed Demon Mahishasura. Mahisasura Mardini is the fierce form of Goddess Durga Maa (an incarnation of Goddess Parvathi), where Durga Maa is depicted with 10 arms who rides in a lion or tiger and carrying weapons and assumes symbolic hand gestures or mudras... 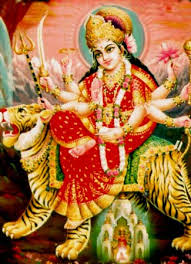 Thank u so much Ravi Bhai..I am very happy to see you contribution.. For the next 9 days, let us share and learn some good/informative/useful Devi Slokams and Devi devotional songs...Let us Celebrate this Navaratri with our forum friends in a simple yet spiritual manner.. With affection.. Anandi
OP
OP 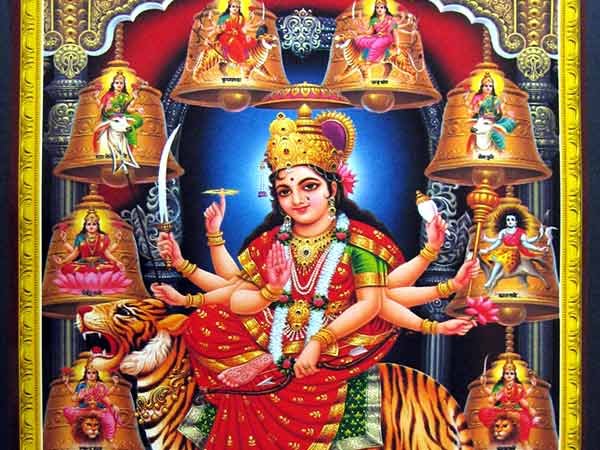 Happy Navarathri to all

Dr. Anandi.
Thanks for starting this thread.
My mother used to sing a davi song describing various forms she took to destroy 'Sumb-nishumba, 'raktbijan, and finally Mahishasuran.
I would like to find that song.
K

prasad1 said:
Dr. Anandi.
Thanks for starting this thread.
My mother used to sing a davi song describing various forms she took to destroy 'Sumb-nishumba, 'raktbijan, and finally Mahishasuran.
I would like to find that song.
Click to expand...

Dear Prasad ji
Thank you so much for your nice comment. If you want me to help you in searching the song for you, if I will come across, I will post it for you for sure.. But, if you can give the first line or about the singer of the song, then it will be useful in searching the song from my end too. There are so many songs with the above concept, as you have described, from various singers, without the first line, or name of the album or name of the singer.. it will be difficult to search.. If you can provide me some hint, definitely I will also help you from my side.thanks and regards. Anandi
OP
OP

Thank You so much dear Kunjuppu Sir, I too wish you a very happy Navaratri.. May Goddess Durga Bless Us All... Thank you and with respects.. Anandi
OP
OP

venkak said:
Happy Navarathri to all
Click to expand...

I too wish you a very Happy Navarathri.. May Goddess Durga Bless Us All.. thanks and regards.. Anandi

Dr. Anandi,
Wish I knew, I have been trying for a long time. If i knew I could have googled it.

Iam attaching here the durga sapthashati transalation which is a part of devi mahatmyam.It is very auspicious to chant sapthashati during navarathri time.....

prasad1 said:
Dr. Anandi,
Wish I knew, I have been trying for a long time. If i knew I could have googled it.
Click to expand...

Dear Prasad ji
I wish you good luck.. I also wish you get the song as early as possible... I can understand your sentiments with that song... Thanks and regards.. Anandi
N

Happy Navratri to one and all!

Thank you Renuka and a very happy Navaratri to you...
OP
OP

Happy Navaratri to you too.. Nachi Naga Sir...Thank you so much
OP
OP

One day in the sacred Rishi tradition Bhagvadpada Sri Adi Sankarachrya went to one old woman's house for alms (biksha).
She was so poor, she was not having a proper dress and anything worth the name to give as biksha. So with the entrance door of her house slightly ajar, she reached out swamiji with her hand stretched and dropped one amlaka fruit (which was the only thing available in her house) into the hands of Sri Sankaracharya.
Sri Sankaracharya was deeply touched at the plight and haplessness of the woman - So he chanted Kanakadharaa stotram and prayed Goddess Lakshmi to extend Her Grace on the woman. The giver of wealth Goddess Lakshmi showered as rain - Golden Amlaka fruits in the house of the old woman.
This Stotram has been acclaimed as Kanaka Dharaa Stavam - and it is sure to bless all devotees who extol Sri Devi with all unflinching devotion. 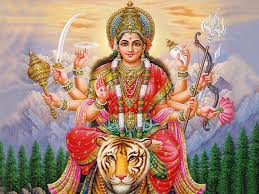 The Nind Forms of Goddess Durga...

Nava – that also means 'new' – denotes 'nine' the number to which sages attach special significance. Hence, we have Nava-ratri (9 nights), Nava-patrika (9 leaves / herbs / plants), Nava-graha (9 planets), and Nava-Durga (9 appellations). With the Blessings of Goddess Durga, I am sharing the 9 manifestations of Goddess Durga. Each goddess has a different form and a special significance. Nava Durga, if worshipped with religious fervor during Navaratri, it is believed, lift the divine spirit in us and fill us with renewed happiness.
All the nine names of goddess are narrated in ‘Devi Kavacha’ of the ‘Chandipatha’ scripture.
http://www.tamilbrahmins.com/navadurga_2.htm
1 Shailaputri

Shailaputri literally means the daughter (putri) of the mountains (shaila). Variously known as Sati Bhavani, Parvati or Hemavati, the daughter of Hemavana - the king of the Himalayas, she is the first among Navadurgas. Her worship takes place on the first day of Navaratri – the nine divine nights. The embodiment of the power of Brahma, Vishnu and Shiva, she rides a bull and carries a trident and a lotus in her two hands.
OP
OP

She is worshipped on the second day of Navaratri and is the second form of Mother Goddess. Bharmacharini means one who practices devout austerity. She enlightens us in the magnificent embodiment of Durga with great powers and divine grace. She holds a rosary in her right hand and a water utensil in her left hand. She is blissful and endows happiness, peace, prosperity and grace upon all devotees who worship her. Filled with bliss and happiness, she is the way to emancipation - Moksha.
OP
OP

The third facet of Goddess Durga is ‘Chandraghanta’, who is worshipped on the third day of Navaratri, for peace, tranquility and prosperity in life. She has a ‘chandra’ or half moon in her forehead in the shape of a ‘ghanta’ or bell. That is why she is called ‘Chandraghanta’. She is charming, has a golden bright complexion and rides a lion. She has ten hands, three eyes and holds weapons in her hands. She is the apostle of bravery and possesses great strength to fight in the battle against demons.
OP
OP

Kushmanda is the fourth form of the mother goddess and is worshipped on the fourth day of Navaratri. The meaning of the name ‘Ku-shm-anda’ is as follows: ‘Ku’ = a little; ‘ushma’ = ‘warmth’; ‘anda’ = ‘the cosmic egg’. So she is considered the creator of the universe. The universe was no more than a void full of darkness, until her light spreads in all directions like rays from the sun. Often she is depicted as having eight or ten hands. She holds weapons, glitter, rosary, etc., in her hands, and she rides a lion.
Last edited: Sep 29, 2011

Swami, now in Samadhi, , should be happy that the temple is rising.

Living in the Past? 7 Ways To Let Go And Live A Happy Life