(Tamil version of this article is also available: London swaminathan)

Deer and parrots are associated with Brahmins and seers in Ancient India. They raise parrots and deer in Ashrams (holy cottages). Manu, the Hindu law maker, says that his law is applicable only to Aryavarta where the black antelope lives. Brahmin Brahmacharis (celibates) must wear the deer skin in their sacred thread.

Deer is found in Indus seals as well. In the so called Pasupati seal, a god or an ascetic is surrounded by four animals and a deer under the dais. Buddhist sculptures have deer because of Buddha’s association with deer. 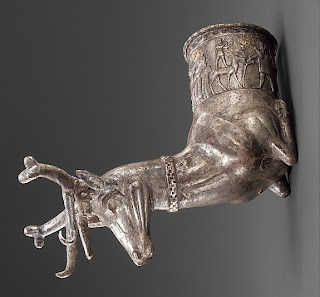 Chariots drawn by antelopes are as old as Rig Veda. We have references to Marut (Marut=Maruti=Wind God=Hanuman) whose chariot was drawn by antelopes. Marutas are storm gods. They number from 27 to 36. Various origins are assigned to them. They are sons of Rudra, sons and brothers of Indra, sons of the ocean, sons of heaven or earth. They ride golden chariots drawn by ruddy horses or reindeers. They reside in the north. They are armed with lightning and thunderbolts Ramayana gives a different story and their number increases to 49.

Nordic god Thor whose chariot is drawn by goats is compared to Maruts of Vedas. He is attributed with the same qualities. He has massive red beards (like Santa Claus).It is said that a Minoan sarcophagus dated 1400 BC also shows a chariot drawn by goats (Hagia Triada sarcophagus)

RV I-85-4 (also RV I-39; I-146)
When mighty warriors, ye who glitter with your spears, overthrowing with your strength even what is never over thrown,
When, O Ye Maruts, ye the host that send rain , had harnessed to your cars the thought fleet spotted deer
When ye have harnessed to your cars the spotted deer urging thunderbolt ,O Maruts to the fray------
(Ralph T.H. Griffith’s translation of Rig Veda, year 1889)
When Ptolemy II became the king of Egypt in 285 BC, he organised a big procession of troops and chariots. The description goes like this , “An endless array of similar wonders followed; also a vast number of palace servants displaying the golden vessels of the king; twenty-four chariots drawn by four elephants each; the royal menagerie---twelve chariots drawn by antelopes, fifteen by buffaloes, eight by pairs of ostriches, eight by zebras; also many mules, camels, etc., and twenty-four lions.” 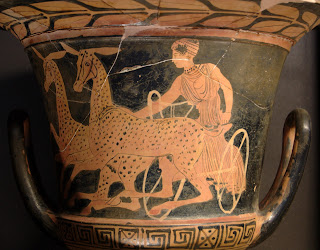 Goddess Durga has deer as her vahana. Tamil Thevara hymn (Pathikam 921) praised Durga has Kalaiyathurthi=one who rides a deer).
Metropolitam Museum of Art in New York has a cup in the shape of a deer on which a god riding a deer holding a bird in its hand is depicted. It was dated 1700 BC from Hittites in Syria/Tukey. Hittites belong to Vedic culture. It may be Vedic god Marut.
Artemis, Greek goddess of animals was worshiped from 800 BC. Though she was called Mistress of Animals, she was portrayed with deer. Her Roman counterpart Diana, Roman moon goddess was also shown riding a deer.They can be compared with Hindu goddess Durga and Aranyani and Rudrani, goddesses of Hindu Vedas. They are all connected with forest, hunting and animals.

Many of the customs followed by Christians such as Easter Egg, Christmas Tree, Santa Claus are the remnants of ancient religions. They have nothing to do with Christ or Christianity. Though they have found some modern explanations, they existed long before Christ. Santa Claus story is one of them. Encyclopaedias attribute various mythical, historical, legendary folk lore origins to Santa Claus. Modern figure of Santa with white beard and red coat was derived St Nicholas. He was a fourth century Greek saint. Neither he nor Christ has anything to do with North Pole or Reindeer chariots. Santa is always portrayed as travelling by Reindeer chariot in the icy regions of the North Pole. In short it is closer to Maruts of Vedas than to Christianity!

Vedic mantras are always associated with gifts, but gifts only for priests. We have several Dana Stutis in the Vedas giving a list of big gifts.

Parrots are associated with Brahmins and seers in Ancient India. They raise parrots Ashrams ([COLOR=#DA7911 !important]holy[/COLOR] cottages).
Click to expand...

I have a question on this practice..we read in Puranas too about Parrots being caged in house of Sages and these parrots recite even Vedas for example the parrot of Mandana Misra.

I wonder why when the dharma of a bird is to fly to the sky which is denoted by the word Khaga(Kha=Sky ga=go to) why did sages be rather inhumane and caged parrots, denying these bird of their rightful freedom??

What is the reason behind this?
OP
OP
L

This is a good question for which I have no answer. Both Sangam Tamil literature and Sanskrit literature associate Brahmins and saintly persons with parrots. Several Gods and goddesses (Meenakshi, Andal) are shown holding a parrot in their hands. My picture in the above story (Hittites,1700 BC) also shows a bird in the hand of the god. Why Parrots or any bird ?

This is only my guess:
Parrots is one of the birds with the longest life span. They live up to 80 years. Probably they wont leave you even if you let them out. Like dogs they come back to you. Caging is only for night to protect it from cats. As it is only a guess, I will try to find out answers from Dharmashastra about pets. Sangam Tamil literature describes Brahmin streets are the ones where you can not even see a hen and a dog. They kept their Agraharams so clean and pure!( Once upon a time!!!)
S

Interesting read!
although SHARABHA is not a chariot, wiki --

Hi
Sharaba is one of the mythical animals in Hindu scriptures. I have written about Ganda Beranda Pakshi, the bird that lifts two elephants in my article OUBLE HEADED EAGLE: SUMERIAN-INDIAN CONNECTION. It is similar to sharaba. Another mythical bird is HOMA which is the symbol of Iranian airlines. I have written about it in MYTHICAL VEDIC BIRD HOMA. All posts are available in tamilbrahmins and my blogs.
N

I remember the song composed by Kavi Pradeep and sung in his own voice about the caged bird .

Our puranic stories have given importance to the animals as well. Sun's chariot is drawn by horses. Devi's vahana
is either lion or tiger. Ganapathy on moonjuru. Lord Subramanya on peacock. The dancing Siva on a demon - muyalagan
and the Navagrahas have many vahanas. This reflects the philosophy of inter-relation between man and animal.

deer licks the barrel of the gun