Why drinking in India is an 'outdoor sport'


In India, drinking alcohol is primarily an outdoor sport played at night.
The dark and the bottle go together. Even some upmarket bars have the lighting turned down low and the windows shuttered.
Drinking is a secret and illicit activity, even though it's not banned in most states of the republic. For the average Indian male, drinking at home is taboo. You don't want to drink in front of your old mother (it's disrespectful) or your wife (she will beat you with a broomstick). So if you want to drink, you head for the great outdoors.
I grew up in Allahabad, a city in the northern plains, best-known for hosting the Kumbh Mela once every 12 years.
In the 1980s, Allahabad didn't have any bars. The only public transport available was the cycle-rickshaw. The simplest way to drink was to hire a cycle-rickshaw by the half hour. The rickshaw-puller would pedal around the quiet streets - laid out at right angles, Manhattan-style - of the colonial town, while you finished your beer in twilight.


[h=2]'Drink up buddy'[/h]In Dehradun, in the foothills of the Himalayas, where I now live, there are no cycle-rickshaws. Auto-rickshaw drivers are friendly and more than game for a drink.
This is how it happens: the driver will pull up by the pavement and roll down the rain-curtain, thus blocking the view from the road.
He sits in front. You sit at the back. He produces two small plastic glasses. He finishes a quarter bottle of cheap Indian whisky in three quick gulps.
Round 1: Pour whisky, add water and gulp. Repeat twice. I'm still sipping on the first drink.
"Hurry up," he says, "Yaar, ghar bhi to jana hai. Biwi ka phone aa raha hai." (Drink up buddy; I have to be home soon. My wife's already called twice.) 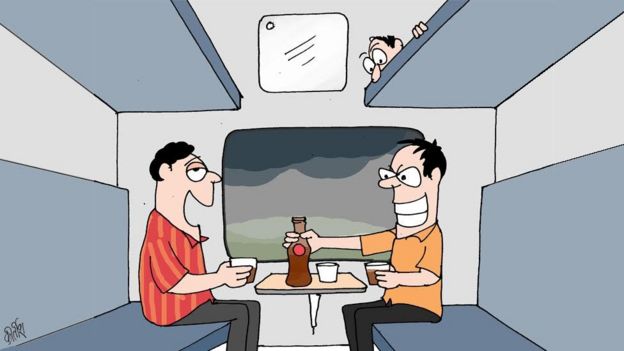 Nandlal, an auto-rickshaw driver, told me that hospital parking lots are the most peaceful places to drink in Dehradun.
You have your whisky, while doctors, nurses and patient's relatives go about their business inside. Occasionally, a corpse might stumble out and join you for a farewell pint. If you drink too much, you can always check in for the night. The rooms are whistle-clean; the sheets white and crisp.
Indians love drinking in their cars. As in Indian bars, the lighting is dim, the air-conditioning uncomfortably high. There are two types of car- drinkers.
The first is the wedding drinker.
His car follows at the tail of a wedding procession. The bar is in the boot of the car - also known as 'car-o-bar' in Hinglish.
[h=2]'Chicken point'[/h]The car crawls at a snail's pace, behind the procession. Every once in a while, when the procession halts to allow for dancing and the bursting of crackers, the car also stops. The boot of the car is thrown open; a flash mob forms around it. The men drink quickly and rejoin the tortoise parade.
The second type of car-drinker parks his car at a friendly "chicken-point".
Every north Indian town has one. This drinker, usually accompanied by a male sidekick, drinks at a more leisurely pace, the plastic glass safely ensconced in the bottle holder down by the gearshift. The chicken tikkas are passed through the window. The bass is full throttle. You sit in the dark eating and drinking. The blinking lights of the car stereo add to the illusion of being in a nightclub.
By now it should be clear to anyone unfamiliar with India that we Indians love to drink on the move.
We drink on trains even though it is illegal to do so. Some whiskies come in convenient plastic water bottles, which don't break. 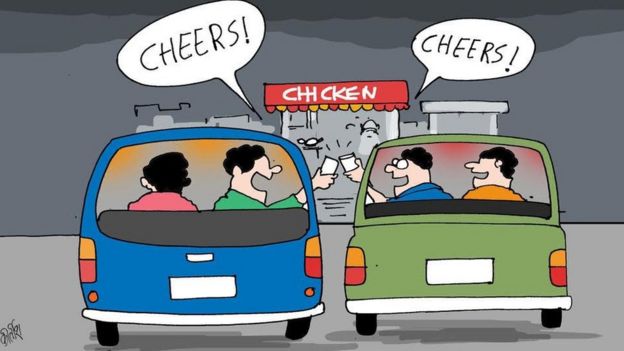 You board the train with your own supplies of pre-mixed rum and cola or whisky and soda in a plastic bottle. These homemade pre-mixes are called "party packs".
On long journeys, you only have to let the coach attendant know beforehand what you'd like to drink. The liquor is bought at a station where there is a longish stoppage time.
Once I was on the air-conditioned express train between Mumbai and Delhi. A family of Sikhs boarded the train. The men set up a makeshift bar outside, in the non-air-conditioned part of the compartment, where the entrance is. The toilets are a step away. They'd even got a couple of chickens (dead not alive) with them, which they sent to the pantry-car for a good roast. The pantry car worker was bribed with half a bottle of whisky.
[h=2]Protective gaze[/h]My most pleasurable drinking experience has been in the dingy backrooms of Bangalore's liquor stores.
There's a fan or two, wooden benches and tables. You can buy water, soda and some snacks. It's quite basic and made for no-fuss drinking. Class barriers dissolve here. Everyone from software engineers to plumbers stops by for a drink-on-the-go.
The whisky comes in small tetra packs, the kind you get soft drinks in. The last time I was in one such bar, they were all betting on cricket matches in the Bangladesh Premier League.
These backrooms have a framed image of goddess Durga - the Hindu goddess of power - hanging on the wall. When I asked a fellow tippler why, he said that Durga was the protector of drunks.
You go home on your motorcycle or scooter, swaying on two wheels, flailing your legs for balance like when you are learning to ride a bicycle, but under the watchful protective gaze of the goddess. 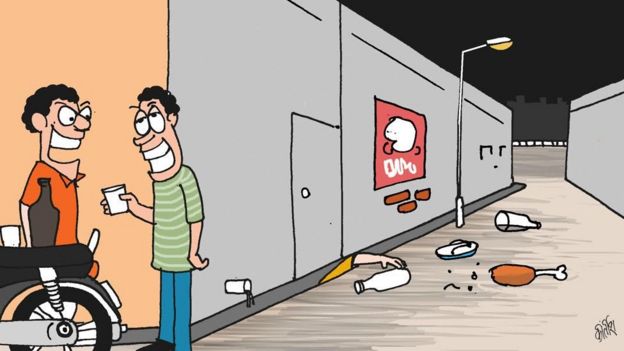 Since most Indians cannot drink at home, they are forced out on to the road. But you don't drink anywhere on the road. You find a quiet gali, or narrow lane, leading off the main road.
I live in a cul-de-sac at the end of one such gali. It's suitably dark and quiet. The streetlight is usually on the blink. You park your motorcycle; the seat doubles as the bar counter. I hear the loud voices of young men outside my window, usually on the weekends. They let out some loud burps, some expletives and a lot of steam, all in one go - a singular and unique sound - before heading home to their mothers, wives or hostels.
The other day, my neighbour's daughter accosted my father who was taking a walk outside our house.
[h=2]Act of defiance[/h]"Uncle," she said, pointing to an empty beer bottle lying in the bushes, "we should think about putting a gate at the entrance to this lane. See, so many bottles. Too many boys coming to drink."
In order to avoid her, so he could walk peacefully, my father came back inside our compound. He resumed his walk. As soon as he had done so, something caught his eye.
It was a whisky bottle lying innocently under the ageing silver oak in the garden. It had long been drained of its contents. A gali-drinker's doing no doubt. The drinker had then chucked it over the low boundary wall.
It could be that he was the conscientious sort and didn't want to litter the road. It could be that he was feeling emboldened by the drink and it was an act of defiance.
"Hey there," my father said to the neighbour's daughter, from this side of the wall, "what's it that you were saying? Maybe we should install a gate."
Palash Krishna Mehrotra's new book House Spirit: Drinking in India was published recently. Cartoons by Kirtish Bhatt.

The high class people drink at home / bars in star hotels; the lowest stratum never hesitate to drink at any place including home.
Only the middle class who want to drink but could not do at home because of resistance from family are having the habit as an outdoor sport.
K

I live opposite a bank[nationalised of course].

At lunch time, some from that place on hot summer day get into their car parked just outside my flat for a quick one before

returning to work. Since they get a bit high, the service is better in after noons. They are all smiles and loud.

My cleaning woman used to buy her husband a quarter every day so that he could drink home. Her logic -better he does it

home instead of doing it on the roads and falling on the roadside. He happily died with a quarter inside him and smile on his

L
12 Warning Signs That You're Not Drinking Enough Water