Share:
Facebook Twitter WhatsApp Email Share Link
When to Celebrate Sri Krishna Jayanthi, on Rohini Star date or Astami Thithi Date ?
The same subject was discussed in different way in this Forum in the year2012:

Note - in 2015, Sri Krishna Jayanti will be observed on September 5 in all regions in India. 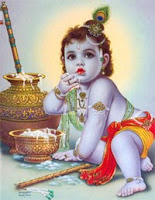 According to traditional Hindu astrology, Lord Krishna was born when the moon entered the house of Vrishabha (Taurus) at the Rohini Nakshatram (star) on the eight day (Ashtami) of the second fortnight of the month of Sravana (this corresponds to the month of Bhadrapada Krishnapaksha in North India).


The two different dates is because importance is given to Tithi – Krishna Paksha Ashtami Tithi in certain regions. Like in Maharashtra, Bengal and by some communities in Karnataka and Andhra Pradesh.


In North India, the date that has Krishna Paksha Ashtami and Moon sign Vrishabha (Taurus) is given importance.


In Kerala and Tamil Nadu, the date that has Krishna Paksha Ashtami and Rohini Nakshatram is given importance but this date has to be in Tamil Aavani Month and Malayalam Chingam Month.

Celebrating Sri Krishna Jayanti on two different days is more common in South India. In North India, to a greater extent there is uniformity.

(Confused!!! Krishna will be smiling at his birthday celebrations, all these calendars and confusion created by it. Krishna in Bhagavad Gita asks to rise above time, birth and death.)

Don’t mistake that this two different day celebrations are the result of difference of opinion among different sects in Hinduism. We feel a glitch because we think in terms of Hinduism, Hindu and India but not in terms of ‘Sanatana Dharma.’

The term ‘Hindu’ was first uttered two thousand years ago and origin of Sri Krishna Jayanti celebrations can traced back to thousands of years before that utterance. There were numerous regional traditions recognizing Sanatana Dharma in Bharath (India) before the coinage of the term ‘Hindu.’ These regional traditions had their own calendars and methods of celebrations.

The modern concept of Hinduism gained popularity with the arrival of European powers to India but the Vedic tradition is inherently diverse and it recognizes the different ways of celebrations.

How to celebrate or perform rituals on Sri Krishna Jayanti?


Please refer this link which will guide you


On the more obvious front, creating impressions of Krishna's feet during Janmashtami is simply a sign of welcoming the Lord to one's home. The Lord is the form of all auspiciousness. Hence by doing so it is a belief that one attracts all goodness in life. It is believed to be the closure of the dark days and the break of dawn with Krishna making His entry.

The spiritual significance of drawing Krishna's feet delves deep, beyond all beliefs on the superficial level. The foot prints drawn from the entrance of the house to the puja room signifies an inward turned mind. A mind that is focused outside of oneself is prone to get scattered.

A mind that swerves is not liable to experience the peace within. With the focus turned inwards while involved in day to day activities, helps the mind to be integrated thereby making way to bask in bliss.

The pooja room denotes the innermost part, the source of one's being. When the mind is turned towards its source, one invariably experiences the calmness of peace. The mind merged with the source is the goal of all spiritual pursuits which, is called Self realisation.

L
celebrate varamahalakshmi vratha at home when father in law passed away?

WHY DO WE CELEBRATE MAHASHIVRATRI?

Can a Hindu Celebrate Christmas
2