Despite being farther north of the Equator? 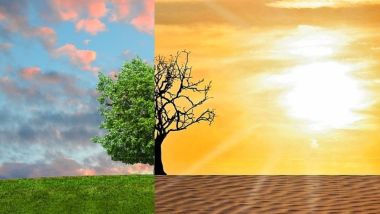 FinanceLatestly
Climate Change: Canada Warming Two Times Faster Than the Rest of the World!
According to the report, Canada's average land temperature has increased by 1.7 degree Celsius since 1948.

Wise after the event???

Biden says he'll respect 'personal space'
Responding to complaints that he made some women uncomfortable by touching them at political events, former Vice President Joe Biden on Wednesday released a video in which he pledged to be “more mindful about respecting personal space in the future.” Havovi Cooper has mo

Did Barr double bar the truth from getting out?

I know some lawyers can't zip their lips when it comes to telling lies but spitting on people!!!!

I would rather have an uneventful journey than such dramatic ones!

Lifestyle Yahoo Lifestyle
Newlywed downed 4 beers before flight, went on homophobic rant and attacked flight attendants on way to his honeymoon
The inebriated honeymooner was escorted off the flight as his bride shouted some choice words at her new husband.


News The Telegraph
Saudi Arabia close to building first nuclear reactor despite not signing up to international safeguards
Saudi Arabia plans to issue a multi-billion-dollar tender in 2020 to construct its first two nuclear power reactors and is discussing the project with US and other potential suppliers, three sourc


News The Independent
'Death sentence for women': Alabama proposes law to make abortion punishable by up to 99 years in prison
Alabama is proposing a law that would make carrying out an abortion at any stage of the pregnancy punishable by 10 to 99 years in jail. The strict abortion ban, which has been branded a “death sentence for women”, would even criminalise performing abortions in cases of rape and incest. The legislation, which Alabama politicians introduced on Tuesday, would only allow abortions in instances where there is “a serious health risk to the unborn child’s mother”.

Much ado about many things???

News Reuters
Hundreds gather near White House to demand Mueller report release
U.S. Attorney General William Barr, who received the confidential report last month at the close of Mueller's 22-month investigation, has said he intended to release a redacted version to Congress and the public by mid-April. The rallies were thinly attended, with about 250 people outside the White House and about 300 in New York's Times Square waving signs, singing and demanding the report, which is nearly 400 pages long excluding appendi

Yes there is more than one way to get at the truth!

News The Independent
Will Mueller's report ever see the light of day? Investigators will leak it if subpoenas fail, experts say
As a battle wages on between Congress and the Department of Justice over Robert Mueller’s report, investigators for the special counsel appear to be taking a stand. A new report describes

Now they are obstructing the release of the investigation reports!

FinanceCNBC
Trump obstruction evidence stronger than AG Barr suggested, some Mueller team members claim
Some people who worked on special counsel Robert Mueller's investigation believe evidence that President Donald Trump tried to impede the probe is stronger than what Attorney General William Barr publicly suggested when he cleared Trump of obstructing justice, NBC News reported. Prosecutors and FBI agents in Mueller's office could not agree on whether Trump illegally obstructed the investigation, according to NBC. Mueller submitted his final report to Barr on March 22.

The investigating tem was taciturn. Now the reports maybe kept a secret forever!

News The Independent
Trump investigation: Mueller team frustrated that 'alarming and significant' evidence of president's obstruction has not been revealed
Members of Robert Mueller’s team who worked on his investigation into Russian interference in the 2016 US election have reportedly expressed frustration over how the probe’s

The investigating team was taciturn. Now the reports maybe kept a secret forever!

News The Independent
Trump investigation: Mueller team frustrated that 'alarming and significant' evidence of president's obstruction has not been revealed
Members of Robert Mueller’s team who worked on his investigation into Russian interference in the 2016 US election have reportedly expressed frustration over how the probe’s

Man seems to have enough reasons to hate but not one to love!

Evading te taxes must have been easy but evading the requests for the tax papers!

The mouse does not work and goes to sleep after every click!
Images can not be posted any more.
Tabular forms can't be posted any more.
I am losing interest in posting!
Posting will be suspended from 10th to 24th inst.
We will be travelling, getting out of jetlag and relocating within U.S. during that period.
Last time the jetlag lasted for four weeks!
Does it take longer as we grow older????

News The Guardian
Mitch McConnell is destroying the Senate - and American government
Donald Trump speaks to the press alongside Mitch McConnell. Photograph: Brendan Smialowski/AFP/Getty ImagesNo person has done more in living memory to undermine the functioning of the US government than the Senate majority leader, Mitch McConnell.Yes, Donald Trump has debased and defiled the presidency. He has launched blistering attacks on Democrats, on judges he disagrees with, journalists who criticize him and the intelligence community.But McConnell is actively and willfully destroying the Senate.Last Wednesday he used his Republican majority to cut the time for debating Trump’s court appointees from 30 hours to two - thereby enabling Republicans to ram through even more Trump judges.McConnell doesn’t give a fig about the Senate, or about democracy. He cares only about winning. On the eve of the 2010 midterm elections he famously declared that his top priority was for Barack Obama “to be a one-term president”.Between 2009 and 2013, McConnell’s Senate Republicans blocked 79 Obama nominees. In the entire history of the United States until that point, only 68 presidential nominees had been blocked. McConnell’s long game is destroying what was once known as the world’s greatest deliberative bodyThis unprecedented use of the filibuster finally led Senate Democrats in 2013 to change the rules on some presidential nominees (but not the supreme court), to require simple majorities.In response, McConnell fumed that “breaking the rules to change the rules is un-American”. If so, McConnell is about as un-American as they come. Once back in control of the Senate he buried Obama’s nomination of Merrick Garland for the supreme court by refusing even to hold hearings.Then, in 2017, McConnell and his Republicans changed the rules again, ending the use of the filibuster even for supreme court nominees and clearing the way for Senate confirmation of Trump’s Neil Gorsuch.Step by step, McConnell has sacrificed the Senate as an institution to partisan political victories.There is a vast difference between winning at politics by playing according to the norms of our democracy, and winning by subverting those norms.To Abraham Lincoln, democracy was a covenant linking past and future. Political institutions, in his view, were “the legacy bequeathed to us”.On the eve of the Senate’s final vote on repealing the Affordable Care Act in July 2017, the late John McCain returned to Washington from his home in Arizona, where he was being treated for brain cancer, to cast the deciding vote against repeal. In a small town where people don’t lock their doors or windows, the first thief can effortlessly get into anyone’s houseKnowing he would be criticized by other Republicans, McCain noted that over his career he had known senators who seriously disagreed with each other but nonetheless knew “they had an obligation to work collaboratively to ensure the Senate discharged its constitutional responsibilities effectively”.In words that have even greater relevance today, McCain added that “it is our responsibility to preserve that, even when it requires us to do something less satisfying than ‘winning’.”Political success should never be measured solely by partisan victories. It must also be judged by the institutional legacy passed onward. The purpose of political leadership is not merely to win. It is to serve.In any social or political system it’s always possible to extract benefits by being among the first to break widely accepted norms. In a small town where people don’t lock their doors or windows, the first thief can effortlessly get into anyone’s house. But once broken, the system is never the same. Everyone has to buy locks. Trust deteriorates.Those, like Mitch McConnell, who break institutional norms for selfish or partisan gains are bequeathing future generations a weakened democracy.The difference between winning at politics by playing according to the norms and rules of our democracy, and winning by subverting them, could not be greater. Political victories that undermine the integrity of our system are net losses for society.Great athletes play by the rules because the rules make the game. Unprincipled athletes cheat or change the rules in order to win. Their victories ultimately destroy the game.In terms of shaping the federal courts, McConnell has played “the long game”, which, incidentally, is the title of his 2016 memoir. Decades from now, McConnell will still be shaping the nation through judges he rammed through the Senate.But McConnell’s long game is destroying what was once known as the world’s greatest deliberative body.He is longest-serving leader of Senate Republicans in history but Mitch McConnell is no leader. He is the epitome of unprincipled power. History will not treat him kindly. * Robert Reich, a former US secretary of labor, is professor of public policy at the University of California at Berkeley and the author of Saving Capitalism: For the Many, Not the Few and The Common Good. He is also a columnist for Guardian US

Maybe useful to someone here!