The tale of two epics

There is a school of thought that says that the Ramayana and the Mahabharata were written as a reaction to counter the rise of monastic orders, especially Buddhism.

Before Buddhism, India was dominated by the Vedic culture, which had no central authority. What bound the culture was an idea, known as the Veda that manifested itself through chants and anchored itself in ritual. From this came a social structure that was multi-layered and fragmented, influenced by many local traditions, with an overarching abstract dominating principle that we now call Vedic. But Buddhism changed all that.

With the arrival of Buddhism, there was suddenly a central authority, a monastic order or Sangha, with principles, rules and codes of conduct. It sought to bring wisdom to the common man in the language of the people. In a way, Buddhism united the subcontinent of India in a way that the Veda did not. The Veda was far too abstract for the common man; its wisdom remained restricted to an intellectual elite called the Brahmin.

The common man worshipped Yakshas, woodland spirits that inhabited the mountains and trees and lakes. They made them offerings of flowers and incense and food. The Yakshas were guardian gods and fertility goddesses that satisfied the immediate daily needs of the people. This worship had strong ritual and emotional constituents, but lacked an intellectual base. Since the Brahmins, lost in their chants and rituals, were indifferent to the needs of the common man, the intellectual gap was filled by the Buddha and his monks. He addressed the needs of the people in simple language. He answered the most fundamental question of humanity: why is there suffering in the world? Naturally Buddha became a star, to be adored, worshipped and even followed. In his presence, the Yakshas became inferior. Former gods became doorkeepers and companions of the Buddha.

Besides Buddhism, there were many other monastic orders flourishing in India in this period. The order, believed to be older than Buddhism, and that survives in India even today, but which did not have as much as an impact as Buddhism is Jainism. Like Buddhism, Jainism is also monastic. And it did have central authority. Historians are of the opinion that there were many other schools around 500 BC, known as the Axis age that sought to fill an intellectual void felt not just in India, but across the world. This was, it must be kept in mind, also the age of the philosophers in Greece and China. 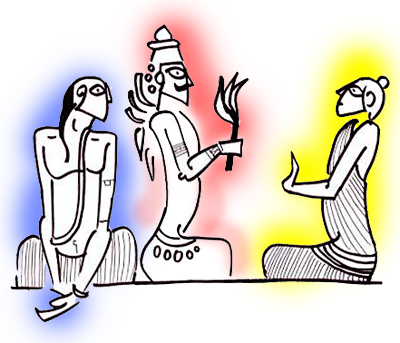 The tale of two epics - Devdutt

A hypothesis that the Ramayana and Mahabharata were reactions to Buddhism.

In ancient times, it was always the Kings who propagated the religion.

In the case of Bhuddism, it was King Ashokan who patronised it and imposed on his people all over his kingdom.

My view, I don't think, Ramayanam and Mahabharatam were written as a counter to Bhuddism. In Jain Sanskrit texts, there is a specific mention that Buddha met King Ravanan and counselled him prior to the historic war. And Ravanan was maha brahmanan who knew the four Vedas.

So Jainism / Bhuddism coexisted with Hinduism in history and saints debated against each other all the time to promote their views. Many schools of thought existed during this time and only a few survived in time. Some anecdotes of the different pilospohies exist via the puranam stories.

I feel the reason Bhuddism fell out of favour in india was because of the forcible imposition by King Ashokan on his people. Jainism continued to exist and flourish in Karnatagam right through history,
You must log in or register to reply here.
Share:
Facebook Twitter WhatsApp Email Link