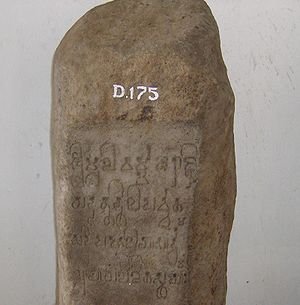 The inscriptions are not only in big cities but also in dark, thick tropical forests of Borneo and a Christian church in Malaysia as well. Mulavarman, a fourth century king did a Yagna and installed seven Yupa posts to commemorate it in Borneo island of Indonesia. It was discovered in an area covered by very thick forests. Egypt, Turkey, Syria, Iran and other Muslim countries have some written documents in the form of letters, manuals or inscriptions where in Sanskrit names or words figure prominently. Rama’s father was Dasaratha is a well known fact. But before him there were three or four Dasarathas and one of them ruled part of Syria ! He gave his daughters in marriage to an Egyptian pharaoh and wrote many letters to him!

According to many scholars, Mahabharata war was fought on Indian soil in and around 1500 BC (Hindus believe it was before 3102 BC) .At the same time there was a Dasaratha (Spelt Thusratta) ruling Syria/Turkey area which are Muslim countries now. That kingdom was called Mittanni (Mitra is one of the names of Surya). We have the Mittanni kings name in Sanskrit. It shows that Sanskrit language existed from the eastern corner of India to Egypt in Africa 3500 years ago. Dasaratha’s letters are very interesting to read. His daughters name are in Sanskrit and they were married to Egyptian King Amenothep (may be Amana Devan ).

We have even recovered a Horse Training Manual written in 1350 BC with Sanskrit words! For thousands of years horses and elephants were trained using only Sanskrit words. Sangam Tamil book Mullaipaatu mentions that elephants were trained by using Sanskrit words in Tamilnadu (Mullaipattau lines 32-36)The horse manual written by Kikkuli ( Aswa Sena) runs to 1080 lines on clay tablets. Though it is written in Hittite language the numerals Aika,Tera,Pancha, Satta, Nava vartaana (1,3,5,7,9 intervals) and words for colours are in Sanskrit.

We have the Vedic Gods name in an agreement in Bogazkoy in Turkey . This agreement was written by Hittite King Suppililiuma and Mittannian king Matiwaza (may be Mathi vachanan). The amazing thing about the agreement is the Vedic gods names Indra, Mitra, Varuna, Nasatyas (Aswins ) all are in the same order as in Rig Veda. Not even the order was changed. It shows that Vedas were used from the plains of Ganges to the land of Syria and Turkey at the same time- 1380 BC! In Vietnam (Champa in olden days) the Pandyan King’s name Sri Maran is found on an inscription. Sri Maran is a Sanskrit word for Thirumaran (We have one Muda Thiru Maran in Sangam Tamil literature). Please find more details in my article The Pandya King who ruled Vietnam.

In Karatepe ( In Turkey) we have found a long inscription which ended like Indian inscriptions. It is dated 850 BC. Those who deliver Indian religious discourses very often use a phrase, “so long as the sun and moon shines, this will survive-------“. Karatepe inscription finished with these lines which showed Indian influence. (The Egyptian King who installed only one God was called Aknaten (Eka Nathan= One God)! The Egyptian river Blue Nile was named after the Sanskrit colour Nila=blue! The word Syria is nothing but Surya (sun). Hurrian is also Suryan (sun). Iran is nothing but Aryan).

In Nepal Kings of Lichavi dynasty had issued more than 85 Sanskrit inscriptions between 463 AD to 770 AD. There were more than 3000 slokas in the inscriptions. In Rudradaman inscription we have beautiful slokas. It shows that people around the world, whether it is Cambodia or Indonesia or Nepal knew bombastic, stylish and ornamental Sanskrit language. All these inscriptions maintain high standards. Art Historian Sri C Sivaramamurti has shown how the greatest playwright Kalidasa had influenced these inscriptions from 2[SUP]nd[/SUP] century AD.

Catholic pilgrims in Malaysia go on a pilgrimage to Bukit Mertajam in Penang. They send petitions and thanks giving at the church of St Anne on 26[SUP]th[/SUP] July every year. Inside the church complex is the Cherok Tok Kun Inscription in Sanskrit. Unfortunately only a French historian copied it and published it in French. So we did not have the full text. So called scholars of western countries were partial when they dealt with Sanskrit. They invented new theories like Indo European, Indo Iranian, Indo Aryan ,Ancient, Middle, Later and confused the people. They did not use it for Hebrew, Greek or Tamil. Old Testament or Old Hebrew literature, Iliad and Odyssey, Sangam Tamil Literature were all written in the ancient or archaic forms of the respective languages. No Tamil could understand Sangam literature without commentaries. The spellings for the same Tamil names are different in Sri Lanka, Tamil Nadu, Pondicherry and Mauritius even today. Dhamayanthy and Subramaniam are written with four different spellings by four different Tamil communities!! But they don’t call themselves different people. But if it is Sanskrit, there will be 100 theories about it!

B. B Lal (Former Director General of Archaeological Survey of India) has shown that Indians migrated to West Asia and established Kingdoms like Mittanni 3500 years ago. Baudayana Srautasutra (18.44) mentions it. In the same way Agastya and Kaundinya led another group of Indians to South East Asia to establish Hindu kingdoms (Please read my article Did Agastya Drink ocean? And How old is Indian Civilization? )

L
Sanskrit Inscriptions in Mosque and on Coins

May 20, 2012
nannilam_balasubramanian
N
K
Is Zend Avasta the base for Sanskrit. In both the grammer seems to be same?

Tamil oldest language on earth, Sanskrit first in the universe?
2