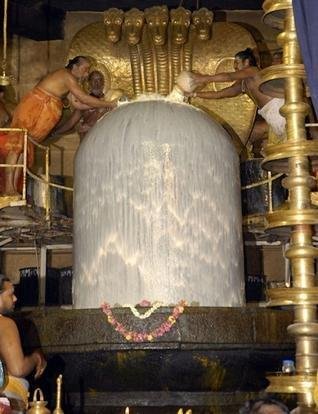 
Sanskrit and Computers
By S Swaminathan

An amazing thing about the computers is that even before the world invented the computer hard wares, Indian Sanskrit linguists had the software!

The Sanskrit language has 11,000 roots from which words are drawn, and Vedic Sanskrit comprises of 63 sounds in alphabet of its letters. Russian has 35 letters, Arabic and Turkish 22 each, Persian 31, Spanish 35, French 25, English 26, and Latin ,Tamil 30 + 1 and Hebrew 20 letters each. Sanskrit has 48 letters: 13 vowels, 33 consonants, one Anusvara, one Visarga.

In Sanskrit, there are 1700 dhatus (root verb), 80 Upasargas and 20 Pratyayaya. With this calculation, the number of words are written from the combination of two original words, this number amounts to 73858000.

Whilst carrying out critical study on computer processing of natural languages (NLP), computer scientists became interested in Sanskrit, in which the grammatical rules are so scientific and logical in manner that they closely resemble the structures used in computer science. For example:

1. A computer can only handle problems based on an algorithm. Such algorithm procedures are commonly found in earlier Sanskrit texts, covering not only the basic 8 mathematical operations (subtraction, multiplication etc.), but also the permutation combination operations often required in computer science.

2. Sanskrit script (Devanagari) is phonetic, not spelling based like English. This phonetic transcription property of Sanskrit is useful if phonetic instructions are fed to a computer or robot.

3. The position number system is the basis of computations. Europe is said to have used Roman numerals before they knew about the Indian decimal system and use of zero. However, it is difficult to outline even the simplest arithmetical operation like addition using Roman numerals.

4. The digital computer uses a binary positional system through combinations of only two digits, viz. 0 and 1. The numerical operations are similar to the standard decimal system. Reference to such binary combinations appears through Sanskrit texts on Chandas or poetic meters by Pingalacharya. The 3, 4, 6 or 8 lettered ganas aksharaganah generate the same sequence of laghu (0) and guru( 1 ) combinations as in modern digital computers.

In short, the characteristics of Sanskrit that attracted the attention of computer scientists are:
(1) Well knit syntactic and semantic structure of Sanskrit

(2) Positional independence of words in a sentence

The wide base of linguistics numerical algorithms, logic etc. used in theoretical computer science appeared through Sanskrit literature even while the actual machine hardware was still to come!
(Adapted from the importance of Sanskrit in computer science, by Dr Chandragupta s Varnekar, Nagpur university.Published in Hindu Youth 2001 magazine,London).

Panini’s Ashtadyayi is a master piece among the grammars of the world. It contains nearly 4000 sutras or rules. He never repeated any sutra. W.W.Hunter, the grammarian says, It stands supreme among the grammars of the world alike for its precision of statement and for its thorough analysis of the roots of the language and the formative principle of words. Patanjali, who wrote a voluminous commentary on Panini’s work, praised Panini as divine person. A popular saying in India even declares the study of the Mahabhasya of Patanjali as equal to the ruling of a kingdom.
Panini has listed about 700 activities and 2000 verb roots related to different aspects of these activities. In Sanskrit nearly all the nouns are derived from verbs by adding some prefixes or some suffixes. if one learns these 700 basic roots and the rules that govern their appendages, one can have a good command of the language.

It has been calculated that there are in existence over a thousand different Sanskrit works on Sanskrit grammar., all inspired, directly or indirectly, by Panini’s model: beside such a concourse the thousand manuscripts of Priscian’s Latin Grammar, the pride of our western tradition, are but a drop in the grammatical ocean We have also to remember that Panini himself acknowledges a number of predecessors, whose work, except for fragmentary citations, has been lost to us.—Burnell has listed by name no less than sixty eight of these Pre Paninian grammarians ( From Phonetics in Ancient India by Sidney Allen, OUP 1953, 1965).

Kanchi Paramacharya said Sanskrit lives for ever. It is like life breadth in our body. Certain languages are like Body. They have birth and death. Sanskrit is the soul and never dies. It lives in every language of the world. Kanchi Paramacharya’s composition Maitrim Bhajatha reverberated in the halls of United Nations in the 1960s. It shows Sanskrit poems are composed in the modern times and used as well. When the most famous Carnatic musician M S Subbalakshmi sang the song in the UNO, the world was spell bound. Sanskrit sound went into the nooks and corners of the world. Peoples of 200+ nations listened to it. He gave a clarion call to the world to stop fighting and develop friendship. Sanskrit did what other languages did not do.

One thing is certain. Sanskrit will live as long as India lives. All the important mottos of Government of India are from Sanskrit scriptures.

Satyameva Jayate found in the emblem (truth alone triumphs) is from the Upanishad.
Jana Gana Mana , national anthem, and Vande Matarm, national song, have got lot of Sanskrit words.

The motto of Lok Sabha (parliament) is Dharma Cakra Pravarthanaya (for the promulgation of the Wheel of Law).

All India Radio’s motto is Bahujana Hitaya, Bahujana Sukhaya (for the goof of the many, for the happiness of the many)

The Life Insurance Corporation of India’s motto is Yogaksemam Vahamyaham (I take responsibility for access and security). It is a line from Bhagavad Gita.

The Indian Navy has the Vedic motto Sam no Varunaha (May Varuna, the God of Waters, be auspicious for us).

Most of the Indian air carriers, submarines, trains, ships, rockets, spaceships, missiles,Tanks(military vehicles) have Sanskrit names from the mythology.

(Above mottos are taken from the book THE WONDER THAT IS SANSKRIT by Sampad and Vijay, published by Sri Aurobindo Society, Pondicherry).

Sanskrit will NOT die in India!!

Some scholars estimate that there are about one hundred thousand un published Sanskrit manuscripts and feel there may be even more.
Sanskrit scholar PV Kane has made a list of 870 authors. But it is not a comprehensive list. There are many more authors not found in the list.

Bhasa, a Pre Kalidasa Sanskrit playwright wrote thirteen plays. His master piece was Swapnavasavadatta (The Dream of Vasavadatta). He employed 230 characters in all his plays. He lived around second century BC.

Vatsyayana’s Kamasutra is the first proper book on sex. It contains 1250 verses divided into seven major parts and 14 smaller sections. It has got 36 chapters. This book also mentions 64 arts form.

I am very glad to know that lot of others including you, are also trying to spread the glory of Sanskrit.
I am pretty sure that Brahmins can revive this language.

I am very glad to know that lot of others including you, are also trying to spread the glory of Sanskrit.
I am pretty sure that Brahmins can revive this language.
Click to expand...

Dear Sri Swaminathan,
FYI. I have been teaching Sanskrit in Mambalam for the past 9 years, (though I myself am not much learned in it). Absolutely free.
OP
OP
L

You are doing a great service to Hindus and Indian culture by teaching Sanskrit. Tamils who know Sanskrit are the best citizens in India.Sanskrit and Tamil re like our two eyes.I have been teaching Tamil at the university and learning Sanskrit wherever and whenever possible.

We organised weekly Veda classes in London. It went on very well for two years till the priest dislocated his disc. He went for an operation. Then all stopped.Even now we used to meet and discuss Sanskrit related matters. What a joy you get when you know something new or when you teach something new!
Please continue your good work.

K
Is Zend Avasta the base for Sanskrit. In both the grammer seems to be same?

Tamil oldest language on earth, Sanskrit first in the universe?
2