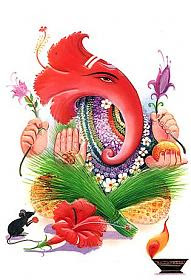 Lord Ganesha is the first God and he is the God of knowledge. Lord Ganesha is worshipped before the beginning of all actions including any new rituals. The name "Vigneshwara" is known to remove the hardest of all obstacles [Vigna] and allow success to his deities. According to each lunar month in Hindu calendar has two Chaturthi Tithis. The one after Purnimasi or full moon during Krishna Paksha is known as Sankashti Chaturthi and the one after Amavasya or new moon during Shukla Paksha is known as Vinayaka Chaturthi.

Sankata Hara Chaturthi or Sankashti Chaturthi or Sankat Ganesh Chaturthi is observed on the Chaturthi or Chavithi, Sankashtahara Ganapathi Vratam is the best and most affective among all types of worship done to Lord Ganesh. Specific day to do this Vrata is known to occur only once in approximately seven years. The occurrence is a rare combination and a simultaneous incidence of Magha masa, Krishna paksha (fortnight before the new moon day), Chaturthi tithi, Tuesday, and the time of Rise of moon.

According to Ganesha Purana, Lord Ganapathi is worshipped in two forms.

Lord Ganapathi worshipped in this form relieves us from all fears. He was worshiped by kuja (Mars) and he relieves from Kuja Dosha (Manglik Dosha) present in our horoscope. Sankashtahara Ganapathi was worshiped by Lord Yama and he also destroys the effect of sins in one's life. Legend has it that Parvati created Ganesha out of the sandalwood dough that she used for her bath and breathed life into him. Letting him stand guard at the door she went to have her bath. When her husband, Shiva returned, the child who had never seen him stopped him. Shiva severed the head of the child and entered his house. Parvati, learning that her son was dead, was distraught and asked Shiva to revive him. Shiva cut off the head of an elephant and fixed it on the body of Ganesha.

Ganesha is the god of wisdom and prosperity and is invoked before the beginning of any auspicious work. It is believed that for the fulfillment of one's desires, his blessing is absolutely necessary. According to the mythology, he is the son of Shiva and Parvati, brother of Kartikeya - the general of the gods, Lakshmi - the goddess of wealth and Saraswati-the goddess of learning. There are numerous stories in Hindu mythology, associated with the birth of this elephant-headed god, whose vehicle is the Mooshak or rat and who loves Modaks (droplet shaped Indian sweet).

The benefits and uses of Sankatahara Ganapathi Vrata are clearly depicted in Ganesha Purana as stories.

Among them: Being blessed with children, getting rid of the sin of Brahmahatya, getting rid of handicap, getting rid of Kuja Dosha (Manglik Dosha), to be become a king, cure of leprosy, to be free from slavery, control of anger, to escape from unexpected sudden ďeath, to get cured of TB, to be blessed with true knowledge, to get back lost articles, being blessed with one's desires, victory in war, blessings of Guru, vitality etc.. But many of the above mentioned benefits are not essential for many people in present generation. So devotees who worship Lord Ganesha do this Vrata to get rid of the obstacles for marriages, to be blessed with children, to meet lost relatives and to get relieved of all bad effects in their horoscope. This great Vrata which has immense benefits can be fruitful if done just for one day and gives a place in Ganesha loka.

"WHO KNOWS" what may be the situation when this great and precious day comes again. So let us make use of our excellent fortune to get close to our spiritual goals by doing this Sankatahara Ganapathi Vrata. Let us be blessed by the son of Sakthi who has Shakti !

Devotees of Lord Ganesh believe that if a person who observes Sankshta Chathurthi varat would collect lot of virtues. The person goes directly to the Swanand-loka (holly palace) where he can enjoy the prosperity and blessings of the Lord. There is a strong belief in Hinduism that a person takes seven births before she/he gets Moksha (salvation) but, the person who will do the Sankashta-Chathurthi will go Ganesh loka or Swanand loka directly and his rebirth will be stopped. If you want to lead a life of happiness, free from troubles and difficulties, you have to pray to Ganapathi, the remover of all obstacles.

Breaking coconuts is considered auspicious on Ganesh Chaturthi as when it is smashed on the floor it absorbs the negative energy from the atmosphere and thus ensuring your success henceforth in every venture you undertake. When you make proper use of your inherent intelligence and wisdom, you will be successful in life.

1. Wake up before sunrise, have bath and complete the daily worship of favorite deity.

2. Then prąy to lord Ganesha and make a wish (Sankalpam) to do Sankashtahara Ganapathi vrata.

3. Fast for whole day and have sacred thoughts all day.

4. In the evening bath with the powder made from seeds of white sesame and gooseberry (Tilamalaka churna).

5. Make an idol of lord Ganesha either with mud or turmeric powder. And prąy him to come and stay in that idol (Avahanam).

6. Worship lord Ganapathi with Dhoopa, Deepa and flowers. Worshiping with Durva is most important and mandatory.

7. One can worship lord Ganapathi with Durva twigs having three, five or seven leaves. We can worship with 21 or more twigs and at least one.

8. Chant any Ganesha mantra for at least 48 minutes.

10. Complete puja by the rise of moon.

11. Compulsorily see the moon. prąy to the moon and Chaturthi tithi and give Arghya to both.

12. After that, prąy to lord Ganapathi and say “sankaTaam maam nivaaraya” and ask him to relieve from all troubles, give Arghya.

13. Then offer Prasada to the devotees and take yourself.

14. All through the night one should be awake with chanting and worshiping lord Ganapathi.

15. Next day morning prąy to lord Ganesha and thank him for giving this opportunity to worship and prąy to return back from the idol (Udyapanam).

16. Then do the Ganesh immersion in fresh flowing waters.

Though the procedure appears to be simple, because of lack of habituation one may get some doubts regarding the Puja. Some of them may be as follows, for which I have taken answer from Ganesha Purana.
1. What are the most significant things of this Vrata?
A. Have been highlighted in bold (2,3,7,8,11,12,13).

2. Which flowers can be used?
A. Red colored flowers like China rose (Hibiscus) are favorite of lord Vinayaka.

Tulasi should not be used in worship of lord Ganesh except on Vinayaka Chavithi, so it is banned.

3. Which Mantra to be chanted?


4. What should be offered as Nivedya?
A. Modakas, Bananas, Payasam and Seeds of sesame.

5. When should we take Prasada?
A. Not in the next morning, we should take it that night itself 'after the rise of moon', after prąying to lord Ganesh and offering to devotees.

6. What are the easiest ways to pass the whole day memorizing lord Ganesh?
A. Reading Ganesha Purana, Preparing Nivedya. Singing and Dancing in the name of lord Ganesh in also good.

7. What if we don’t know about Arghya?
A. Better avoid unknown procedures, and prąy wholeheartedly.

8. What if we don’t know how to do the Vrata?
A. Better invite a priest and request him to do the Sankatahara Ganapathi Vrata for you. But compulsorily give the priest adequate money for his deed, immediately after completion.


Hopefully, the Sankatahara Chaturthi 2015 dates will help you to observe the rituals of Chaturthi in 2015 in the best way.