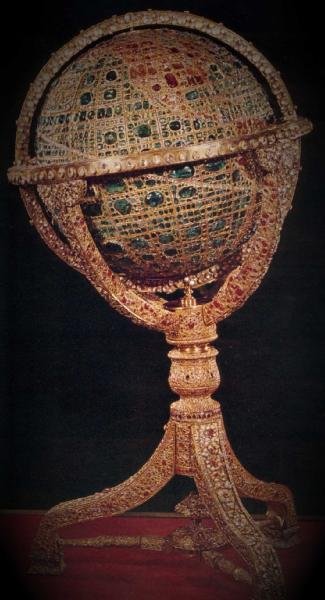 A gem studded globe of an Indian king is in Iran. The National Museum in Tehran has many Indian gem wonders. One of them is The Peacock Throne. The other one is a globe made of diamonds, emeralds, rubies and sapphires. 51,000 gem stones, mostly emeralds, are on the globe. The diameter of the globe is 18 inches and it is 44 inches tall. 35 kilo gold was used to make it. Emeralds are used to show the seas and rubies and spinels were used to show the land areas.

When the National Geographic Magazine published an article with a picture of the globe in 1990s it was valued Rs. 300 crores. Now it is valued above Rs.1000 crores or Rs 10,000 million!!

Persian king Nader Shah invaded India in 1739 just for gold and gems like Alexander and Mohmed of Gazni. He took lot of invaluable jewellery items to Persia (modern Iran). But it is believed that the Peacock Throne of Mogul emperor Shahjahan was broken into parts and shared by the commanders of his army. But there are different thrones in Tehran (capital city of Iran) museum taken from India. These are displayed items and there are many more items not displayed. The King of Iran who ruled before Khomeini’s Islamic revolution took lot of items with him when he left the country.

But the original peacock throne was more valuable than this. It was made up of over 1100 kilo gold and 250 kilo gem stones. But the Peacock Throne in Tehran Museum is not the original one. Even the famous Kohinoor diamond was part of the throne. Two Peacocks made up of gems decorated the top of the throne. French traveller Jean Baptist Taveriner was an expert in jewellery. He had given full details in his report.

Iranian Crown jewellery is the largest royal collection in the world. The most important items were from India. Several crowns, golden thrones and chains are in the vault of Central bank of Tehran.
Persian King Nadir Shah invaded when a weak Mogul king Mohamed Shah was ruling Delhi. A rumour was spread that Nadir Shah was killed in the battle. Enraged by this rumour Nadir Shah ransacked Delhi and his soldiers killed 30,000 people in one night. Mogul king begged to him to leave Delhi promising him all the treasures in the world. Nadir Shah took the most valuable jewellery including the globe and the Peacock Throne. But he was killed by the Kurdish while returning to Persia. Immediately his soldiers and Kurdish enemies divided most of the booty. 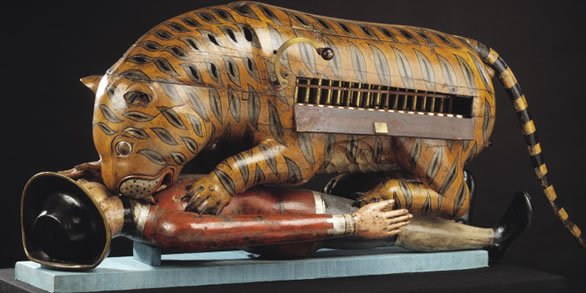 Tippu Sultan was the son of Haider Ali, King of Mysore. Haider Ali fought with the British rulers in India and was defeated. His son Tippu Sultan was the de facto ruler. He was very fond of tigers and believed that he would win like a tiger. He gave his soldiers tiger striped uniforms. He had lot of tiger artefacts in his collection. He made a mechanical wooden tiger toy with some clever mechanical and sound actions. The British took it from him in 1799 and now it is kept in London Victoria and Albert museum. Anyone who walks in to the museum can easily see it in a glass window. It is a life size toy prowling on an English soldier. It was made by French engineers who hated the British as much as Tippu Sultan.

The toy has a pipe organ like mechanism with a handle. When the toy is operated it makes noise like the growl of a tiger. The European soldier also cries in fear. The hand will move as if it is going to tear him to pieces. Tiger will try to devour the prostate European. The noise also varies according the movement of tiger’s mechanical hand. This is one of the main attractions of V & A museum. Nowadays they don’t operate the toy. But it is still in working order. India can be proud of such attractions displayed around the world.

Your India based articles are research/effort based work, as priceless as those antiques. You should blog them or pen under a separate thread.
They should not get lost among the daily discussions.
OP
OP
L

Thanks. I have uploaded over 160 articles in my blogs. They are preserved there for any one to look at anytime. There is no discussion or any chat. Just research articles. I will publish them as e books.
I will put them in the blog section of Tamilbrahmins when I get time.

There are 200 more research titles in my note books. It will take years for me to finish my research work.
Keep reading.
P

I look forward with interest to reading all your articles in the blog section and
would appreciate your letting me know when ready. They are invaluable jewels.

They are available in swamiindology.blogspot.com and tamilandvedas.wordpress.com. All the articles are uploaded the same day at tamilbrahmins as well. Only difference is they are preserved in the same space there, here it is scattered and pushed back when new posts come.