Push science, not myths; India’s future is at stake

Share:
Facebook Twitter WhatsApp Email Share Link
There are multiple posts (sudden increase) about mythology. They are posted in the Religious or sociology section.
So there is very little chance of being challenged or corrected. Who wants to "argue with a God who keeps promise" as if there can be a God who does not keep a promise. Who knows God? Why should he promise? Who should he promise to?
When we were children it is great to listen to stories, as children we were naive and gullible. When we reached adulthood we tried to find the hidden moral of these stories, and learn from them.

But for some, stayed at the child level, never graduated to adulthood to learn the moral values.

Prime Minister Narendra Modi has been in the news for suggesting that radars are affected by clouds and how he was possibly “the first person to use a digital camera in India in 1987 or 1988” during a television interview, that understandably has gone viral on social media channels.

Many scientists have been scathing about the tone and tenor of recent editions of the Indian Science Congress. This January, India’s scientific community was aghast to hear bizarre and fantastical claims by a few speakers purportedly to establish the glory of ancient India. For example, one academic claimed that Kauravas were born through stem cell and test-tube technologies and that India knew all about guided missiles thousands of years ago. And that theoretical physics — including contributions by iconic figures like Isaac Newton and Albert Einstein — is wrong.

This practice of mixing up science with mythology did not start with Mr Modi, but many feel that in the past five years pseudo-science has got a lot more legitimacy because those in positions of power are making odd and irrational statements.

There is no doubt that India’s Prime Minister is tech-savvy and obsessed with technology, which is all to the good. But it is important to recognise that technology comes out of basic science. And basic science does not prosper in an atmosphere of irrational superstition, myth making, myth-strengthening and trying to pass off pipedreams as historic events, as politicians from the ruling party have been doing, from the Prime Minister downwards.

If we do not arrest this slide into obscurantism, if we do not make a strong and conscious effort to foster rational thought and scientific temper, the vast majority of technologists being produced in India will continue to be condemned to writing software codes after the programmes have been thought up elsewhere, and to reverse engineer machinery that have been developed in other countries. We shall be like a nation of smartphone users where hardly anyone knows what is inside that phone, or how a particular app actually works.

Technologies of the new millennium have entered the world — artificial intelligence, medicine miniaturisation, renewable energy, clean mobility — and other technologies such as regular human travel through space or terraforming a planet are not far behind. All these stem from fundamental principles in physical and life sciences, and the basic test of a successful technology is its replicability.

Those who try to replace scientific rationale by myths are imperilling the present and the future of our nation. 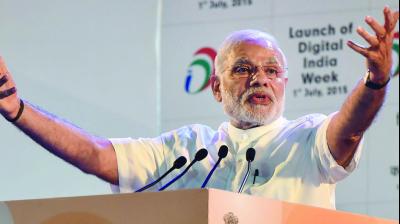 Push science, not myths; India’s future is at stake

The PM prides himself on being one of the most tech-savvy politicians and unabashedly admires all that smacks of the latest in technology.

V
Boeing's Make in India push: To invest Rs 1,152 crore to set up facility in Bengaluru