Navaratri in japan and greece

Nava Ratri, literally NINE NIGHTS, is the most popular festival among South Indian Hindu women. It is equally famous in Bengal where the last day of Nava Ratri is celebrated as Durga Puja. Dasara, literally ten day, is the biggest show in Karnataka.


Festivals similar to Navaratri were celebrated in different parts of the world including Japan, Rome and Greece. Indian temples are great centres of Arts. They were doing what Opera Houses are doing today in Sydney, London, Paris and New York. Even today South Indian Temples organise big music concerts and dance performances during Navaratri festival. Hindu women throng to temples during nine nights to see the illumination and decorations of temple idols.
In Tamil Nadu, Nava Ratri is a Toy and Doll Festival. They arrange toys in steps made up of wooden boxes or steps (look at the picture). 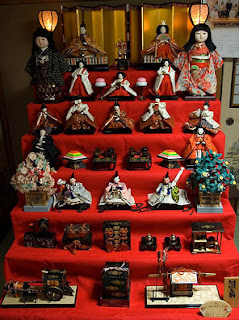 Japanese celebrate a Doll Festival like Hindu Navaratri. It is celebrated every year on 3[SUP]rd[/SUP] March as Girl’s Day. Navaratri is celebrated as Girl’s Day In India too. Young girls who are called Kanyas receive special box or bag full of Tilak/Kumkum, Turmeric powder, Mirror, Comb, jewels etc. with fresh coconut, betel leaves, fruits and flowers. Girls are treated as representative of Goddess. Girls come dressed in their new clothes.

In Japan they arrange dolls like Hindus arrange clay toys, dolls and other items. Japanese spread a red cloth on the steps and arrange the dolls. This festival is called Hina Matsuri (Girl’s Day). In India, the dolls represent mythological characters, shop owner (Chettiyar/shresti/Bania)with his saleable items, kings, national leaders, saints, musicians and ordinary men. In Japan they arrange the dolls of emperor, empress, servants and musicians.

Japanese have been celebrating this for over one thousand years. Indians have been celebrating it from time immemorial. Japanese started this as river festival of floating reed toys. Then they changed it to arranging dolls at home. It started after the spread of Buddhism. India might have influenced them in this matter. Japanese celebrate it for health and happiness of the girls. They also make special snacks like Hindus. They also invite friends to their houses and give them food.
In short we see amazing similarities in three things: 1) Arranging dolls on steps 2) Celebrating as girl’s/women’s day 3) Inviting girls home and giving them special food and gifts.
Hindus see God in everything, whether it is music or dance or drawing (Rangoli,Henna) or Food (Prasad. So Hindu Navaratri is more of a religious festival where as Japanese and Greek celebrations are more of secular things.

Greeks have also chosen Goddesses for the arts and poetry like Hindus.
The Muses are the nine goddesses of the arts, history and astronomy in Greece. The muses were not highlighted in mythologies, but writers and poets invoke them like Hindus before writing a book or performing dance and music. They are the source of inspiration for them like Goddess of Knowledge Saraswati or Goddess of wisdom, Ganesh.

Muses were among the retinue of the god Apollo, the patron of music and the arts. They were said to reside on Mount Helicon near Thebes or on Mount Parnassus near Delphi (Like Kailash or Mount Meru of Hindu Mythology).

Their names and branches of arts they preside over are as follows:


Though we don’t see many similarities between these Gods and Hindu Gods, each Hindu artiste worships different gods for different arts: e.g Sculptors-Viswakarma, Flutists –Krishna, Dance- Nataraja/Shiva and Poets-Saraswati.

Hindu women in South India divide the nine nights in to three X three (3X3) and allocate them to Lakshmi, Saraswati and Durga. In Bengal they worship Goddesses in different forms. South Indian temples decorate Goddesses in nine different ways during nine nights. If we go deeper we may see more similarities. But Romans and Greeks keep them in museums nowadays, where as Hindus keep them in temples and continue the tradition. 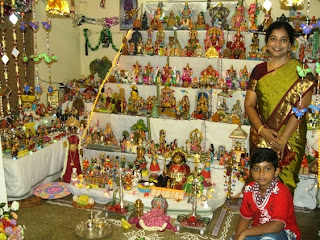 Please read other posts by London Swaminathan on

The important and attractive aspect of Indian Navaratri festival is the sundal prasadam prepared and distributed to the invities everyday.I don't think such an attractive practice is prevelant in other countries kolu.

I agree with you. Our Sundal is great and healthy.
That is the beauty of Hinduism. Even food is different for every festival or special occasion.
If one lists all the food items that will run into hundreds.
No religion or culture will have such a variety.
N

As Mr London Swaminathan has put it, Navaratri is celebrated in a grand scale
in Mysore and West Bengal. It is specifically arranged to honour the Goddess Durga.
Mr Swaminathan has nicely explained about the importance of the festival celebrated
over period of nine days. Actually, this event was started at the instance of Lord Brahma.
Lord Brahma gave a varam to the demon Mahishasuran, who is known as buffalo rider.
After getting the blessings of Lord Brahma, he started giving troubles to the people on
the earth and slowly started the Devatas too. In the process, Mahishasuran made up
his mind to kill Lord Indra. On hearing this information, Lord Indra and the Devatas
made an appeal to Lord Brahma, Lord Vishnu and Lord Shiva. On their humble appeal,
the Trios released part of their energy to have a combination and incarnate a magnificient
Goddess named Durga. In the process, to kill the Mahishasuran, Goddess Durga took different
Avatarams over the nine nights and finally Goddess Durga kills him. On the nineth day
Goddess Durga grabbed the demon under her foot and he was killed. Since Goddess
Durga took different Avatarams over the nine days, Goddess Shakthi is worshiped in
different forms over the nine days. The programme ends with Saraswathi Pooja, Lord Brahma's
wife.

I spent three months in japan - october to december. In october, inside the factory shop, one priest in ceremonial robes did a puja similar to the aayuda puja we do during navaratri. In november, around our diwali time, there was a big fireworks display arranged by the local municipality lasting for about 2 hours in the evening. About 25 years ago.
V

On the 9th day of Navrathri, in South India we celebrate it as Saraswathi Puja while in Bengal it is celebrated as Durga Puja

In Bengal Saraswathy puja is done in month of Magha (Tamil Thai;Jan-Feb).It coincides with ‘Vasant Panchami’ or ‘Shree Panchami’ which is the 5th day of the bright fortnight of the lunar month of ‘Magha’. In our colony too we celebrated this in a grand manner..Had traditional dum aloo, kichdi and chutney as prasadam
OP
OP
L

I think, like Monthly Shivrartri ,we celebrated quarterly Navaratris.
The Nayak kings of Madurai celebrated Vasantorchavam like our main Navaratri.
But I have to check the facts to confirm it.
S