Have'nt heard about this wind instrument naferi. Can you give some details?
regards
OP
OP
S

The word bansuri originates in the Sanskrit bans [bamboo] + swar [musical note]. There are two varieties of bansuri: transverse, and fipple. The fipple flute is usually played in folk music and is held at the lips like a whistle. Because it enables superior control, variations and embellishments, the transverse variety is preferred in Indian classical music.
Pandit Pannalal Ghosh (1911–1960) elevated the Bansuri from a folk instrument to the stage of serious classical music.[1] He experimented with the length, bore and number of holes, and found that longer length and larger bore allowed for better coverage of the lower octaves. He eventually pioneered longer bansuris with larger bores and a seventh hole placed a quarter turn inwards from the line of the other six finger holes
.
OP
OP
S

Bansuris range in length from less than 12 inches (called muralis) up to about 40 inches (shankha bansuris). 20-inch bansuris are common. Another common and similar Indian flute played in South India is the venu, which is shorter in length and has 8 finger holes. The index, middle, and ring fingers of both hands are usually used to finger the six hole bansuri. For the seven hole bansuri, the little finger (pinky) of the lower hand is usually employed.[3] 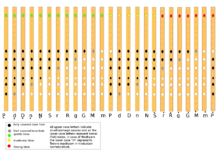 
The sound of a bansuri is generated from resonance of the air column inside it. The length of this column is varied by closing or leaving open, a varying number of holes. Half-holing is employed to play flat or minor notes. The 'sa' (on the Indian sargam scale, or equivalent 'do' on the octave) note is obtained by covering the first three holes from the blowing-hole. Octaves are varied by manipulating one's embouchure and controlling the blowing strength. Various grip styles are used by flutists to suit different lengths of Bansuris, the two prominent styles being the Pannalal Ghosh grip, which uses the fingertips to close the holes, and the Hariprasad Chaurasia grip, which uses the pads(flat undersides) of the fingers to close the holes[4]. While playing, the sitting posture is also important in that one should be careful not to strain one's back over long hours of practice. The size of a Bansuri affects its pitch. Longer bansuris with a larger bore have a lower pitch and the slimmer and shorter ones sound higher.
In order to play the diatonic scale on a bansuri, one needs to find where the notes lie. For example, in a bansuri where Sa or the tonic is always played by closing the first three holes, is equivalent to D, one can play sheet music by creating a finger notation that corresponds to different notes. A flutist is able to perform complex facets of Raga music such as microtonal inflections, ornamentation, and glissando by varying the breath, performing fast and dextrous fingering, and closing/opening the holes with slow, sweeping gestures.
OP
OP
S

The bamboo flute is an important instrument in Indian classical music, and developed independently of the Western flute. The Hindu God Krishna is traditionally considered a master of the Bansuri (see below). The Indian flutes are very simple compared to the Western counterparts; they are made of bamboo and are keyless.[23]
Pannalal Ghosh, a legendary Indian flutist, was the first to transform a tiny folk instrument to a bamboo flute (32 inches long with seven finger holes) suitable for playing traditional Indian classical music, and also to bring to it the stature of other classical music instruments. The extra hole permitted madhyam to be played, which facilitates the meends (like M N, P M and M D) in several traditional ragas.[citation needed]
Pandit Raghunath Prasanna developed various techniques in the realm of flute playing so as to faithfully reproduce the subtleties and nuances of the Indian classical music. In fact, he was responsible to provide a strong base to his Gharana by training his own family members. Disciples of the family like Pt. Bhola nath Prasanna, Pt. Hari Prasad Chaurasia, Pt. Rajendra Prasanna globally known for their melodious music.
Indian concert flutes are available in standard pitches. In Carnatic music, the pitches are referred by numbers such as (assuming C as the tonic) 1 (for C), 1½ (C#), 2 (D), 2½ (D#), 3 (E), 4 (F), 4½ (F#), 5 (G), 5½ (G#), 6 (A), 6½ (A#) and 7 (B). However, the pitch of a composition is itself not fixed and hence any of the flutes may be used for the concert (as long as the accompanying instruments, if any, are tuned appropriately) and is largely left to the personal preference of the artist.[citation needed]
Two main varieties of Indian flutes are currently used. The first, the Bansuri, has six finger holes and one embouchure hole, and is used predominantly in the Hindustani music of Northern India. The second, the Venu or Pullanguzhal, has eight finger holes, and is played predominantly in the Carnatic music of Southern India. Presently, the eight-holed flute with cross-fingering technique is common among many Carnatic flutists. This technique was introduced by T. R. Mahalingam in the mid-20th century. It was then developed by BN Suresh and Dr. N Ramani[citation needed]. Prior to this, the South Indian flute had only seven finger holes, with the fingering standard developed by Sharaba Shastri, of the Palladam school, at the beginning of the 20th century.[24]
The quality of the flute's sound depends somewhat on the specific bamboo used to make it, and it is generally agreed that the best bamboo grows in the Nagercoil area in South India.[25]

Sri/Smt siganeswarie
I think you are presenting the information on music from some book or website adopting the cut and paste technique.While it is very useful I suggest that you acknowledge the original source.Whenever we write an article the common practice is to acknowledge any quotation from other sources. Let me add that in this forum this practice is followed only by a handful of members.
OP
OP
S

all of the Muse

ShareThis Soulful, contemplative prayer chants for solo violin, evoking the silent power of the natural world, and the deepest yearnings of the indigenous heart. This CD features the powerful plaintive power of a solo violin, playing partly in Native American flute style, and partly in the style of a Jewish cantor. All tracks are improvisational in style, yet with a natural structure to musical line, giving an engaging dramatic arc.
This is Gary Schnitzer's 8th CD, and his latest. The music on this CD is a break with his previous style of music making. It reflects a long standing love of the Native American flute style of Carlos Nakai, as well as the time he has spent traveling in the American Southwest.
"Call of the Muse" is a Grammy Contender for "Best New Age Album", entry number 83, for the 2010 Grammy Awards. It was submitted to the ballot by the Grammy committee of the National Academy of Recording Arts and Sciences.

Staff member
Almost all of your posts are copy/pasted from other websites without proper credits.

This is termed as Plagiarism which is not allowed here.

Copy/pasting content should have the proper credits and must mention the original source.

V
A tribute to the life and music of Ghantasala