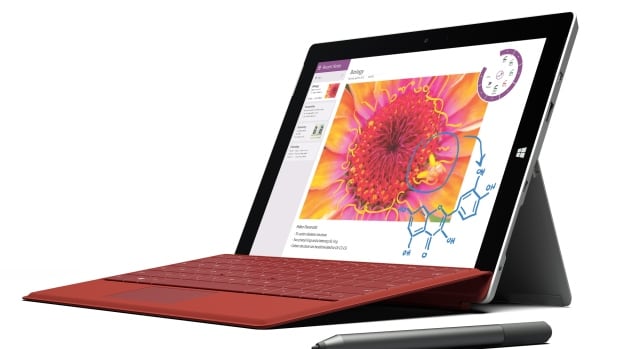 A few days ago, we reported on a rumor that the next Surface will run the full version of Windows instead of a useless appless watered down piece of Windows that is called Windows RT.

Now it seems those rumors are true, because Microsoft has announced the Surface 3, and it indeed runs Windows 8.1, and will later be eligible for an upgrade to Windows 10.

The next Surface has a 10.8 Inch full HD Display in a 3:2 ratio, enabling better ergonomics both in portrait and landscape modes. It is slimmer and lighter, and has a fanless design, which makes it all the more attractive.

Though this time, you only get three angles with the kickstand, unlike before when you could bend it in any position you wanted.

Underneath, it has an Intel Cherrytrail Atom Processor, which was just recently announced. It isn’t a speed demon, though, and you need to keep your expectations in line, because the Surface 3 won’t plough through apps like nothing.

This processor is combined with 2GB of RAM and 64GB Storage on the base Model, which can be expanded to 4GB RAM and 128GB Storage for a price hike.

It has a Battery Life of over 10 Hours of continuous Video Playback with conservative settings, which is pretty good.

It will sell for $639 for the base model, and $769 for the advanced model, which gives you more Storage and more RAM. LTE Connectivity also costs an extra $100. If you intend to use it as a makeshift PC, a typing Case is essential, and Microsoft’s official one will cost $130.

You can preorder it now, and you’ll receive it after May 5, when it starts shipping.

What do you think? Is the third time a charm?

Mar 19, 2015
biswa
B
V
Microsoft announces HoloLens: Merging the Real with the Unreal