Share:
Facebook Twitter WhatsApp Email Share Link
Ten years after winning a decisive war against terror, Sri Lanka is under attack by terrorists once again. The attack has indeed been devastating, reminding Sri Lanka of its horror of Tamil Tigers’ attack on its Trade Centre tower and airport. But there were no Tamil Tiger signatures, though suicide terrorism was involved, on the serial bombing in Colombo and other places on April 21. These attacks are a class by themselves, in their organisation and precision. Hotels and churches were attacked in eight blasts, killing more than 300 and injuring nearly 500 people. The possibility of further attacks are not ruled out. Intelligence alerts were sounded on April 11, but they were not heeded seriously.

One of the hotels under attack was in the close vicinity of the Indian high commission building as well as Temple Trees, the official residence of Prime Minister Ranil Wickremesinghe. This suggests that such important targets were also on the terrorists’ antennas. More than two dozen arrests have been made. Sri Lanka has been put under emergency regulations.

The IS links for the Sri Lankan terror are strongly evident. It is possibly trying to state that the US’s efforts to root it out will not succeed. The Sri Lankan blasts also suggest that the Islamic State has developed its base in south Asia. It may be recalled here that more than a couple of years back, the IS had announced opening a South Asia chapter. The Rohingya exodus from Myanmar must have provided new recruits to this chapter. There have also been repeated reports of Maldives feeding the IS and Maldives has diverse and multiple financial and political linkages in Sri Lanka.

The country’s failure in responding to the intelligence alerts against possible terrorist attacks speaks poorly of Sri Lanka’s law and order preparedness. This could be due to political confusion and differences within the Sri Lankan ruling coalition, especially between the president and the prime minister. Lapses on the part of Sri Lanka’s defence establishment, which is directly under the control of president Sirisena, have been publicly criticised by Prime Minister Wickremesinghe. It is time that such political differences and confusion, if any, may be addressed keeping in view the possibility of more such terrorist attacks. Sri Lanka has the principal responsibility to be fully prepared to confront the new challenge of terrorism.

The Sri Lankan development prepares a solid ground for countries like India, Sri Lanka, Bangladesh, Myanmar and Maldives to work together more extensively and effectively to counter terrorism in the region. This cooperation must extend beyond counterterrorism efforts and include fight against Islamic and all other religious radicalisation. 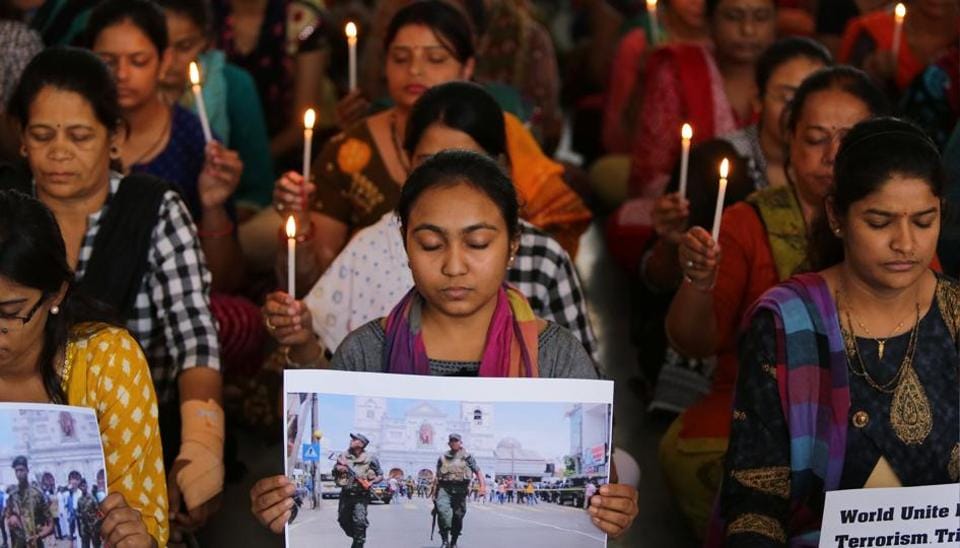 Isn't it terrible, hypocritical and tragic for right wing to blame S Lanka for intelligence failure (valid) and puff under the carpet, the colossal Intel failure @ Pulwama ??

Any rational counters without the abuse ??

Overall there isnt much international response to this bombing.
Its as if no one bothered.
Strange..cos if it occured in the west..it would be a total resurrection of reponse.

If bombings happen in African countries no one cares either.

The world is very selective in how it feels.

Who is to blame?

The video of one of the master mind behind this is a guy named Zahran Hashim who speaks chaste Tamil with no Sri Lankan accent at all.
K

Asian and african lives are cheap for westerners and the US.

If such an attack takes place in US like it did in 2001, there would have been a hue and cry calling for

US attacked the arab countries and left afganisthan in rubble . The country has not recovered so far.

It is a very unequal world.

India would have to play big brother to protect its neighbouring countries.

However these countries have a love hate relationship with india.

India would only be a loser if it meddles in these countries using its forces.

Indias" experience with srilanka in the past have been bad

Perhaps it is better if india lays off and does not go beyond sharing intelligence.

renuka said:
Overall there isnt much international response to this bombing.
Its as if no one bothered.
Strange..cos if it occured in the west..it would be a total resurrection of reponse.

If bombings happen in African countries no one cares either.

The world is very selective in how it feels.

yes,,,india is suffering terrorism last 70 yrs...but no one bothers...if it is west..the story is different...
OP
OP

Sri Lanka had refused to pay heed to India’s alert on possible suicide attacks and the involvement of extremists based on its belief that New Delhi is trying to pit Colombo against Pakistan by pointing fingers at the island's Muslim community.

Senior Lankan officials (defence secretary and police chief who have now been sacked) had claimed that India is trying to instigate Colombo against Islamabad by proposing counter-terror operations among the minority community in the island nation.

But this Easter Sunday, suicide bombers killed at least 253 people and injured some 500 at churches and top-end hotels across Sri Lanka, leaving the nation stunned.

Our neighbours are suspicious of our intent.

We play big brother to others in the region.

Srilanka had bad experience due to our intervention on tamil eelam issue.

Tamils there look up to india to resolve their issue.

into custody by them.

'When Hindus from Pakistan get citizenship, why not Hindus from Sri Lanka?': Kamal Haasan