How do you tell a story like the Ramayana?

Share:
Facebook Twitter WhatsApp Email Share Link
The story of the Ramayana is simple enough: once upon a time there was a king with three wives and four sons; palace intrigues force the eldest son into exile in the forest where his wife is kidnapped by a demon; he rescues her with the help of monkeys, and returns home to reclaim his throne; eventually he abandons his wife whose sojourn with the demon-king becomes the subject of street gossip. The simplicity is deceptive for the narrative creates a framework to explain key social concepts such as kinship, fidelity, property and self-image, which is why it is retold constantly, each retelling focussing on a particular theme or point of view. My book Sita, for example, evokes the Ramayana by bringing the Goddess to the forefront.

Contrary to popular belief, Ramayana has never been a single book by a single author, with numerous interpretations. It is a tradition with innumerable tributaries and branches, a centuries-old, open-source outpouring of generations of thinkers. A formal study of this Ramayana ‘river’ reveals the responses of the Indian psyche to various challenges of history. Three major challenges merit attention: the Buddhist challenge that placed value on monasticism, the Islamic challenge that placed value on ‘the book’ and, finally, the European challenge that sought to historicise what Hindus considered a timeless way of life.

In many ways, the Ramayana can be seen as a challenge to Buddhism itself. Buddhism anchored itself on the narrative of a prince who walks away from family responsibilities to become a sage, while Ramayana speaks of a prince who is forced to leave his home to uphold family responsibility and who returns from the forest, a triumphant hero, ready to reclaim the throne. Was that Valmiki’s intention? We will never know. Valmiki composed his tale around 500 BCE/BC, around the same time as the Buddha. The tale was transmitted orally before being put down in writing somewhere between 200 BCE/BC and 200 CE/AD. Astronomical details in them reveal that Ram lived around 5000 BCE/BC. Is that history or merely poetical speculation? We will never know, as there is no archeological evidence to back the claim. What we do know is that Valmiki saw Ram as a noble hero and king, not as a God, though there are traces of him being more than human. This noble Ram became the subject of numerous classical Sanskrit works such as the works of Bhāsa, Bhavabhuti and Kalidasa. He became the Bodhisattva in Buddhist works and the Baladeva in Jain works. His story travelled through sea-faring merchants to South East Asia where they continue to fire the imagination of the people there. But while this was going on, something more dramatic was happening in the Indian countryside.

Hinduism was undergoing a massive transformation. Old Vedic hymns and rituals were giving way to the Puranas and Agamas that brought theism to the forefront. This theism rejected Buddhist monasticism and agnosticism. God of the Puranas valued the householder’s way of life. Stories were told of how the hermit Shiva was seduced and turned into a householder by the Goddess Shakti, and of how Vishnu descended on earth in various forms to tackle family issues. Ram became one of Vishnu’s many incarnations. Temples were built in his honour. The oldest stone images of Ram as an avatar of Vishnu dated to 500 CE/AD, found in the Deogarh temple in Uttar Pradesh, testifies to firm establishment of Ram’s divinity, a thousand years after his tale was first told.

The next challenge came with the arrival of Islam. Suddenly, the ‘book’ became important. Yes, Hindus had books and Buddhists had books and Jains had books, but they mattered only to the educated elite and even they had no notion of a single holy book. Most people were illiterate. They did not read about gods; they heard their stories, sang their songs and saw it being performed in village squares and in temple courtyards by actors and dancers. No one really needed books to know God. But suddenly, from the tenth century onwards, the written word becomes very important. It marks the rise of regional scripts as well as regional literature, the first book invariably being a retelling of the Ramayana. The written books came to be enshrined and worshipped and treated with utmost reverence. It starts in the south, Tamil and Telugu Ramayana, then spreads to the east, with Oriya, Bengali and Assamese Ramayanas in the 14th and 15th centuries, and finally reaches the north with the creation of the famous Awadhi Ramayana by Tulsidas in the 16th century. 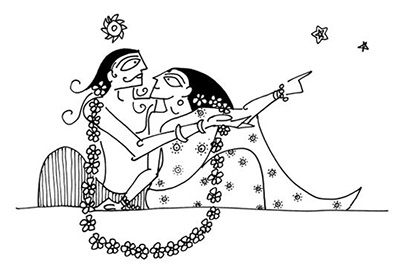 How do you tell a story like the Ramayana? - Devdutt

The epic is like a river. It flows where it will, resisting narrow interpretations.

N
Who is to Blame, Tell us

Latest : Contact lens that can tell you when you are sick

V
Facing cash crunch? We tell you how to switch over to e-wallets