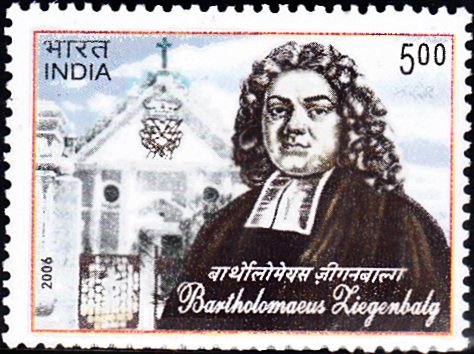 Bartholomäus Ziegenbalg was born to the wealthy grain merchant Bartholomew- Katharine in the year 1682 June 20 at Pulsnitz in Germany. The King of Denmark 4th Friedrich intended to send the monasteries to the colonies of the Danish East India Company and to commemorate the religious fervor. The Danish Lutheran church did not accept this. So the mission to choose missionary was held in Germany. Ziegenbalg was selected as a counsellor.

Ziegenbalg immediately began to serve God. Mr. Muthaliappa became an assistant to Ziegenbalg. Ziegan learned Portuguese and Tamil, spoken by the workers around him. He studied Tamil with an elderly poet. He translated 5,000 Tamil words through his translator Alappu.

He learned Tamil and Tamil characters using with his fingers in the sea sand.

He learned Tamil grammar literature and learned Tamil as his own language. Ziegenbalg established the first Mission School and the Children's Home for Indians who worked in the homes and gardens of Europeans. He also created a European Library of Bible, a book of the Bible and a book for the German soldiers who served in the Danish East India Company.

He also wrote some books along with his translating works. With the grace and en-devour supporting of the three nations' missionaries he bought one beautiful garden in the Poriyar village and founded three schools in Chennai as well.

The first Indian Protestant Missionarian and the first Indian Bible translator, Bartholomeu Zigenbalg lived only till the age of 37. He died on February 23, 1719 in Tharangambadi. His body was buried in front of the altar in the "new Jerusalem" temple he built in Tranquebar.

Here this quotes we now seen all the doctrine are same. Moving to other question we answered that the Vedas were written by Vedhavysar ...A human...
Click to expand...

Hindus do not believe that Vedas were written by VedVyasa or that it was his original contribution to humanity.

Your understanding of Hinduism is wrong to that extent.

Please read your scriptures again (if you are a Hindu) and you will understand that vedas are eternal knowledge. No one contributed them. They were not written by any body. They are "apaurusheya". If you do not understand the meaning please do some research.

Is a Hindu prayer different from a Christian or Muslim prayer?