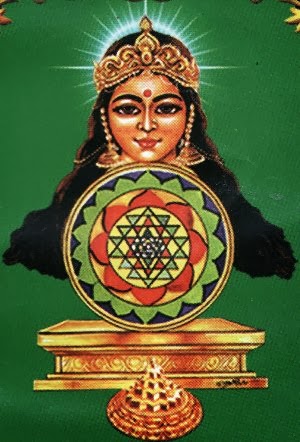 Prayaga Madhaveswari is one of the 18 Shaktippethas. She is also called as Alopi mata / Lalita
Sthala Purana of Prayaga : Prayaga means Prakrishta Yaga, that means it is the place where Lord Brahma did a very great Yaga. Hence its name became Prayaga. Prayaga is considered as one of the Sapta mokshapuras.

This place is also called as Theertharaj, that means king of all theerthas.

Here Kumbhmela will be conducted for every 12 years.

There are mainly three stories about the word Alopi. They are,

2)There are some other stories about Alopi mata. In every temple, at least one idol or one symbol will be there for worshipping the goddess. But here, there is no idol or symbol. We have to imagine the goddess present on a wooden jhula. Hence the name Alopi.

3)According to a local story, Alopi mata is a newly married bride. She disappeared from pallaki, when robbers attącked the marriage troop. As the bride disappeared as a miracle, she is worshipped as Alopi mata.

Swami Brahmananda(Rakhal), first president of Ramakrishna math, spiritual son and one of the best student of Sri Ramakrishna paramahamsa, saw the goddess here as a small child with three Jatas. Trijata.

How to reach the Prayaga: Prayaga is well connected by Road, Railway and Air routes.

Allahabad is very big railway junction which is at 6 km distance from Alopi temple:

Important places to visit in Prayaga:
1)Alopi Shaktippeth
2)Triveni Sangamam
3)Akshayavata vriksha
4)Veni madhav one of the Pancha madhava temples is another temple to see in Prayaga.