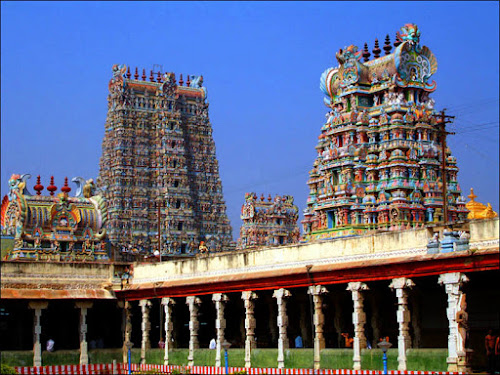 ( Based on Madurai ‘Indian Express’ News Report on 30[SUP]th[/SUP] July 1981)
Pictures are used from other websites. Thanks.

Ancient Tamils have used the principles of “vibration of bodies” in constructing musical pillars in Madurai Meenakshi Temple, according to a study made by a team of ENT specialists in Tamil Nadu on the acoustic beauty of this glorious temple.


The sculptors have cleverly varied the length and diameter of the pillars to obtain different musical sounds choosing the right type of stone. By using the same stone, but by varying the shape, they were able to achieve it.


Besides the medical team led by Dr S Kameswaran, Project Director and Chief of the ENT institute in General Hospital, Madurai, geologists, musicologists and audiologists took part in the research. HRCE of Tamil Nadu Government funded this research project.


The study team is of the view that the temple is an ‘acoustic marvel’. The noise level at the Ashta Sakthi Mandapam situated near the road was only 40 decibels during non visiting hours. Near the Lotus Tank and adjoining sanctum sanctorum (Garba Gruha), the sound level is again in the order of 40 DB. With this ambient noise it is possible for a person to contemplate and meditate the divinity. The sound level recorded during the peak hours in the evening is of the order of 70 to 80 DB. What is remarkable is there is absolutely no echo in any part of the temple and even with all the crowd around, the sound level seldom exceeds 80DB. There is built in mechanism for containing the echo and at the same time, the total noise does not exceed a specific level.


The artisans who built this huge temple must have been aware of the basic principles of acoustics. The huge icons on the unpolished pillars, the distribution of vents, the allocation of open spaces all around, are all mechanisms to contain the noise level, says the study team. 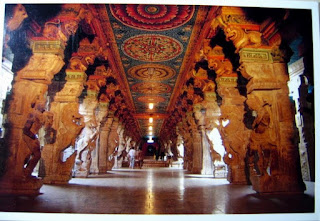 Again, the Hall of Thousand Pillars is a classical example of perfect sound engineering technique. The hall has got very low ceiling with 985 pillars—each pillar averaging about 12 feet in height. All are exactly of the same size and shape and at mathematically accurate positions. Many can sit in this echo resistant hall to hear the entire proceedings in quietitude.


The team which also studied the architectural beauty of the Meenakshi Temple saw an interesting feature of the floor in Kambaththadi Mandapam in the outer prakaram (corridor) in front of the Lord Sundareswarar. One finds large square slabs arranged from end to end covering conduits carrying drinking and drainage water separately and admired the perfect example of hygienic planning of the ancient architects. Even in recent times, with heavy downpour, one seldom sees stagnation of water inside the Mandapam.


Please read my earlier post : THE WONDER THAT IS MADURAI MEENAKSHI TEMPLE

R
I marvel the science and technology!