Gold Member
Greek and Indian Mythology are two of the oldest mythologies known to man. Although both of these mythologies have no established connection with each other, yet they share some striking similarities.

Here are some interesting things that you will find common in both these mythologies.

The most important similarity that comes to anyone’s mind is the uncanny similarity between Zeus and Indra.

Not only both of them are King of Gods in their respective mythologies, but even their weapon is almost same.

The similarities do not end just with their position or weapon, even their abode is quite similar. While Zeus stays at Mount Olympus, Indra stays at Mount Meru.

Both of them also share some striking character traits.

Just like Zeus and Indra, Karna and Achilles also share a lot of similarities. The most striking similarity is their armor. Both of them had a kind of impenetrable armor which almost made them invincible. Both of them were some of the most skilled warriors in their respective epics.

Not only that, just like Achilles, Karna too was a demigod. And before the war, both of them were requested by their respective mothers not to participate in the war.

If we read the epic carefully, then we can understand that it was the death of these two warriors that eventually led to the end of both wars.

Apart from Karna, Achilles has also been compared with Bhisma, as both were born to a water goddess.


3. The Trojan War and Ramayana​

Another very interesting similarity is between Ramayan and the Trojan War. Both of these great wars were fought for a woman.

The presence of a kind of a holy trinity can be found in both of these mythologies. In Indian Mythology, in spite of all the other Gods, Brahma, Vishnu, and Maheshwar are considered to the three most important Gods.

Same way, in Greek mythology, you have Zeus, Hades, and Poseidon who respectively rule the heavens, the underworld, and the seas. They are considered as the three most important Gods according to Greek mythology.

5. A God for everything​

A very striking similarity between both these mythologies is that you have a God for everything. Just like us they also have a God of wealth, wisdom, and underground.

Not only that, just like us they also have a specific messenger of God and also the chief architect of Gods, just like our Vishwakarma.

Hades and Yama are two very similar characters. Both of them are the lords of the underground.

But interestingly, both of them are not evil. They just assign a person a place in Hell or Heaven, based on their virtues and vices.


7. Saptarishis and the seven sisters​

In Greek mythology, these seven sisters are known as the Pleiades. Just like the Saptarishis, they are also a cluster of stars.

The story of Icarus and Daedalus is probably one of the most told stories. Interestingly, this story has a parallel in Indian Mythology as well. Just like them, we have the story of Jatayu and Sampati.

One day when they were flying high in the sky, Jatayu went too close to the sun, so Sampati, in order to save Jatayu, went after him. Although he did save Jatayu in the process, his own wings got burnt because of the heat of the sun and he fell straight to the ground just like Icarus.

Both of them act as messengers and both of them are sons of two most powerful Gods in their own respective mythologies. They share a lot of similar characteristics traits as well. 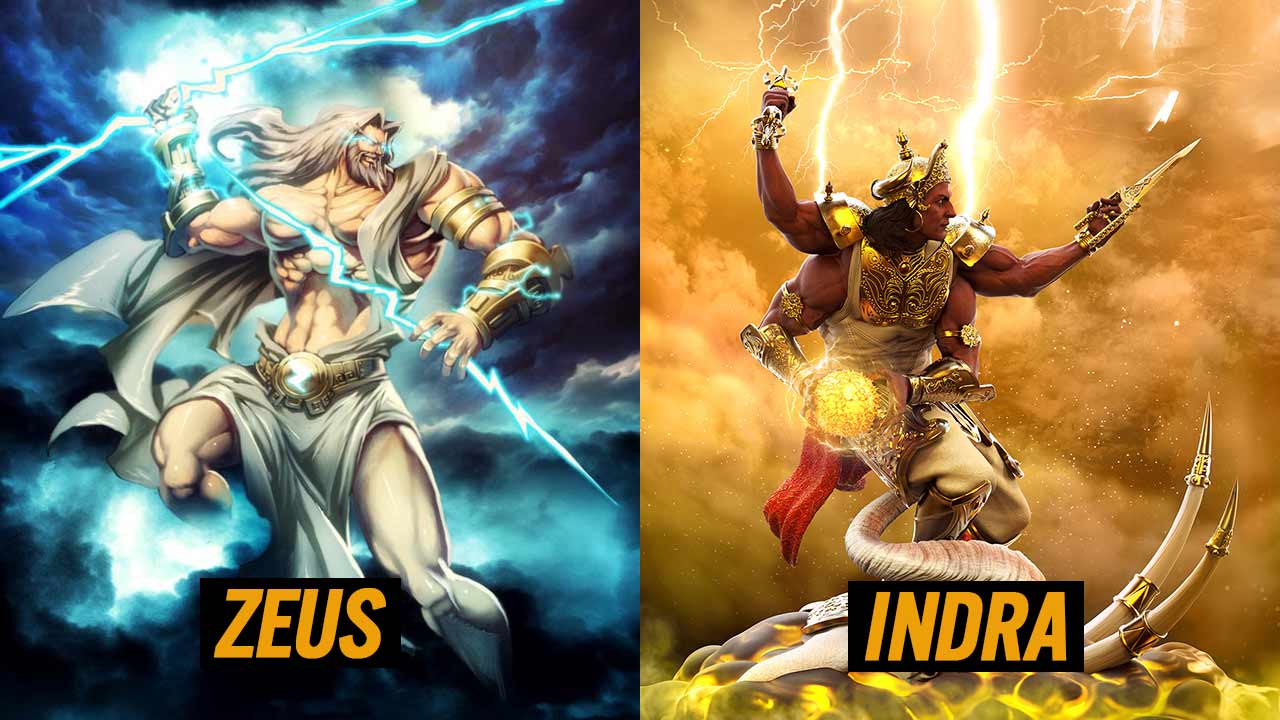 This is not Greek to us.

Gold Member
“When we talk about global village, I would like to see a Chinese author write about Hinduism. Would that be different from a European’s view?” says physician turned mythologist and author Devdutt Pattanaik as he opened his seminar at India International Centre (IIC) in Delhi on the topic “From Apollo to Dionysus, Vishnu to Shiva: Mythological connections between Greece and India.” An enthusiast of mythology and ancient philosophy, Pattanaik began his lecture by underlining the need for understanding the contribution made by ancient Greek philosophical concepts in order to appreciate the modern pluralistic global order.

“Greek mythology plays an important role in our understanding of concepts like ‘democracy’, ‘justice’ and ‘nation-state’,” said Pattanaik. He went on to explain that to draw links between Indian cultural concepts and those in ancient Greece is not to say that both had the exact same representation. However one might appreciate the fact that there are connections with different depictions, depending on the socio-cultural setup of each. “You don’t need to appreciate ‘the’ truth, you need to appreciate ‘a’ truth which may not accommodate all truths,” he says. 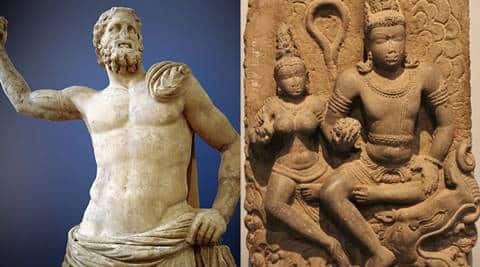 Similarities between Greek and Indian mythology, in the eyes of Devdutt Pattanaik

“Greek mythology plays an important role in our understanding of concepts like ‘democracy’, ‘justice’ and ‘nation-state’,” said Pattanaik.

When the Greek ambassador and historian Megasthenes visited the court of king Chadragupta Maurya in Pataliputra, he is believed to have made references to Lord Krishna in his work, ‘Indica’. However, Krishna in Megasthenes’ account is addressed as the Greek half-god, Heracles. Scholars have deciphered Megasthenes’ reference to Heracles as “Hari-kula-es”, meaning the clan of Hari, thus associating it to the clan of Krishna. Pattanaik said that the association might be purely accidental, but one cannot rule out the possibility. This apart, there are some striking similarities between the mythology of Heracles and Krishna which are hard to ignore. For instance, the image of Lord Krishna fighting the serpent Kaliya can be found reflected in the image of Heracles fighting the Hydra, a serpent with many heads.
OP Hindu and Greek mythology: How similar they are

I have read "The Iliad" and "The Odyssey". I felt the "Odyssey" was more like a collection of short stories and each adventure (Sirens/Cyclops/Circe etc) could be read independently. I have also read fairly elaborate versions of the Indian epics and also listened to discourses by Thirumuruga Kripanandavari and Balakrishna Shastrigal. Personally I prefer "Ramayana" and "Mahabharatha", the latter in particular for the many Upakathas which I feel are very neatly and coherently woven into the epic.

I am ready to accept that Homer is a person of History - there are many surviving sculptures of this Greek poet.

But, there is so much mythology attached to the authors of the Indian epics . Valmiki was lost in penance/ meditation for years (or ages?) that a huge mound of sand (like an anthill i.e. Valmika) formed over him. And in case of Vyasa, he invoked Ganapati who broke off part of his tusk to script the verses of the Mahabharatha as narrated by Vyasa. I have to discard the myths surrounding the two poets if I have to accept them as persons of history or think of the poets themselves as mythological characters.
Last edited: Jan 24, 2021

greece and athens area started preaching and explaining about greek gods and godesses....

greece and athens area started preaching and explaining about greek gods and godesses....

The very mention of Greece evokes Euclidean Geometry and Aristotelian Logic - the foundation for modern analytical thinking. The golden age of Greece was during the time of pagan faith when they worshipped Athena as the Goddess of learning.
I did not have an opportunity to see the movie you mention but most certainly the Greeks did not benefit from the sermons of Peter or Paul. I do not know if their faith in the only begotten son (Jesus) ensured that their souls did not perish and got everlasting life (John 3:16) but certainly their golden period of learning and wisdom perished.
Last edited: Jan 26, 2021

ekaputra said:
The very mention of Greece evokes Euclidean Geometry and Aristotelian Logic - the foundation for modern analytical thinking. The golden age of Greece was during the time of pagan faith when they worshipped Athena as the Goddess of learning.
I did not have an opportunity to see the movie you mention but most certainly the Greeks did not benefit from the sermons of Peter or Paul. I do not know if their faith in the only begotten son (Jesus) ensured that their souls did not perish and got everlasting life (John 3:16) but certainly their golden period of learning and wisdom perished.
Click to expand...

i saw the movie death of jesus ....then aphostles of jesus.....both in online movie in tubi.com ..you can try...

peter even went to Athens and preach abt jesus in greek temple....particular abt resurrection of jesus..

very interesting and informative about greek gods/godesses..they mentioned about many great

The Greek ideal of beauty (you have fallen for that)
The Indian Ideal of beauty is different.
Then again we think of Indian Gods in the old of Raja Ravi Verma's painting.

prasad1 said:
The Greek ideal of beauty (you have fallen for that)
The Indian Ideal of beauty is different.
Then again we think of Indian Gods in the old of Raja Ravi Verma's painting.

The Goddesses of Raja Ravi Varma's painting are again very homely and motherly looking with a BMI of above 24 I feel.
OP

WHEN FAT WAS IN FASHION​

One glance at the art of Rubens, however, shows that this was not always so—obviously, thinking fat used to be the thing. The opulent fleshy beauty of Rubens's women probably made the leaner ladies of his day frown when they patted their own meager stomachs, and wish they could compete in the big leagues.

Yet today the very name of Rubens is apt to produce a reaction of disgust. Those puffy knees, those bumps and hilts of flesh have never had less fashionable appeal than right now, in the very year of Rubens's 900th anniversary.

WHEN FAT WAS IN FASHION (Published 1977)

article on obesity and changing concepts of beauty throughout the centuries cites paintings of Peter Paul Reubens; illus

As usual, we are digressing from the original thread.
OP

renuka said:
The Goddesses of Raja Ravi Varma's painting are again very homely and motherly looking with a BMI of above 24 I feel.
Click to expand...

Beauty is in the eye of the beholder.
Similar threads