Quite a lot of emails are received saying ' you have been selected to receive
X dollars lying in Y bank. Please send your bank account details. we will remit
the amount etc' . Beware of these mails and do not open any mail from unknown
persons because they will steal your pasword and any secret data you might have
stored in your computer.
M

"There is a sucker born every minute"
---attributed to P T Barnum the circus founder.

The human mind is forever looking for making a killing in monetary affairs by hook or crook and when demand meets supply there is a disaster most of the time.

Full version of the song in http://www.tamilbrahmins.com/general-discussions/9314-a.html#post145572
(attributed to ஔவையார் in retaliation to ஓட்டக் கூத்தர் snide remark of the poetess )

In Tamil, the numbers eight and quarter are represented by
the letters "a" and "va". "ettEkaal latchaNam" is therefore
"avalatchaNam"(ugly). Eman = yaman; pari = horse = vehicle;
"EmanErum pari" is therefore erumai(buffalo), the vehicle of Yama.
The vaakanam (vehicle) of periyammai (another deity).
is a donkey. "muttamER koorayillaa veetu" means "a house
without a roof on top", a rather unflattering reference.
kularaaman RoodhuvanE = kularaaman + thoodhuvanE
= the messenger of Rama
= Hanuman
= monkey

That is a choice list of insults: ugly, buffalo, donkey, roofless house
and monkey.
The last line which breaks down to "aarai + adaa + chonnay + adhu",
could be interpreted as "it is the *aarai* that you referred to
thus" or as "who did you address thus?" (aar = who)
M

Let me add to the above comment. The poem is a retort I heard against Kamban and not oTTakkUththar. But it does not matter. I read it as kamban and avvaiyar engaged in a satiric argument when Kamban asked avvaiyar to answer a riddle in his poem which started as " நாலிலைப் பந்தலடி..." ---four-leafed creeper plant---(I don't recall the remaining lines right now). It also contained veiled abuses. There were so many "அடி" in the poem. Those were integrated into the words to make another meaning such as "bottom", "foot" etc., Still avvaiyAr took offense to that word since it is a form of addressing a younger or inferior woman, and decided to pay him back by using veiled abuses and ending with "அடா" at the end.

Now she gives counter-abuses as ugly, buffalo, mUdEvi 's mount which is a donkey(elder sister of SridEvi referred to as periyammai), kuTTic cuvar (roofless enclosure) normally used as an adjective for an ignoramus, and Rama's messenter, hanuman (monkey---another abusive term). The straightforward abusive term in the last line is "whom do you think you are addressing". But she was actually answering the riddle in the last line. When Kamban said "nAlilaip pandalaDi..." and a few other features of the creeper plant, avvaiyAr knew what it was. The creeper is "aarai" which is a species of spinach (ஆரைக் கீரை). She said in short, "You moron, you are talking about ஆரைக் கீரை.

A similar duel between two poets:

Is this correct? Second part answer does not look correct

mskmoorthy said:
Is this correct? Second part answer does not look correct 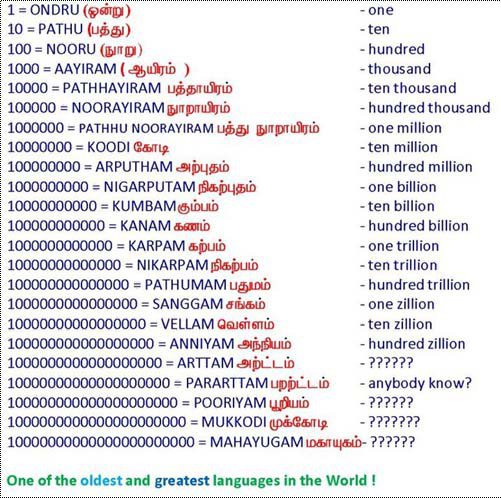 When I said they are nelmaNigaL I was kidding about the zillions, and quadrillions, and mygoodnessillions. As of now nobody knows what sanganidhi and padumanidhi are. I was under the impression that sanganidhi represents the conch and padumanidhi represetns the lotus flower. Apparently these two names are mythological, being included in the nava nidhis of Kuberan the caretaker of all heavenly jewels. Imagine when Srinivasa (of tirumalai) wanted to wed Padmavati it is said that he borrowed money from Kuberan. I don/t know if he returned it later!!!!!!!!!!!

Whatever they are, they are considered precious since Kuberan had them.
M

I read from net sources that Chennai's Kalaignar has appropriated sanga nidhi as his great-grandson. Stalin's grandson is called sanganidhi, I understand. I wonder who has paduma nidhi now that the two are separated!!!!!
M

sanganidhi is 100 times that of padhuma nidhi according to the above. But it doesn't jibe with the figures given in post #16.
I don't want either of these two nidhis. Just leave me alone!!!!!!!!!!!!!!

Dear Sankara Narayanan Sir,
Knowing that he is dealing with a very shrewd person he has demanded only 17500/-from you .. other wise it would have been in lakhs!!! LOL