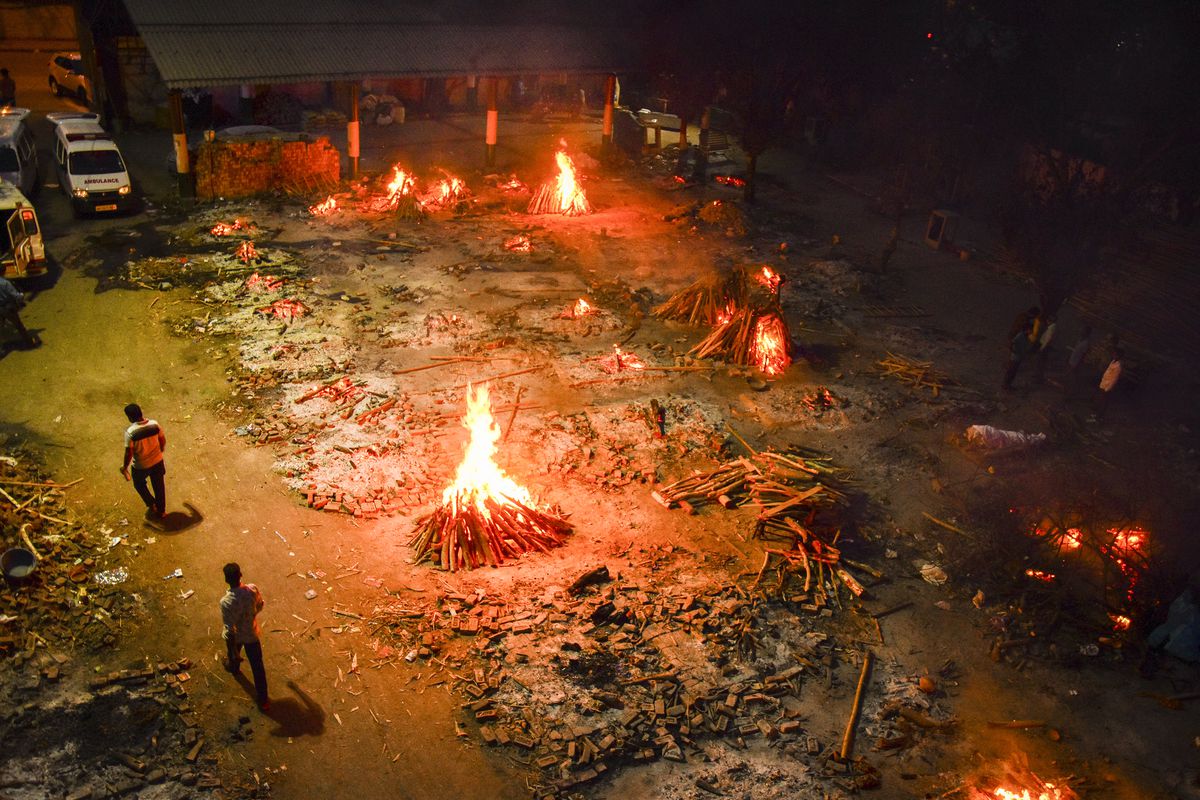 Funeral pyres of people who have died from Covid-19 seen burning during a mass cremation at a crematorium in New Delhi, India, on May 3. SOPA Images/LightRocket via Getty Images

Weeks ago, the Indian capital ran out of space for its dead.

New Delhi’s public parks and parking lots were converted into sites for mass cremations of Hindus, Sikhs, and Jains. Cremations are an important Hindu funeral ritual, but Indian crematoria declared that they were out of wood for pyres, and burial grounds for the city’s Muslims and Christians reached capacity.

As the current wave of India’s Covid-19 epidemic has claimed tens of thousands of lives and infected hundreds of thousands each day, aerial photographs of grounds strewn with burning logs and piles of ash have made their way to the front pages of international newspapers and spread across social media.

On roads outside overflowing hospitals, desperate people await beds for relatives dying in their arms, and the bereaved break down. Inside, photos capture patients preparing to face their fate even as health care workers go about the work of keeping them alive. Then there are the pictures of front-line workers performing final rites — lighting pyres and lowering bodies into graves — of those they don’t even know.

These smoky compositions, punctuated by PPE-adorned figures, will be the defining images of India’s coronavirus nightmare. As an art critic, my work revolves around seeing and responding to images through language. Now, I find myself at a loss for words, dwelling on banal details outside the frame — how did people get to the hospital, where are the homes they return to, how are cremation workers processing the sheer number of pyres they must light?

One feature all these photos have in common is the haunted eyes above masks, expressing the range of emotions humanity is capable of feeling, from listlessness to devastation. Then there are the chilling ones, of endless queues of body bags waiting to be attended to. For many of us, this feels familiar — to be Indian is to be always in a crowd, jostling for space in our populous nation — albeit with a macabre, tragic twist.


But even as these photographs call the world’s attention to the apocalyptic situation in India, they have triggered a backlash, one that has highlighted Western media’s past failings in covering the subcontinent and its people, framing them as poor and backward. 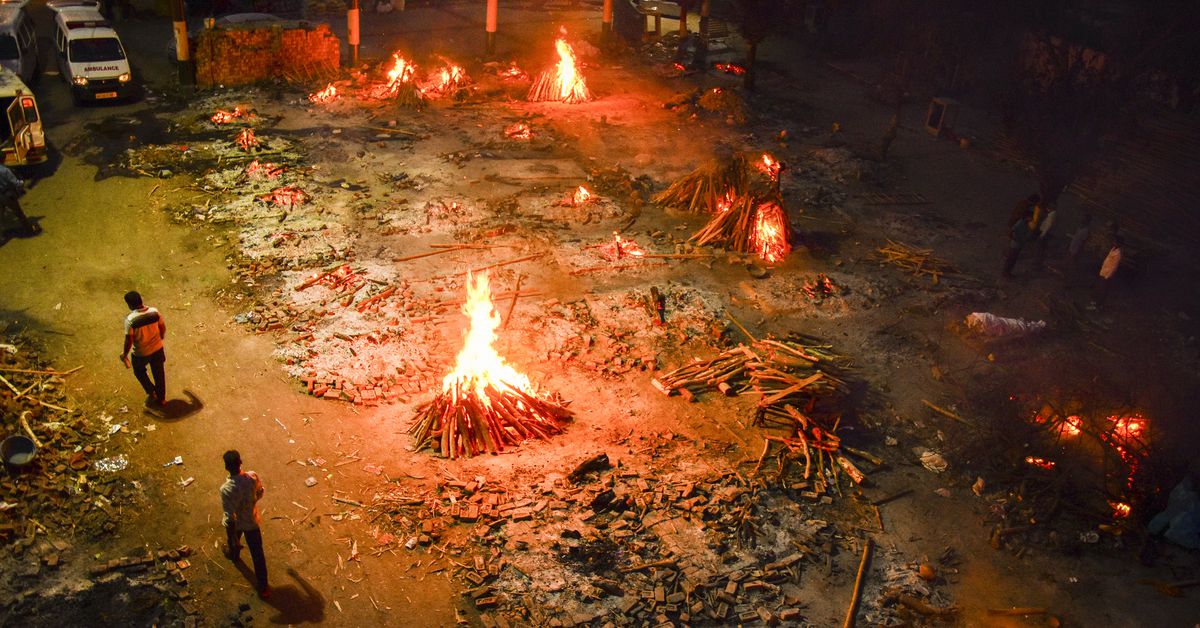 Gold Member
Photojournalists have been attacked for taking pictures of mass cremations and capitalizing on “Hindu suffering,” foreign correspondents were harassed for commenting on them, and some accounts claimed that they are proof of Western media’s “cultural insensitivity” toward Indian deaths. The thrust of much of the criticism is that by taking and distributing these images of mass funerals, the foreign press is exploiting the Indian people’s trauma and encroaching in particular on Hindu cremation rituals.

Certainly from the outside looking in, the visual evidence of the destruction wrought by Covid-19 is graphic and disquieting. Yet for many of us who are in India, close to the catastrophe, the images are stark encapsulations of our daily experience sourcing oxygen and beds for both people we love and anonymous strangers.

In the throes of firefighting, one is unaware of the extent of the horror. The photographs remedy that. The stricken eyes and body bags communicate a warning: It could be me, my relative, my friend, the neighborhood shopkeeper, the nameless lady I’d often see on my metro route. Everyone knows someone who has succumbed to the disease; sorrow is in the air, much like the virus.

Some of the criticisms are good-faith attempts to protect the dignity of the dead and their families and seek context alongside images of mass cremations. Media organizations are in the midst of a reckoning over the publication of images of death and trauma of Black and brown people, especially amid criticism of the circulation of images of police brutality against African American communities; dehumanizing images of migrants and their children; and visual coverage of war and violence in non-US countries. And both within India and in the wider diaspora, some have voiced concern that these images of mass funerals and mass grief “show India in a bad light.”

It’s important not to forget, for example, how the 2012 Delhi gang-rape case was framed in terms that suggested India was uniquely patriarchal and misogynistic, rather than one among many societies, including those in the West, where violence against women is normalized to varying degrees. There is thus in South Asia founded mistrust of European and American news media directing a patronizing and colonial gaze at our nation.

But in the case of India’s coronavirus epidemic, images from the crisis are a crucial safeguard against Prime Minister Narendra Modi’s pro-Hindu nationalist regime that seeks to hide these bodies, to hide the truth, lest its criminal neglect be exposed before the world. We have, in a short period of time, experienced periodic pogroms and other political forms of death. For many of us, these photographs bear a moral imperative to be taken and viewed.

Gold Member
India’s public health crisis has been fueled by the government’s mismanaged response, including ignoring scientists’ warnings of a new and more contagious Covid-19 variant, and allowing potential superspreader events such as religious festivals and election campaign rallies. Officials have gone as far as to try to discredit reports that Covid-19 cases spiked as a result.

Despite the scale of the tragedy unfolding within the country, wrote Arundhati Roy in the Guardian, Modi’s government seems mostly focused on image management, denying that the nation faces oxygen shortages, and overstating its success in quelling the virus.


Indians still do not know the full extent of the havoc wreaked by the virus because of what one expert calls a “massacre of data,” with hospitals, public officials, and even families believed to be undercounting and suppressing the number of cases and deaths. In January at the World Economic Forum at Davos, Modi boasted of launching the world’s largest vaccination program, aimed at inoculating 300 million Indians within months. As of mid-May, 140 million people have received at least one dose, but only 40 million are fully vaccinated.

The administration has also attempted to conceal the truth about its actions by falsely questioning the accuracy of the photos published in the international media and attempting to curtail journalists’ movements. In late April, the Indian government ordered Twitter, Facebook, and Instagram to take down posts critical of its handling of the pandemic. (They complied.)

It has encouraged the spread of dishonest rhetoric, which frames these images and their consumption as racialized voyeurism. On the contrary, the images coming out of India are part of its democratic citizenry’s desperate and hard-won attempt to reveal the scale of the state’s negligence, despite a press that has been suppressed by the Modi administration over its seven years in power.

Arguments on social media or in opinion pieces by pro-Modi messengers that images of Hindu cremations are culturally insensitive are not based on the truth. There is a long, uncontroversial history of media coverage of Hindu cremations: the funerals of public figures like Mohandas Gandhi and Jawaharlal Nehru were media spectacles covered in the global news media, and these pyres were photographed and filmed without protest. In most practices of caste Hinduism, there is no bar on viewing funerals (except for some problematic prohibitions against women and Dalits from accessing upper-caste crematoriums).

In fact, grief is not traditionally understood as a private emotion — until the mid-19th century, cremation sites or “shamshan ghats” were open and unpoliced. Characterizing these images as Hinduphobic or as having “mocked and exoticized” Hindu rituals is wrong; those concerned with the impression of Hinduism abroad might be better served helping to end the caste system, seen plainly in the fact that Hindu funerals involve labor by men from oppressed caste communities forced into front-line work without appropriate PPE kits.

Even if some might be advocating for the takedown of these images in good faith, others are advancing the regime’s cause by adopting the language of cultural sensitivity. Characterizing honest reportage as racism, xenophobia, and ignorance is a shrewd strategy of ideologues to shut down deserved critique of India’s current far-right government.

Given how rapidly and globally images are disseminated, these visual testimonies of India’s agony and its government’s shame are forcing the international community to pay attention in real time. If anything, the fact that the Modi government and its supporters want these images suppressed should be reason to seek them out.

Photographing and looking at images of the dead and those whom they leave behind is a complicated process with few ready answers. It must always be a careful and compassionate exercise, centering the wishes of those who’ve passed away and those who knew them best. The Indian journalists taking these photographs are deeply affected by this thankless task, and seeing the photos has been difficult for those of us for whom this nightmare is playing out in our backyards. However, viewing images of death in India is an act of empathy and solidarity during a worldwide disaster; some of us have it worse because we elected the wrong people.

I believe that in this case, the claim that these videos and photographs violate the dignity of the dead is neither morally tenable nor historically accurate. Rather, it is the safety of those still living that is at stake if the true scale of this state-enabled humanitarian crisis in India is not brought into the world’s view.

With input from Tanvi Misra.

Kamayani Sharma is a Delhi-based writer and researcher. She is a regular contributor to Artforum, Momus, the White Review and the Caravan, among others. She runs South Asia’s first independent visual culture podcast, ARTalaap.

To ensure safety in a globalised world, all must get the vaccine...

Highest Rail Bridge in the World

In a world mired in stubborn opinion, bigotry and callousness, it is important to reflect on ideals that can be an antidote.