Vijay Diwas: Remembering the heroes of the 1971 India-Pakistan war 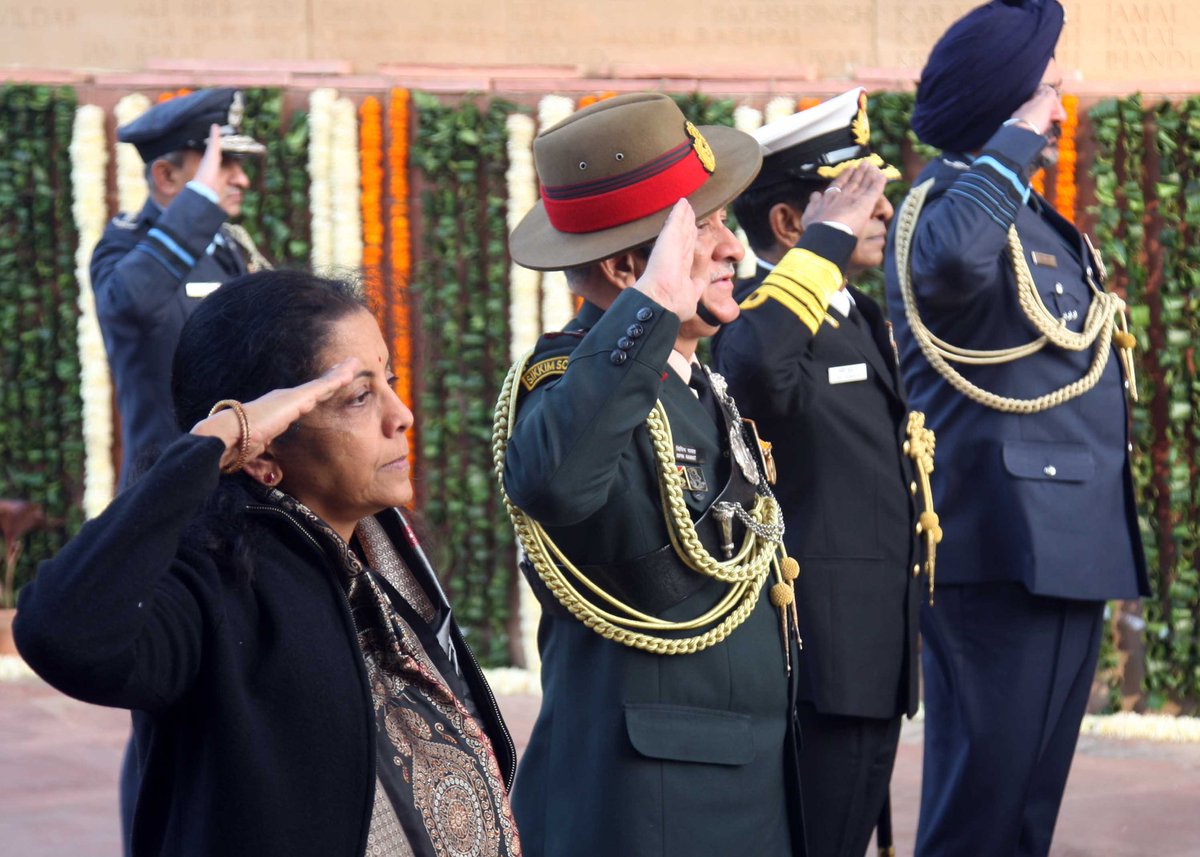 Bangladesh celebrates its independence day on December 16 and India hails the day as 'Vijay Diwas'.

On this day, 46 years ago, 93,000 members of Pakistani troops raised white flags and surrendered to the Indian Army and Mukti Bahini, calling an end to the Indo-Pak war of 1971

As per ritual, Defence Minister and the chiefs of the Indian Army, the Navy and the Air Force gathered at Delhi's India Gate to pay homage to the soldiers who lost their lives in 1971 Indo-Pak war, at Amar Jawan Jyoti today.

Prime Minister Narendra Modi today hailed the soldiers who fought the 1971 Indo-Pak war on the occasion of Vijay Diwas.

"On Vijay Diwas we salute the unflinching courage of all those who fought in 1971 and protected our nation diligently.

"Every Indian is proud of their heroism and service", the Prime Minister tweeted.

On this day in 1971, the war with Pakistan had ended and Bangladesh was created. Over 90,000 Pakistani soldiers had surrendered before the Indian Army. 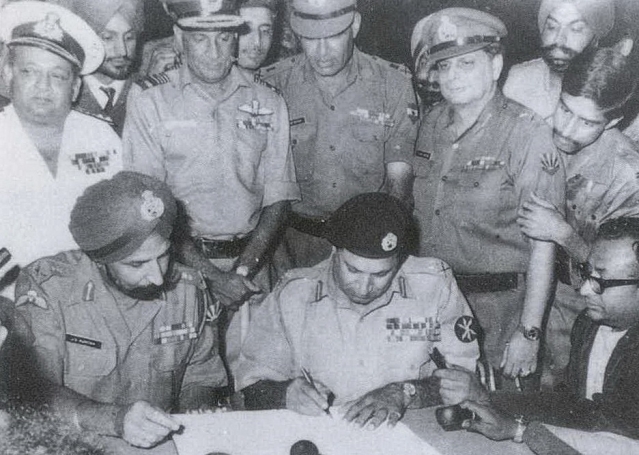 [h=5]Snapshot[/h]Forty-six years ago today, more than 3,500 warriors of the Indian Army crafted a victory that resulted in the capture of 93,000 Pakistani prisoners of war and delivered a new nation in 14 days.

But how many of the young Indians know that 16 December is marked as Vijay Diwas?

Ask new generation Indians, the predominant group in our nation, what Vijay Diwas is all about and you are more likely to get a blank response. For a few who know anything at all, a war was fought and won, Bangladesh was created and that is all. That over 3,500 warriors of the Indian Armed Forces made the ultimate sacrifice in the war that ended in India’s victory on 16 December 1971, that we captured 93,000 Pakistani prisoners of war (PoW) and delivered a new nation in 14 days of a two front conventional military engagement is hardly known to them.

The 1971 India-Pakistan war saw the execution of a well-considered strategy, evolved by the redoubtable Field Marshal Sam Manekshaw, even as he convinced then prime minister Indira Gandhi and her close cabinet colleagues and aides on the necessity of
going slow and not being tempted by the evolving situation in March 1971. The Field Marshal had the professional courage to parry demands and shun any talk of immediate war in early 1971 when the crisis in the then East Pakistan had brewed and spilled over beyond retrieval, triggering the first reactions in South Block.

We can ill-afford to forget the India-Pakistan War of 1971; it is just too important an event in India’s post-1947 history. Progressive nations move on and shape their destinies with hard work and initiatives but equally draw inspiration from the achievements of the past. We cannot allow our young not to be aware of our modern day history and therefore much more effort is needed to spread the word of India’s military heritage. Fortunately, there is deep interest in this, but not enough people to explain and render assistance to educational institutions in the field of military history and strategic culture. An odd lone ranger is doing it, but it needs to become a movement.

Happy Vijay Diwas to the nation!

[h=1]I pay my respects and salute you sir on this occasion, as you are an Ex-Service man who richly deserves… for your selfless and unparalleled service to the nation….and wish to share this news..[/h][h=1]Salute the soldiers, government orders toll plaza staff in the country[/h] 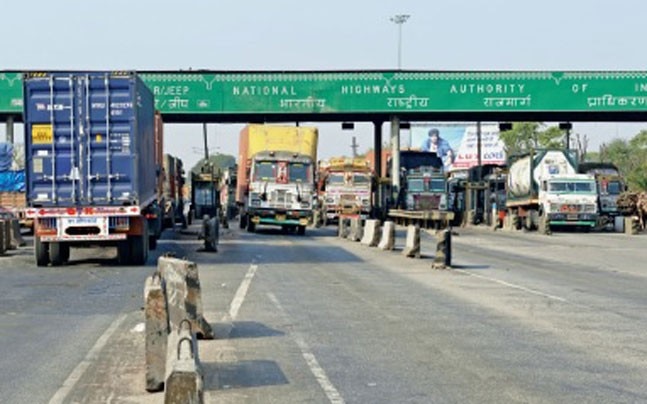 A policy circular issued by the ministry instructs toll plaza staff to salute the soldiers or give them standing ovation when they pass the toll plaza.

Defence personnel who complained of boorish behaviour by attendants at toll plazas across the country will now encounter a course correction. The soldiers will be given a salute or standing ovation at the road tax collection kiosks while on the move.

A policy circular issued by the National Highways Authority of India (NHAI) last week said the move is in view of the "unparalleled service" of defence personnel towards the country for which they deserve the highest regard and honour.

The circular came on the heels of complaints that soldiers were not only forced to pay toll charges but were also treated rudely by attendants. Personnel of the Army, Navy and Air Force have been exempted from paying at any toll plaza in the country.
However, members of the Territorial Army and NCC were entitled for exemption only when they were on duty. The defence forces had complained to the NHAI that despite explaining to the toll attendants that they were on official duty, they often used harsh language against the personnel and insisted on checking their identity cards.

Taking note of the complaints, the NHAI also ordered that only a competent authority or officer of the toll operating agency, and not the lower staff, can check the identity cards in case of any doubt. "Considering the unparalleled service of the armed forces towards the safety and security of the county, such kind of rude behaviour is not acceptable.

The armed forces personnel deserve the highest regards and should be given due respect at the toll plaza including salute and standing ovation as deemed fit," the circular issued by the highways authority said.

The NHAI has also directed toll operators to train their staff to pay due respect and salute the men in uniform for their "selfless dedication to the country".

"The verification of the identity cards of armed forces personnel should be done by some senior/competent authority and should not be left up to the untrained lowest staff," the circular reads.
……………..

The NHAI, while extending relief to the armed forces, has told the toll operators that in case of any doubt, the benefit must be given to the defence persons.
"Considering the extreme sacrifices of the defence forces towards the nation, in case of any doubt with respect to nature of their official duty, the benefit of doubt must appropriately be given to the armed personnel," it said.

thanks sir.....we remember our soldiers only on war times....we dont give much due respect for their service to nation...
OP
OP
V

Government failure and healthcare privatization at root of India’s COVID crisisApril 26, 2021 10:54 AM CDT BY VIJAY PRASHAD

Every Convict May Not Be Vijay Mallya, But Every Prisoner is Human

Vijay Mallya’s scalp or his assets? People are baying for his scalp