Two arrested in TN for spreading rumours about Jayalalithaa’s health

Two arrested in TN for spreading rumours about Jayalalithaa’s health 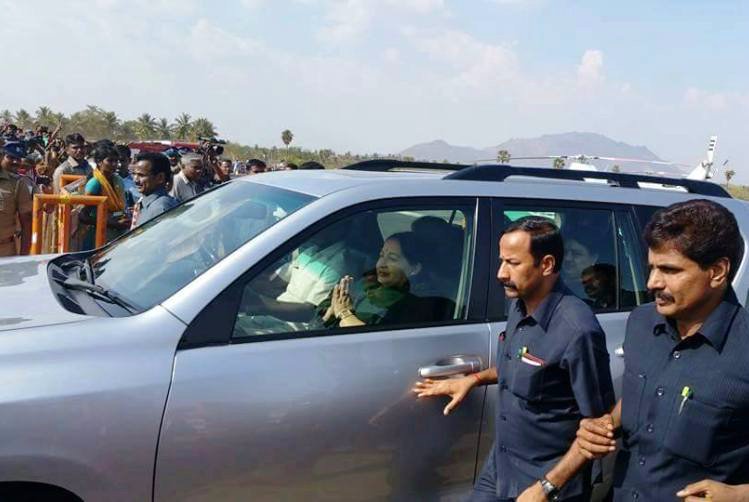 A case of spreading rumour with intent to cause riots has been registered.

A case of spreading rumour with intent to cause riots has been registered against them.
Satish Kumar, a software engineer, working at a private company was arrested by the police for creating and sharing a

In total, 43 cases have been registered against people for spreading rumours on social media. A press release states that the police is investigating the cases and the culprits will be punished.

The police also appealed to the public to not share any rumours about Jayalalithaa’s health on social media and warned that it could lead to an imprisonment of up to seven years.

I was shocked after seeing the video! These rascals to be punished as per the law! Spreading reckless rumors about Hon. CM was in bad taste!
OP
OP
V

How is the Government going to address this issue......?

It has been nearly three weeks since Tamil Nadu CM Jayalalithaa was admitted to Apollo Hospital for ‘fever and dehydration’, and this period has been, perhaps, among the toughest for the different pillars of our democracy in the state in recent years. We now know that her health problems are not as simple as they were initially made out to be, but that has only been a product of logical inferences and credible ‘leaks’ from a few in the establishment.

The track-record of the Jayalalithaa government in information transparency has always been piteous, and her stint at Apollo is the best illustration of that. There has been no clear communication to the people from the government. All official information on her health has come only through press releases from Apollo, which are cleverly worded and, barring one or two, have revealed very less. Even today, it is difficult to say with absolute certainty as to whether Jayalalithaa is capable of discharging her Constitutional duty.

On The News Minute, writers have repeatedly held, as you can read here and here, that it is well within our right to know if she capable of being the CM, and that there must be more transparency in the government.

But nothing, not even the AIADMK and TN Government’s absolute secrecy rooted in their sycophantic devotion to her, is any justification for the absolute irresponsibility with which large sections of the public and some sections of the media have peddled rumours.

Over the weeks, in the digital rumour-lands of the state, she has been repeatedly declared dead or brain dead, and later brought back to life, a‘special machine’ worth Rs. 5cr has been bought to save her, or was even taken abroad for treatment through the back gate of the hospital.

Worse, here are some things people have cooked up on the internet:

And this is just the shortlist.

While there is no doubt that the rumour-mongering has been exacerbated by official silence, what justifies malicious propaganda and fraud?

On Monday, the TN police arrested two persons for such mischief, and both of them have been accused of uploading fake audio clips and spreading false information in the digital space.

Their specific involvement could be questioned based on facts, these ‘rumours’ cannot be dismissed as just products of the establishment’s non-transparency.

We are living in the Age of WhatsApp, and our proclivity to spread misinformation, be it with specific motives or just for fun, is perhaps at an all-time high.

It isn’t just Jayalalithaa’s health which has fed rumour mills. After the Uri attacks, there were several rumours spread on ‘revenge attacks’.

During the Chennai floods last year, malicious text messages and pictures were circulated, and as journalists, much of our time and effort was wasted in just busting them.

As a people, and as journalists, we have to understand our duties as responsible citizens. When subject to non-transparency, our response cannot and should not be rumour-mongering, but asking for more information. Had there been enough public and media pressure to get more clarity on Jayalalithaa’s health, it would have been fruitful. But to dismiss the rumour epidemic as a result of scarce information would be absolving ourselves of our own responsibility. It’s true that the TN government cracks down on criticism coming through official channels, but that doesn’t make justify rumour-mongering by any stretch of imagination.

This also used to happen in Soviet Russia during each transition. Outsiders could only guess that something was happening in the Kremlin.

More than 2,000 men arrested in crackdown on child marriages in India

‘What kind of Hindus are you?’ Mob asks arrested Assam lecturer’s family on not having idols at home