LAS VEGAS — Toyota made it clear today at the big Consumer Electronics Show that its fuel-cell technology is the future of automotive transportation.


The car-maker on Monday held a press conference detailing the progress of the new Toyota Mirai, a hydrogen fuel cell vehicle that is powered by combining oxygen and hydrogen and will be commercially available later this year.


“We believe that hydrogen electric will be the primary fuel for the next 100 years,” said Bob Carter, a senior VP with Toyota’s US office. 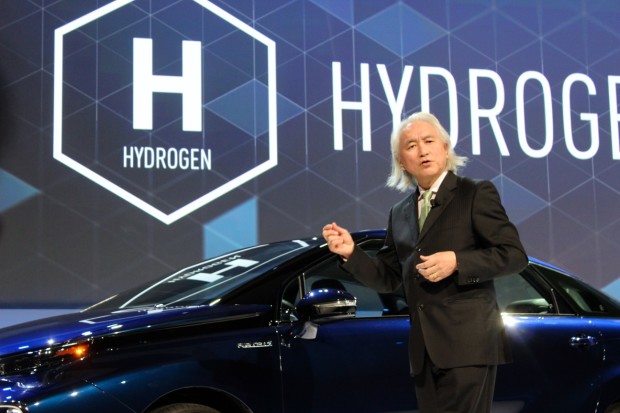 Dr. Michio Kaku talks about Toyota’s fuel cell technology. Perhaps the most newsworthy announcement came when Toyota said it would make all of its 5,680 patents related to fuel cell technology available, royalty-free, to other companies manufacturing and selling both fuel-cell vehicles and hydrogen refueling stations. The idea is to drive more innovation in this somewhat nascent sector of the automobile industry.


“It’s obvious that there can be a higher societal value in openly sharing our IP,” Carter said. “By eliminating the traditional corporate boundaries, we can speed the metabolism of everyone’s research and move into a future of mobility quicker, more effectively, and more economically. Indeed, I believe that today marks a turning point in automotive history.”


Toyota did something similar when it was developing the technology for its popular hybrid cars, but this marks the first time it has made its patents available free of charge. Tesla also gave away its patents last year.


“Hopefully by sharing these patents with others, the new fuel cell components and systems can be refined and improved to increase our performance, reduce our costs, and attract a broader market of buyers,” Carter said. 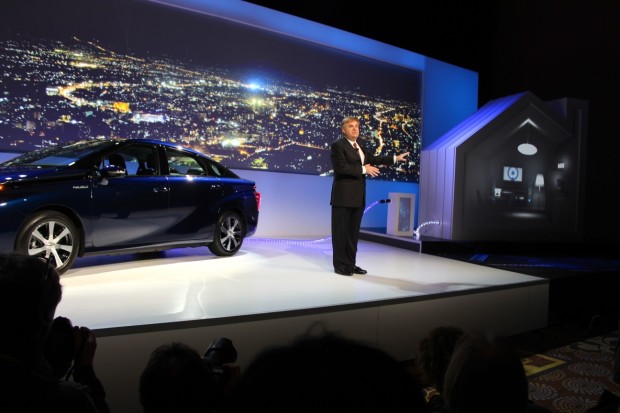 Bob Carter shows how the Mirai can provide electricity for a home. The company today opened with remarks from Dr. Michio Kaku, a theoretical physicist and best-selling author. Kaku noted his initial skepticism for Toyota’s plans for hydrogen fuel cell cars, but explained why he’s convinced that this is a “game-changer.”


“The hydrogen car will change the landscape not just of our lives, but perhaps the world of politics, the world of energy — energy is at the very basis of all of modern society,” Kaku said. “We are present at the creation of a hydrogen society, a non-polluting society that will perhaps one day vanquish global warming and the problems associated with the burning of hydrocarbon fuels.


The Mirai, which will be first sold in California later this year for $57,500 MSRP and then in the New England area, generates electricity by combining oxygen and hydrogen molecules — the only emission is water “so refined you could practically drink it,” Kaku noted. The car has a range of 300 miles and goes from 0-to-60 MPH in nine seconds. Unlike electric batteries, hydrogen tanks can be refilled in three-to-five minutes.

Carter also demonstrated how the Mirai can provide power to your house for up to a week in the event of emergencies, as we reported last year at Toyota’s CES press conference.

View: India needs to choose the economy it wants - Toyota or pakora?