Harvard and Stanford may jump to mind when it comes to tech titans. Microsoft's Bill Gates and Facebook's Mark Zuckerberg chose the former, and Google's Larry Page and Sergey Brin flocked to the latter. But for the next generation of entrepreneur, we may need to look outside the Ivy League. (Steve Jobs, of course, attended Reed College, a liberal arts school in Portland, but didn't graduate.)
Innovation and creativity aren't exclusive to the most prestigious centers of education. They exist in schools all around the world with cutting-edge programs in science and tech, even if they fly further under the radar than "that college in Boston."
To build our list, we considered a variety of criteria, including ranking, research facilities, important technological discoveries, notable faculty and alumni, cost and relationships with the private sector. We drew our stats primarily from U.S. News & World Report and Times Higher Education rankings, as well as slightly lesser-known lists like this one from Great Value Colleges.
Scroll through the most promising of these schools below. Is yours one of them?
1. University of Texas at Austin 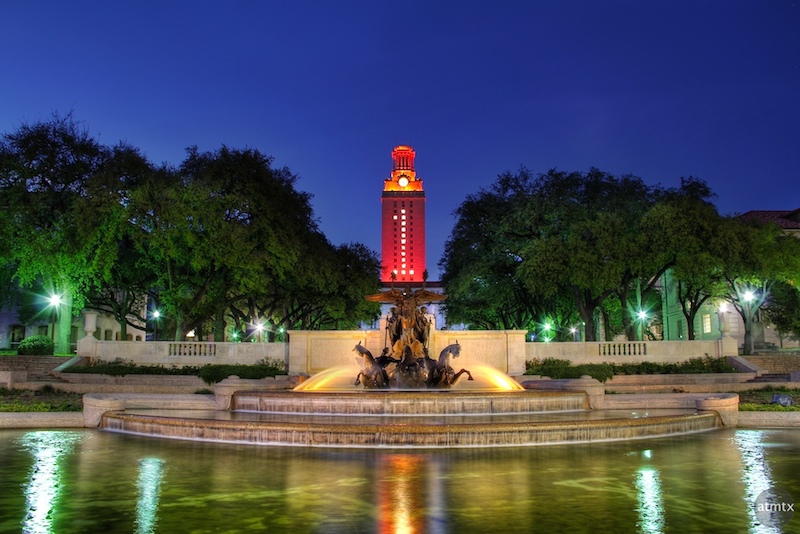 Source: atmtx/Flickr The University of Texas at Austin has a lot of things going for it: its proximity to Austin, itself the home of a bustling startup scene; its connection to South by Southwest, a big-name technology and ideas conference; one of the country's top engineering programs; and a number of notable alumni, including Neil deGrasse Tyson and Dell founder and CEO Michael Dell (though Dell never finished, dropping out in 1984 to sell computers).
2. University of Toronto

University of Toronto's beekeeping program.Source: Melissa Renwick/Getty Images The University of Toronto is home to Geoffrey Hinton, a distinguished emeritus professor of computer science who, as the Toronto Star put it, is the "godfather of a type of artificial intelligence currently shattering every ceiling in machine learning." He also works part-time at Google, which recently spent $400 million on the purchase of an artificial intelligence company, as a "distinguished researcher."
3. Rochester Institute of Technology


U.S. News and World Report ranked RIT eighth on its 2015 list of Best Regional Universities (North), and it also offers a plethora of interesting programs, including video game design and imaging science majors. RIT is also well-known for its career-oriented approach to learning: Its large co-op program partners with over 1,900 employers worldwide to give students real-world work experience before they're actually out there in it.
4. Georgia Institute of Technology

"A member of the Swiss Federal Institute of Technology Zurich robotics team shows the field that the team's entry in the Nano Cup robotics competition ... at Georgia Tech in Atlanta."Source: John Bazemore/AP With one of the best engineering programs in the country, including top 10 spots in every engineering category according to U.S. News & World Report, Georgia Tech is renowned as a top destination for tech whizzes. But it's also home to the Georgia Institute of Technology Cooperative Division and the Graduate Cooperative Education Program, two large influential programs that place students in real-world working environments.
5. Delft University of Technology

Located in Delft, Netherlands, the city's namesake university is the biggest and oldest university of technology in the country. It's also the incubator for a number of rad projects, like Denise, a robot with the ability to walk like a human, and Nuna, a solar-powered race car that won the World Solar Challenge four times in a row in the 2000s.
6. Imperial College London

Prince Harry has a grand time at Imperial College London's Center for Blast Injury Studies.Source: WPA Pool/Getty Images U.S. World News & Report placed Imperial College London twelfth on its list of top global universities, and the Times Higher Education World University Rankings ranked it sixth in the world for engineering and technology, alongside titans like Stanford University, Massachusetts Institute of Technology and Princeton University. Meanwhile, according to the New York Times, recruiters from high-ranking companies in 20 countries put it ninth on its graduate employability list.
Even Prince Harry is a fan: He helped open its Center for Blast Injury Studies, a cutting edge program that studies combat-related injuries.
7. Worcester Polytechnic Institute

"Worcester Polytechnic Institute students from left, Brian Morin, Paul Greene and Geoffrey Elliott pose with a laptop computer, which is logged onto the Microsoft homepage showing the company's Internet browser Tuesday afternoon, March 4, 1997, in Watertown, Mass. Greene uncovered a major security flaw in Microsoft's browser and along with Morin and Elliott posted the discovery on a public Internet bulletin board after being ignored for several days upon reporting the bug to Microsoft. The flaw could allow a Web site operator to secretly run programs or destroy files on someone else's personal computer."Source: STEPHAN SAVOIA/AP Counting among its alumni Robert H. Goddard, the creator of the first rocket powered by liquid fuel, Paul Allaire, the former CEO and chairman of Xerox, and Gilbert Vernam, an early pioneer of cryptography, WPI in Massachusetts is also known for its propensity to churn out cash-friendly graduates — Bloomberg Businessweek named it one of its top 20 schools for return on investment in 2012.
8. Technion-Israel Institute of Technology

Google CEO Larry Page, Cornell University President David Skorton, Technion professor Craig Gotsman and former New York City mayor Michael Bloomberg hold a press conference to answer questions about Cornell and Technion's tech campus, which temporarily resided in Google's New York City headquarters.Source: Seth Wenig/AP Israel is home to one of the best and brightest startup scenes on the planet, and its top university is just as formidable. Bloomberg Businessweek included it — the only non-U.S. entry — on a list of "Top 10 Colleges for Tech CEOs," and in 2012, it partnered with Cornell University to build a new engineering and applied science school on New York City's Roosevelt Island.
9. Montana State University

A street sign at the Montana State Innovation CampusSource: Christian Science Monitor/Getty Images In 2012, the school's Advanced Technology Park got a makeover, including a new name — the Montana State University Innovation Campus — and a new director, Teresa McKnight, who envisions it as a go-between for research and the private sector. In 2015, it has a variety of fields to its name — optics, biotechnology, agriculture, information technology — as well as number of projects, like the Center for Bio-inspired Nanomaterials and the Thermal Biology Institute.
10. University of California, Berkeley

Siemens Senior Vice President Terry Heath examines an offering at an entrepreneurship conference held at UC Berkeley.Source: Jed Jacobsohn/AP Network World reported in 2012 that UC Berkeley was a friendly home indeed for people who want to be the heads of massive tech conglomerates: "Among the 81 degrees obtained by top tech CEOs, Berkeley represents five of them," beating out Stanford, the site said. Despite its reputation as a hippie wonderland, it also has some pretty badass tech ventures to its name. (Oh, and it's also home to 51 Nobel Laureates, 22 of whom are or were faculty.)
11. University of Melbourne

Former Australian Prime Minister Kevin Rudd examines a prototype for a bionic eye at the the University of Melbourne.Source: WILLIAM WEST/Getty Images In the 1960s, Graeme Clark, a researcher at the school's Center for Neural Engineering, began to study the field of cochlear implants. In the 1970s, he and his colleagues developed the world's first bionic ear — a device that would later be implanted in more than 300,000 patients with hearing problems. Clark isn't done yet, however, despite being your grandfather's age: In an interview with the Sydney Morning Herald in July, he described excitement over his new projects, which "could help with treatment of paraplegics, epileptics and ... the bionic eye implant."
12. Harvey Mudd College

"Mellon Mays Undergraduate Fellow Cesar Orellana '17 describes electro-spinning during summer research open house."Source: Harvey Mudd College/Twitter It may be the most expensive college in America, but the California institution also recently came out on top in the undergraduate engineering game: U.S. News & World Report awarded it first place on its 2015 list. It's also making strides to improve diversity within STEM fields, despite a few missteps along the way.
13. National University of Singapore

"The #604 NUS Urban Concept, Hydrogen UrbanConcept, from NUS, turns a lap on day four of the Shell Eco-marathon Challenge Asia at Sepang International Circuit in Kuala Lumpur."Source: Peter Lim/AP NUS houses the Centre for Quantum Technology, a research institution founded in 2007 as Singapore's first Research Center of Excellence. Focused on the application of quantum theory to "classical" fields like computation, information and cryptography, the center is working on quantum batteries and theories of query complexity and quantum entanglement. Though it's run somewhat independently from NUS, CQT also offers plenty of connections for students — an ample opportunity for technological discovery.

S
Pls tel next tithi date in june or july

One Nation One Ration Card: Manna for migrant workers -- by next March

S
When is the next best Thithi to perform the missed Thevasam ??

Nov 24, 2017
sumathigokul
S
R
Spearphishing is the internet scam you've never heard of, and you could be its next v