[h=1]Swamy urges PM to stay all operations of GSTN and remove private shareholders[/h] GSTN expenses are ballooning and unwarranted and its activity should be stopped forthwith, urges Swamy
By Team PGurus -
September 22, 2016 GSTN expenses are ballooning and unwarranted and its activity should be stopped forthwith, urges Swamy
Highlighting the illegalities of UPA Government formed Goods and Services Tax Network (GSTN), BJP leader Subramanian Swamy on Wednesday urged the Prime Minister (PM) Narendra Modi to stay all operations of private companies controlled GSTN, the IT backbone of GST. Urging to convert GSTN into a fully controlled government body under Central Board of Exercise and Customs (CBEC), Swamy said “the continuation of the present system will lead to set aside by Supreme Court on a PIL, as it is unconstitutional and not being in the public interest.”

Arguing that the Department of Electronics and the CBEC are fully capable of handling GST data, he said that “in effect, GSTN (with the current shareholding) is foreign controlled” and hence, needs to be restructured in the national interest. Swamy pointed out that among the 51 percent shareholders, ICICI Bank, HDFC and LIC Housing Finance are controlled by several foreign companies.

“I am happy to learn from the media that you have taken a review meeting of finance ministry officials on the question of GST/ GSTN implementation. As you may now be aware, GSTN, which is a data processing and tax revenue collecting Private Limited company, was never security cleared by the home ministry, whose clearance is mandatory,” Swamy said.

“I strongly urge you therefore to direct the complete stay of all operations of the presently constituted GSTN, and that it remains non-operational till it is restructured according to our national interest and after security certification by the home ministry,” the letter said. The full letter with the objections raised by the Department of Expenditure is published at the end of this article.

The central government holds 24.5 per cent stake in GSTN while state governments together hold another 24.5 per cent. The balance 51 per cent equity is with non-government financial institutions like HDFC Bank, HDFC Ltd, ICICI Bank, NSE Strategic Investment Corporation and LIC Housing Finance.

Swamy said ICICI and HDFC shareholding is near about 65-80 per cent owned by foreigners and “in effect GSTN is foreign controlled and hence, needs to be restructured”.

The Economist turned politician, pointed out that the tax related matters should be fully under government and the presence of major private shares in GSTN will lead to leakage of tax data and rigging of stock exchanges. Doubting the role of 10 percent shareholding of a subsidiary company of National Stock Exchange (NSE) in GSTN, Swamy’s said that this ensures the presence of Chidambaram’s friendly stock market operators.

“That is why the decision to create a subsidiary of the NSE headed by Ravi Narayan, a corrupt crony of Chidambaram, and permit this subsidiary to hold 10% shares of GSTN. This is tantamount to legitimising the offence of insider trading,” accused Swamy.

Swamy said that the Comptroller and Auditor General (CAG) has no power to look into financial transactions of GSTN, which will run into huge amounts once GST is implemented. “Hence, there is reckless disregard for the use of public funds to benefit the private shareholders and employees,” he wrote to the Prime Minister. He also questioned annual salary of Rs. 1 crore ($150,000) and other perks to the CEO of GSTN.

“The Indian Revenue Service Association has unanimously resolved that GSTN is a facility which can be duplicated by the experience of the finance ministry’s data processing of income tax receipts and with much greater experience and efficiency by CBEC,” he said. Swamy further said the computer programming that is supposedly done by GSTN has now been outsourced to Infosys at a huge payment of Rs 600 crores ($90 million), of which almost Rs 400 crores ($60 million) have already been paid. He said that soon after this contract was given, former Minister of State Finance, Jayant Sinha’s wife became a Director of Infosys.
Below is a copy of the letter and the annexure by the Department of Expenditure, pointedly suggesting that the Government departments are fully equipped to write code for the GSTN. 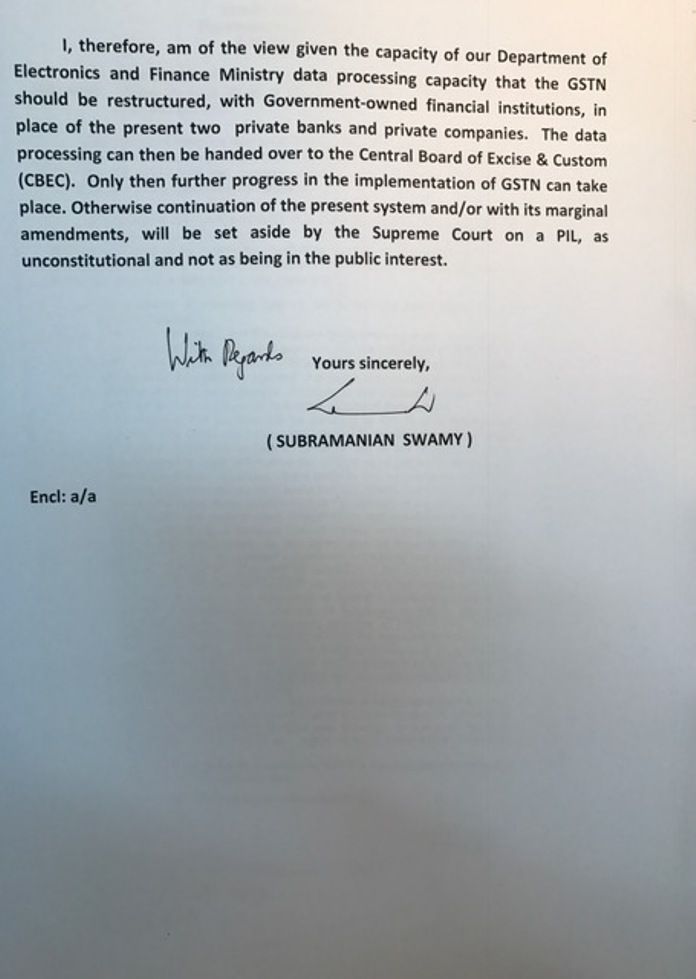 GST Network is an important component & one government is 100% dependent on its success... Its State (means Central Government/ State Governments/ Union Territories - all included) revenue !! GSTN is registered as a Section 25 company under Companies Act (which is blatently wrong - this should be an AUTHORITY). Development of network/ technology required for GSTN to function should wrest with Government & not with "individuals" or "companies formed for profits". Here its made as a section 25 company and a good share is given to two private banks (HDFC & ICICI). Both these banks r 70% plus owned by foreign entities and these two are pure foreign banks/ foreign entities. This GSTN will have access to thousands of companies internal data, revenue, debts etc... available in the network (where two foreign companies end up having complete access). Second stage will be rigging markets, HDFC or ICICI may want to dilute their shareholding etc. etc... Secondly, this GSTN has entered into a big ticket contract with INFOSYS - again one of the most dubious company. Infosys is formed only for the purposes of profits & that's perfectly okay. But Infosys business is only "FOREIGN CONTRACTS" on per day per person dollar contract !!!! Its a pure body shopping company & they don't have the means & specialisation to develop a network like this - hence most part of the contract which they bagged from Government is getting sub-contracted to unknown entities worldwide... Its a dangerous scene out there with GSTN...