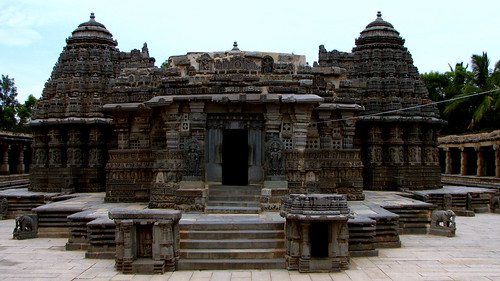 The Chennakesava Temple (Kannada: ಶ್ರೀ ಚೆನ್ನಕೇಶವ ದೇವಸ್ಥಾನ) (also spelt Chennakeshava) located at Somanathapura is one of the finest examples of Hoysala architecture. The temple was built by Soma, a Dandanayaka (lit, "commander") in 1268 C.E. under Hoysala king Narasimha III, when the Hoysala Empire was the major power in South India.

The Lord AdiKesavaSwamy means 'Foremost Friend'. Legend says that Lord AdiKesavaSwamy defeated the demon Kesi. The demon's wife prayed to the River Ganges and to River Thamirabarani and created a destruction. But it was in vain and she surrendered to the Lord. Thus, the formation of the rivers made in a circle came to be known as Thiruvattaru.


The Somanathapuram Temple, earlier known as Vidyanidhi Prasanna Somanathpura, is situated on the left banks of Cauvery River about 35 km from Mysore. This star-shaped Hoysala temple-style structure with triple towers, built in the 12th century, is devoted to Lord Keshava and is often known as the Keshava Temple.


Originally constructed by Somanatha, a minister of Veera Narasimha Devarasa, a Hoysala king, the temple has two more shrines devoted to Lord Venugopala and Lord Janardhana. The outer walls of the temple that has been well maintained by Archaeological Survey of India (ASI) are intricately carved with images of various deities, mythological birds and beasts, caparisoned elephants and charging horsemen.


The last and the best-preserved of the Hoysala temples, this temple has an east-facing entrance with lathe-turned columns. The main hall is adorned with elegant pillars and ceiling panels with names of sculptors inscribed on their works, a common practice during those days. This temple is equally beautiful as the world-renowned Halebid and Belur temples and is worth visiting as its sculptural beauty will certainly leave you spellbound. Before planning your tour, look for special packages offered by various travel websites on Mysore hotels. On these websites, you will find a list of premium to budget hotels in Mysore, and you need to choose the one that suits your preference, travel schedule and pocket. So, make a booking and visit this glorious city to witness its grandeur.

Getting there:
From Bangalore, going along the Bangalore Mysore highway, take the scenic country road from Mandya via Bannur. It should take about an hour depending on Bangalore city traffic conditions.

Karnataka, andhra, tamilnadu belt has numerous temples worth visiting and worshipping. Thanks for the informative posts.