South Korean women will soon outlive us all. What's their secret?

[h=1]South Korean women will soon outlive us all. What's their secret?[/h]

Low blood pressure, low body mass, or is there something in the kimchi?
Image: REUTERS/Kim Hong-Ji

Women born in South Korea in 2030 are projected to be the first in the world to have an average life expectancy of above 90, a new study has found.

And six other countries are not very far behind. France, Japan, Australia, Canada, Chile and the UK are all likely to see women’s average life expectancy at birth pass 85 by 2030, according to the research by Imperial College London and the World Health Organization, which looked at future life expectancy in 35 industrialized countries. 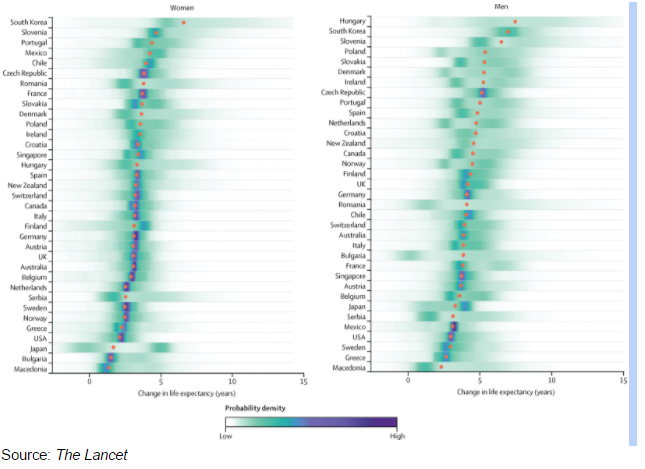 The study, published in The Lancet medical journal, predicted that life spans would continue to increase significantly in most of the countries studied.

In the United States, however, life expectancy is set to rise more slowly. This is due to a combination of factors including obesity, high maternal and infant mortality rates, unequal access to healthcare and relatively high homicide rates.

By 2030 lifespans at birth for American men will be comparable to those of Czech men (under 80) and American women will have life expectancy similar to those in Croatia and Mexico (under 85).

A lot of it is to do with how tall people are. The US is the first wealthy country to experience stagnation or even a possible decline in average adult height – a factor that correlates closely with health and longevity.

Kimchi is the new superfood

The study, which uses 21 different models to forecast life expectancy, gives South Korean women born in 2030 a 57% chance of exceeding the age of 90, and a 97% probability they will live to be over 86.

The researchers say South Koreans’ expected longevity is based on the assumption that they will have lower average-body-mass indexes (BMIs) and blood pressure than citizens of other comparable countries.

Their long lifespans could also be down to the South Korean diet, other experts suggest; most notably kimchi, a dish based on fermented vegetables – usually cabbage – which is high in probiotics and vitamins A and B. 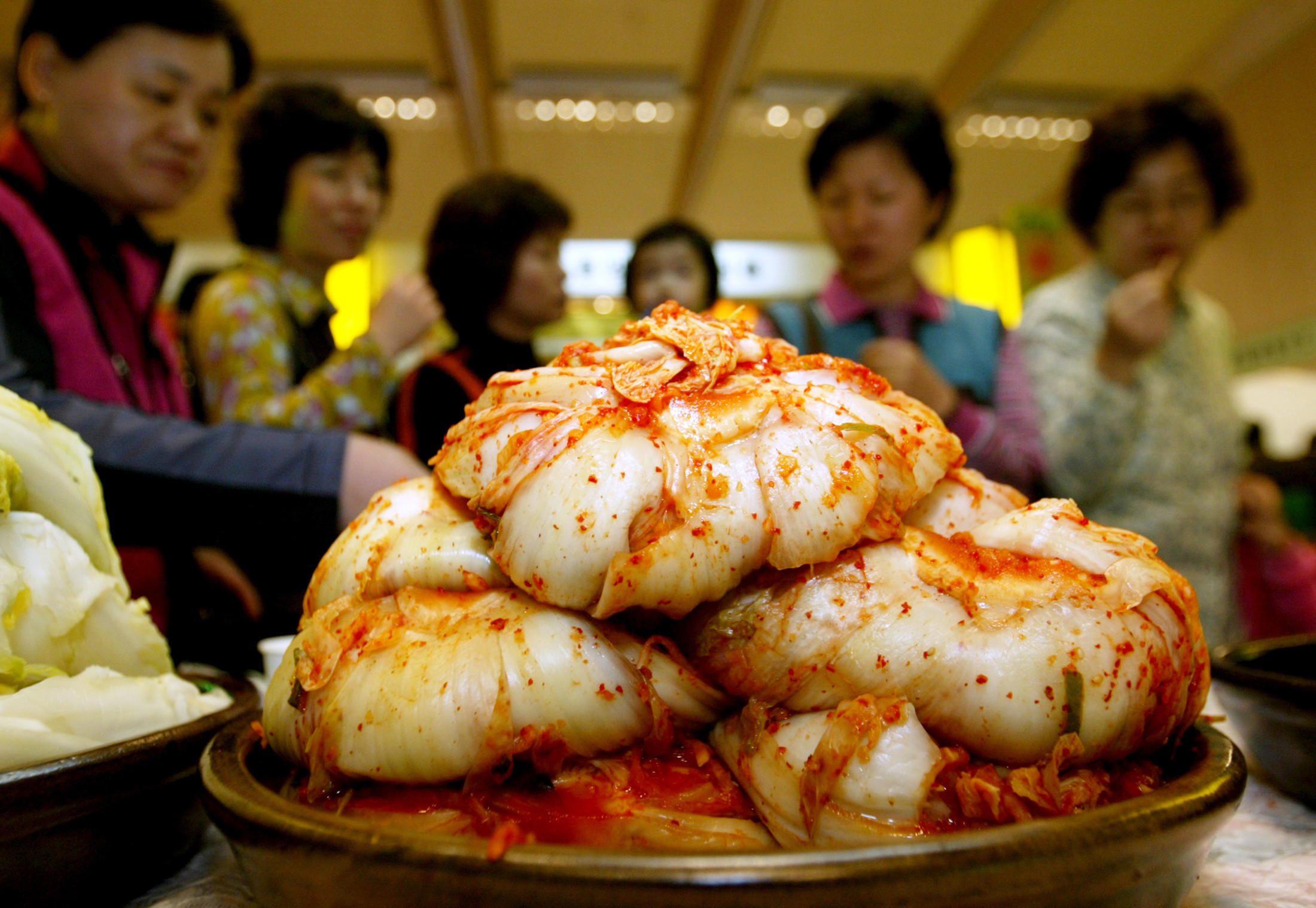 Kimchi made from cabbages
Image: REUTERS/Kim Kyung-Hoon
Other factors driving rising life expectancies in the countries at the top of the league table include improved nutritional education, advances in economic and social status, lower road-traffic accident rates and high-quality healthcare systems, which improve prevention and survival rates from serious diseases and reduce infant mortality.

Men are catching up

The gap between the average lifespans of men and women is beginning to close in most of the countries studied. Although men continue to have greater lifestyle risk factors, such as smoking and cardiovascular disease, women’s lifestyles are becoming more like men’s and their life expectancy advantage is likely to shrink in every country by 2030. 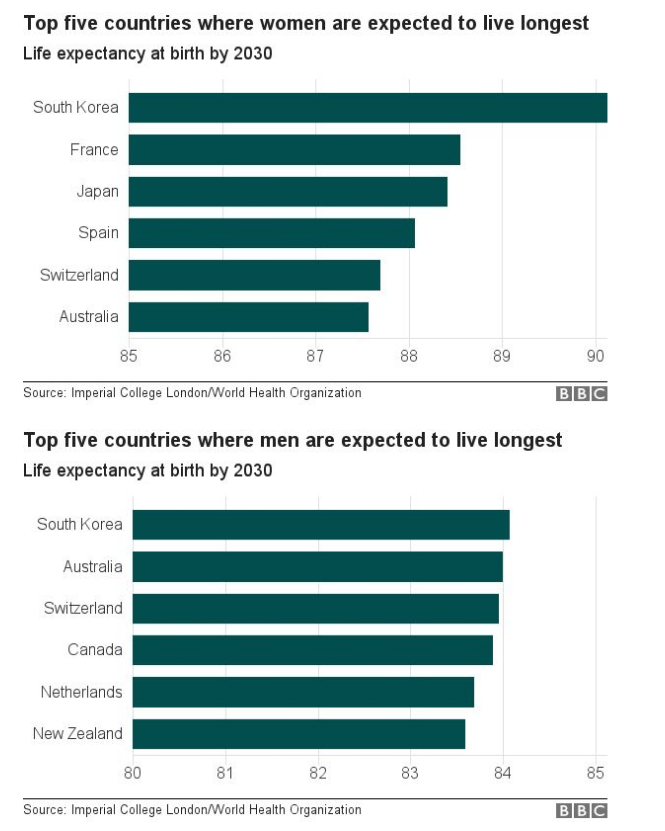 How to make kimchi in 5 easy steps

No need to steal a Korean family's secret recipe for kimchi! We've got you covered.

This spicy dish is the equivalent of Korean soul food. (Photo: Foodio/Shutterstock)


One of the ironies of my grad school experience involved teaching Korean housemates, who possessed zero cooking skills, how to cook rice — with a rice maker no less. As an outsider to Korean culture, I quickly realized two things: that women do most of the cooking and that there are two food items no Korean household can live without, steamed white rice and kimchi. Rice was cheap and easy to prepare and was eaten out of necessity; on the other hand, kimchi was treated with near reverence.
The pungent, highly seasoned fermented cabbage is the Korean equivalent of soul food, reminiscent of the taste of home and a source of family pride. This is the sort of well-guarded secret passed down from mother to daughter with marriage prospects riding on the outcome — meaning not the kind of information Korean moms readily imparted to curious onlookers who were passing through the kitchen on their way to the den.

The Internet has changed all of that cooking-wise. Now you don't have to be female or born into a Korean family to crack the kimchi code. Instructions and guides abound on how to make the pungent dish. If you like spicy, intensely flavored food, then kimchi is for you. Think of it as 5-alarm sauerkraut. This is a vegetarian variation on traditional kimchi that substitutes nori, a saltwater vegetable used to wrap sushi in lieu of fish sauce.
Prep time: 35 minutes
Total time: 48 hours to ferment
Yields: 5 cups
Kimchi Equipment you'll need

Notes on ingredients * The amount of water used is dependent on the size of your mixing bowl. A bigger bowl requires more water.
* Korean red pepper flakes, called gochugaru, are found in Asian markets or can be purchased online.
* Many kimchi recipes call for fish sauce, which adds a savory dimension to kimchi known as umami. Dulse or nori, saltwater vegetables made from kelp and seaweed respectively are good substitutes.
Cooking directions


Kimchi can be eaten as a tasty side dish or added to soup for some extra zest. (Photo: Enrique Gili)

Gold Member
I do not mind living less number of years, than eating that foul smelling food. In the USA Kimchi is generally NV. LOL