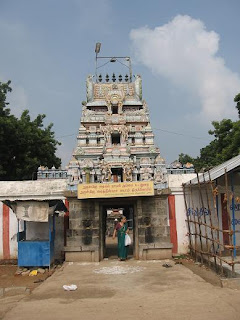 The temple has the tower and a tank inside the complex. The main deity of the temple is Vaidheeswarar in the form of big Shiv Linga facing east direction. Near the main sanctum, the goddess Thaiyal Nayaki is available in a separate shrine which is facing the southern direction. The main entrance of the temple below the tower has some beautiful wall carvings. Opposite to the main shrine, the flag staff and Nandi idol are located. Nandi is named as Vishnu Nandi in this temple. The Sthala vruksha (the sacred tree of the site) for this temple is Thaazhi Panai Maram (Palm tree).


The 1000 years old temple of Vaidheeswaran has a lot of architecturally beautiful sculptures inside the inner corridor. The entrance to the main shrine has the idols of Ganesha and Muruga, the two sons of Lord Shiva, on either sides. The main shrine has the sanctum of Vaidheeswaran and Thaiyal Nayaki, and also the other shrines and idols. The entrance of the main sanctum of Vaidheeswaran has the idol of Alagu Vinayak (Ganesha) on one side and Sevvai Padham (the foot prints of Angarak) on the other side. I am not sure if Angarak foot prints is present in any other temple. This is a rare symbol to find. Please note that this is believed that Angarak worshiped Lord Shiva in this temple.

The inner corridor has the idols of Surya (sun), Veeran, Vinayak, Vishwanath with Vishalakshi, Kumbeswar, Kailasanathar, Annapoorni, Mahalingeswarar, Adi Shankar, and Maha Lakshmi. Another highlight of the temple is that it has Subramanya Chakra, Sri Chakra, and Shiva Chakra installed by the great saint Adi Shankaracharya. The inner corridor also has the shrines of Nataraj with Sivakami, Somaskanda, and Muruga with his consorts Vallid and Devasena. Navagraha, Bhairav, Nalvar, and Chandran are also present in the inner corridor of the temple. The walls surrounding the shrines has the idols of Nardana Vinayak, Dakshinamurthy, Vishnu, Brahma, Durga, and Chandikeswarar. The big corridor doesn't have any idol except for one big Shiv Linga. 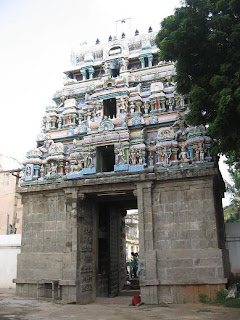 ​
Another highlight of the temple is that on the 21st, 22nd, 23rd, 24th and 25th of Maasi month of Tamil calendar, Sun rays directly fall on the main deity around 6 am in the mornings.