Thennangur is located near Vandavasi, 6kms before Vandavasi in the Kanchipuram – Vandavasi route. It can also be reached via Chenglepat and Uthiramerur. 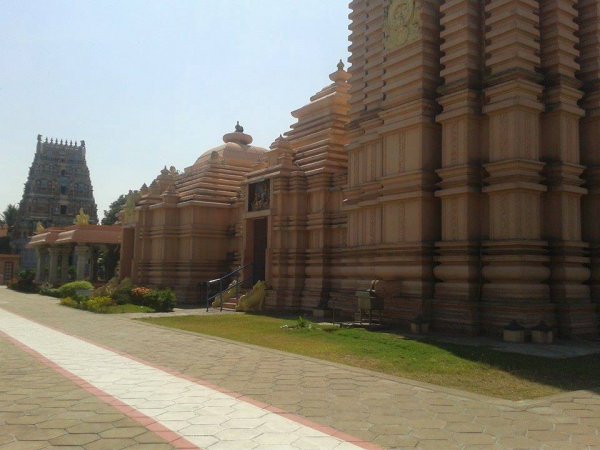 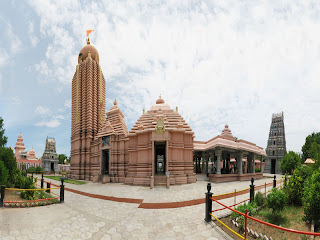 Resembling the design of Puri Jagannath, this temple stands majestically with a 120 feet tall tower and Gold Kalasas of 9.5 feet with Sudarsana Chakra above. The saffron flag flying above the tower invites the devotees with blessings of the Lord. It is not simply wonderful but thrilling to see a tower of this stature facing east. Passing the Balipeeta, there is the 16 pillared Maha Mandap. Entering the Mahamandap, one feels that he/she had entered the gates of Paradise. Baghwan Garuda is occupying the centre space as a Gem. Lord Govindaraja Perumal enjoys and graces the Wedding festival in the mandap as in Tirupathi except on Saturdays. Made of Salagrama stone, Lord Panduranga in this idol form is 12 feet tall in a standing form. Mother Raghumayee nearby is adding beauty to beauty. Lord Panduranga showers His blessing as a King of Mathura on Sundays, in a simple form showing His Lotus feet for the darshan of devotees on Thursdays, with silver coverings on Fridays and as Lord Venkatachalapathi on Saturdays.

Lord appears in fruit Alankara on the Tamil New Year day-Vishu Kani Utsav. On the Gokhulashtami day, Sri Vaishnava Muthagi Sevai is followed. Lord appears in many alluring forms as Rajagopala, Giridhari holding the Govardhana Hill, as Geethacharya, as Parthasarathy and Radhakrishna. It is said that Lord played his flute under the Thamala tree (the sacred tree of the temple) in Dwapara Yuga which drew Radha towards Him. It is noteworthy that this Thamala tree is brought to South. Dwarapalaka idols are made of Panchaloka – a mixture of five metals.

Temple History
In Srimad Bhagavatham, Sri Krishna has told Uddava, that in Kaliyuga, Bhakthi through namasankirtan is the Only easy way to attain spiritual Salvation and that there is no separate Avtar in Kaliyuga. All the great souls like Narada, Vyasa, Sukha etc. of the previous three yugas will be appearing in the earth in different parts of the country as Purandaradasa, Jayadeva, Tulsidas, Kabir, Namdev, Gnaneswar etc. to spread the Bhakti cult and Lord Krishna will descend as Lord Panduranga at the request of Saint Pundalika and He will be gracing these saints and Bakthas to spread the greatness of Bakthi cult through His different Leelas in their lives. That time onwards devotess started thronging to Pandarpur to have the Blessings of Lord Panduranga, particularly on Ashada Ekadasi and Karthigai Ekadasi. With Gurunathar's Blessings, Sri Guruji started visiting the places of these Bakthas and saints to know about their lives and infuse the same to the devotees as Maha Baktha Vijayam during his discourse sessions. On one occasion, in the course of His travels, Guruji visited the village around Pandarpur. In his dream, Sri Gnanananda appeared and directed him to go to Pandarpur.

As per this direction, when Guruji arrived at Pandarpur, the priests ( pandas ) of the Panduranga temple received him and took him round the temple; after performing Archana and Abhishekam gave him the idols of Sri Panduranga and Sri Ragumayi which were worshipped there for a long time. When asked for reasons for their doing so, the priests said that Sri Panduranga appeared in their dream and wanted them to do so. From that time onwards, the idea to have a shrine for the idols sprouted in Guruji's mind. As one can see, it is the blessings of His Master alone, accomplished our Gurji to build this great Temple which provides access to the bakthas from the south to easily reach and pray here instead of going to Pandarpur. The North-South meet at the temple signify our national integration.

The uniqueness of this temple is reflected in the following. The Garba-Griha, Gopuram (sanctum-sanctorum) on the model of Puri Jagannath; the Chola type of Rajagopuram in its artistry and the presiding deities from Maharashtra. The tiny idols of Panduranga-Ragumayi manifested to a big size (viswarupam) are a feast to the eyes. The main mandapams are decorated with mural painting of the leelas of Sri Krishna.

The structure of the temple resemble the Pandaripuram temple in Maharashtra with Lord Panduranga accompanied by Mother Raghumayee blessing devotees. The temple was built by the disciple of His Holiness Gnanananda Swamigal, His Holiness Haridasgiri Swamigal. It is being administered by His Holiness Namanandagiri Swamigal presently.

All the deities related to Sri Chakra worship are in this temple. Prayer is the best path to reach God. Every one can do the worship depending on their means and knowledge. The significance of the temple is the Nama Sangeerthana principles followed in worships because Music takes the soul to God.

Lord Panduranga’s idol is of 12 feet tall made of Salagrama Stone in a standing form with Mother Raghumayee in her pristine beauty. During Sundays, Panduranga appears in the dress of Madura King, in a simple form on Thursdays, in silver coverings on Fridays and in the Form Lord Venkateswara on Saturdays.