Dr. Ravi Kannan is a product of Kilpauk Medical College, Chennai and his MD specialisation was in Oncology / cancer.

He was so.passionate in his work and rose to be the No 2 in the Adyar Cancer Centre after the No 1 Dr.Shantha.

His specialisation was Head and Neck and obviously the most crucial and risky parts in the human body.

In many days, he will do 2-3 long operations each lasting 5-6 hours.

He will hardly have time to go to his house to have bath and food.

Mama, Mami, his wife Seetha and daughter were so understanding and cooperavive with him by not demanding private time for them.

During his adyar centre stint, Ravi Kannan noticed that there are large numbers of cancer patients coming to Chennai all the way from North East India.

Most of them were poor and could not afford to pay for the long travel, stay and food at Chennai even though the cancer treatment was free of cost.

One philanthropist from Silchar offered his land there to build a cancer care centre.

Ravi Kannan discussed the option of moving to Silchar with his parents, wife and daughter.

They readily said Yes, in spite of the fact that his father was old and suffering from a serious respiratory disease and also his mother
getting old and be away from her relatives.

Daughter who was studying in Adyar Vidya Mandir had to leave all her friends to go to a rural area in Silchar.

The salary in Silchar is even less than Adyar Cancer Centre.

Ravi Kannan had to build the centre from the scratch, literally.

Ravi went ahead and slowly built the hospital room by room solely with the contributions from the locals.

Ones personal incident is given below:

'Once when I was doing some projects in Arunachal Pradesh, I decided to visit them at Silchar.

I took helicopter ride from Ita Nagar to Guwahathi and then to Silchar.

From the airport, I had to take a taxi to the hospital. The taxi driver, who took me there was a local.

In my broken Hindi, I conveyed that Dr.Ravi Kannan was my cousin . The taxi driver who demanded Rs.2000 from me earlier for to and fro refused to accept any money once he knew that Dr is my cousin.

When I entered the hospital, the taxi driver informed everybody about me and all the patients ( a huge crowd) started falling at my feet, hugging me and thanking me and talking in their local dialects, obviously in praise of Ravi Kannan.

I could not stop from crying and it slowly sank into my mind that how Ravi Kannan has been helping them at their door step.

His daughter is now doing Medicine at Manipal Academy Sikkim Campus.
__________________
I wish his family all Gods blessings, Long Life and good health and happiness." 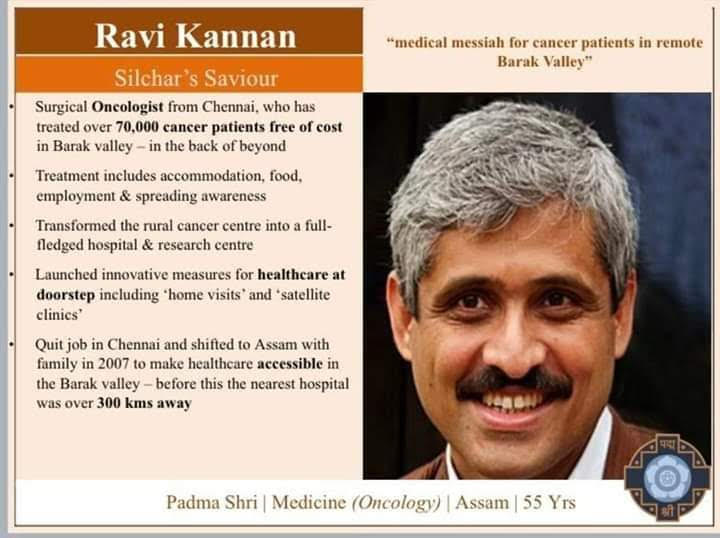