Malware Attacks Used by the U.S. Government Retain Potency for Many Years


A new report from Rand Corp. may help shed light on the government’s arsenal of malicious software, including the size of its stockpile of so-called “zero days” — hacks that hit undisclosed vulnerabilities in computers, smartphones, and other digital devices.
The report also provides evidence that such vulnerabilities are long lasting. The findings are of particular interest because not much is known about the U.S. government’s controversial use of zero days. Officials have long refused to say how many such attacks are in the government’s arsenal or how long it uses them before disclosing information about the vulnerabilities they exploit so software vendors can patch the holes.
Rand’s report is based on unprecedented access to a database of zero days from a company that sells them to governments and other customers on the “gray market.” The collection contains about 200 entries — about the same number of zero days some experts believe the government to have. Rand found that the exploits had an average lifespan of 6.9 years before the vulnerability each targeted was disclosed to the software maker to be fixed, or before the vendor made upgrades to the code that unwittingly eliminated the security hole.
Some of the exploits survived even longer than this. About 25 percent had a lifespan of a decade or longer. But another 25 percent survived less than 18 months before they were patched or rendered obsolete through software upgrades. 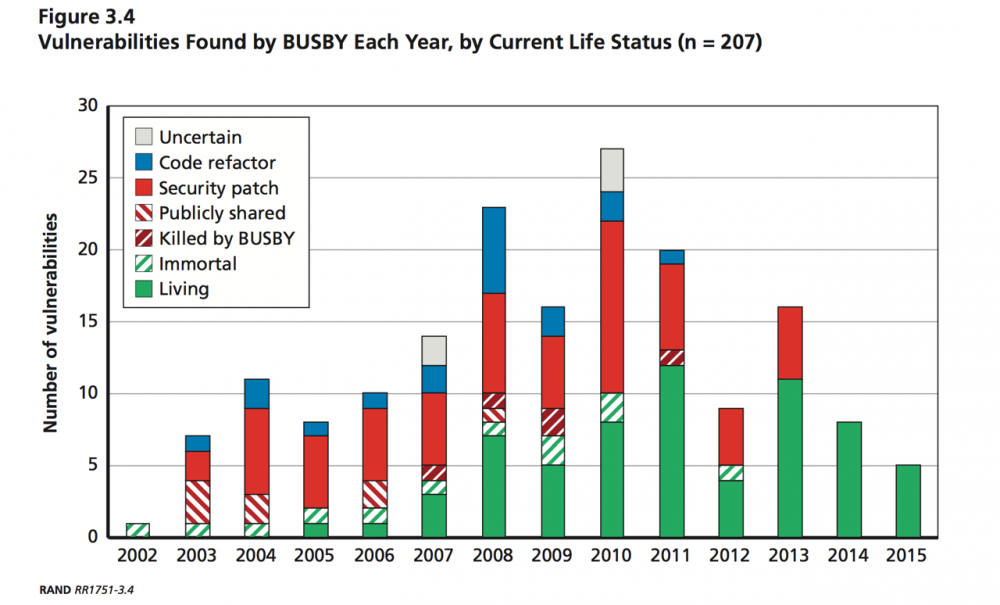 These zero day attacks are flavors of what are known as Advanced Persistent Threats. They linger for a very long time since they cannot be recalled (easily ). Often their success depends on doing damage without being detected