Last Living Member of The First Lok Sabha, This 100-YO Helped Draft The Constitution.

Last Living Member of The First Lok Sabha, This 100-YO Helped Draft The Constitution.

“He (and his team) would carry a typewriter around on their village visits. At every hamlet, he would instantly issue an on-spot official decree to set up a government school & appoint teacher from among the educated in the village.” 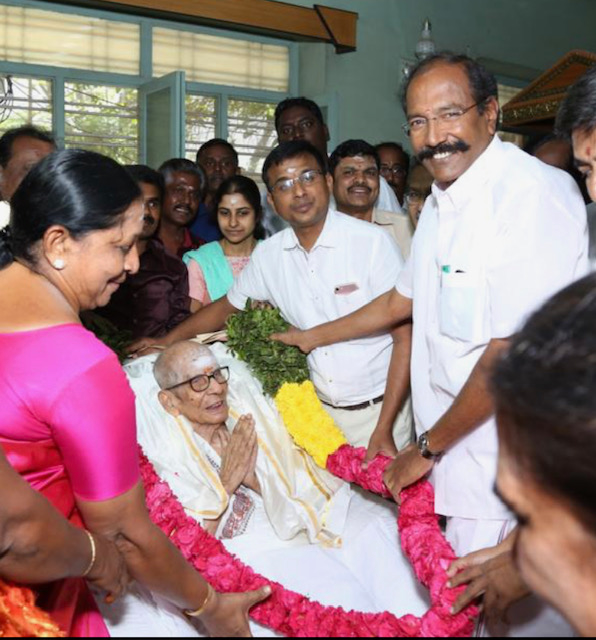 he year was 1942. The country was reeling under an extreme socio-economic crisis as a repercussion of the ongoing World War, and Mahatma Gandhi had just called for the Quit India movement.

Around this time, a 21-year-old young man from Namakkal (erstwhile Salem) in Tamil Nadu was heading a student revolution at Madras, against the British authorities of Loyola College.

That man was TM Kaliannan. He would go on to become one of the signatories of the Constitution and is the only surviving member of the Constituent Assemly, today.

The memorable meeting with Gandhiji – A turning point

A powerful orator and an extremely passionate writer in English, Kaliannan had sowed the seed of nationalism and mobilised over 400 students to form the Tamil Zilla Student’s Association. Following this, the association hoisted the National Flag for the first time on the premises of Loyola College.

When the principal of the college refused to comply with the nationalistic demands of the protesting students, Kaliannan led an 8-member delegation to Sabarmati Ashram to meet with Gandhi, for advice on how to proceed.

“Stay with me for ten days and follow my lifestyle,” the Mahatma calmly advised the agitated man. After a peaceful 10-day stay at Sabarmati, Kaliannan felt he was already a changed person—calmer, respectful and more insightful than ever.

“Corruption is ruining our democracy today”

Like many, the veteran politician is upset about present political scenario of the country, which is shrouded by corruption and unrest. However, he believes that there is hope for things to change for the better.

“The development of India since Independence has been quite commendable. However, the way dishonesty had seeped into the political fabric is adversely affecting our democracy. However, I am sure that people will learn through their mistakes, sooner or later. But, the price for that might be heavy on humanity,” concludes the centenarian.

Last Living Member of The First Lok Sabha, This 100-YO Helped Draft The Constitution

From building over 2000 schools in 3 years & educating 1 crore children, to championing women empowerment, Kaliannan has been the true people's politician.