Tamil Nadu Chief Minister and AIADMK supremo Jayalalithaa kicked off the party’s election campaign at Island Grounds in Chennai on Saturday. Speaking to a massive turnout, the Chief Minister said that it was her goal to introduce prohibition in the state, but it could only be done in a phased manner.

Now it would not be possible to completely ban alcohol production and sale in the state at one go. It has to be done step by step. First we will limit the timings of shops. Then we will close down shops. Then we will shut down bars. And establish rehabilitation centres for people addicted to alcohol,” she said.

Taking pot shots at Karunanidhi and the DMK, she said that he had no right to speak about the prohibition of alcohol since it was his government that removed prohibition in the state in 1971 and introduced a whole generation of Tamilians to alcohol.

Good decision! It has to be in phased matter! Look at what happened in Bihar after introduction of full prohibition wef 1st April 2016!! The fate of tippers has become so severe that 700 have fallen ill & one was found taking bar soap!!
A

JJ has the habit of copying competitor freebies during election time.
V

auh said:
JJ has the habit of copying competitor freebies during election time.
Click to expand...

So long it is beneficial what is wrong in copying good stuff! JJ learnt a bitter lesson in 2006 when she lost the election because of color TV scheme by MuKa & at till that year her party was against large scale freebies! Post that JJ changed her opposition to freebies..Now it is raining freebies for the electorate!!

Post that JJ changed her opposition to freebies..Now it is raining freebies for the electorate!!
Click to expand...

Yes but after coming to Power in 2011 she hiked the Milk and Electricity tarrif too much and that was what created a war between Vijayakanth and Jaya in assembly and we know what happened . The more freebies a party gives be prepared for a hike in some other area . There is no fgree lunch anywhere .
K

tasmac is probably the biggest source of revenue to the state. i wonder how they will come up with ways to match this cash cow.

also one can start once again, after all these years, see, weekend special buses to pondicherry, andhra border & karnataka (and maybe kerala too, if their progress to prohibition stalls).

... and then this horrific bootlegging business - smuggling of liquor into tamil nadu which is a brand new playground for the mafia.

May be an election gimmicks.

JJ is not serious about fulfilling her election promises.
Y

But how will the freebies be sustained? Looks like they would be given a short shrift or may be we better get ready for a steep increases in prices
Y

V.Balasubramani said:
May be an election gimmicks.

JJ is not serious about fulfilling her election promises.
Click to expand...

Revenue from TASMAC in 2015-16, including commercial tax component is stated to be around 30 thousand crores.
This is the govt. revenue.
What would be the. profit of the supplier industry (belongs to..... not a co-born sister's family) ...... this may be again, Rs. 30,000 crores.

Time is not far away.Let us wait and see.

yesmohan said:
Revenue from TASMAC in 2015-16, including commercial tax component is stated to be around 30 thousand crores.
This is the govt. revenue.
What would be the. profit of the supplier industry (belongs to..... not a co-born sister's family) ...... this may be again, Rs. 30,000 crores.

Time is not far away.Let us wait and see.
Click to expand...

everybody is benefitted....except common man...the liqour manfacturer/supplier/party contractors too..
V

yesmohan said:
Revenue from TASMAC in 2015-16, including commercial tax component is stated to be around 30 thousand crores.
This is the govt. revenue.
What would be the. profit of the supplier industry (belongs to..... not a co-born sister's family) ...... this may be again, Rs. 30,000 crores.

Time is not far away.Let us wait and see.
Click to expand...

You mean manufacturing/selling cost is Rs zero??
A

Prohibition would only profit the black market and the mafia. Black money would galore !
OP
OP
V

During MGR's reign, only five companies were allowed to supply liquor to the state-run TASMAC. Today, 12 companies control the vast liquor business in Tamil Nadu. As political fortunes change every five years, so do those of the liquor makers. Take United Spirits Ltd (USL, now owned by Diageo) and United Breweries for instance.

USL enjoyed a 20% market share in Tamil Nadu during the DMK regime. Until 2011, things were hunky dory

Once the regime changed, so did USL's fate. Market share dropped sharply to 12.38% as AIADMK boss J Jayalalithaa swept to power with a large majority. USL's loss was Midas Golden's gain — its market share rose to 16.62% from 7.2% during the DMK years.
Golden Distilleries was set up in 2002, just a year before Jayalalithaa announced the takeover of private shops in the state.

The company is owned by a relative of Jayalalithaa's confidante Sasikala. In late 2011, Sasikala had a public fall from grace, kicked out of the party unceremoniously at Jayalalithaa's behest. She was ousted even from Jayalalithaa's house. This was to prove lucky for USL whose market share again rose to 20%. Jayalalithaa and Sasikala, however, patched up soon enough and all was well with Midas Golden.

You mean manufacturing/selling cost is Rs zero??
Click to expand...

Here no where purchase, sales,profit are not quoted. Only total revenue is furnished. I furnish below the Excerpt from the past speech of K Shanmugam, principal secretary (finance), Tamil Nadu government.

K Shanmugam, principal secretary (finance), Tamil Nadu government, said of the Tasmac’s estimated revenues of around Rs 26,188 crore in 2014-15, the commercial tax component was expected to be Rs 19,081 crore and excise duty would be Rs 6,376 crores.

This is just the revenue part accruing to the exchequer..It does not talk about the buying cost or selling price..There will be set off of taxes too
V 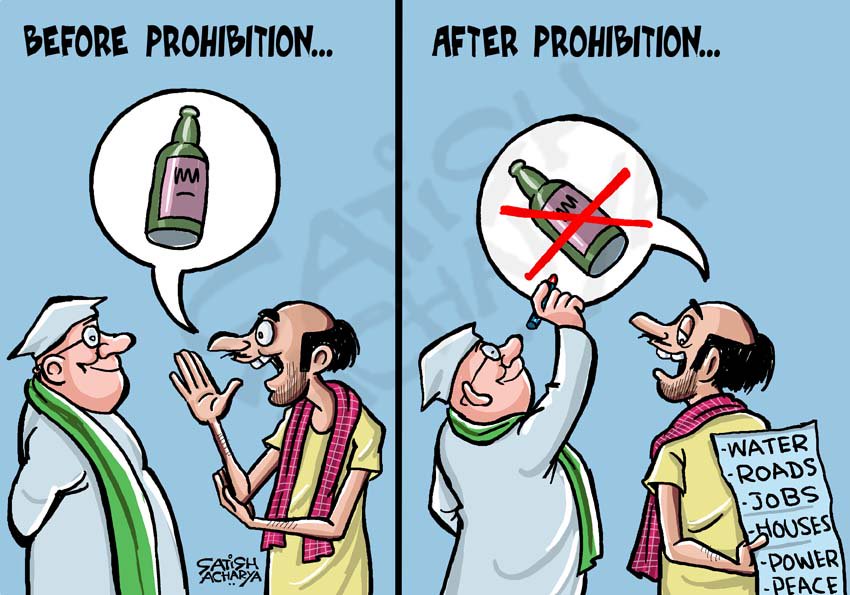 It is not possible for any future Govt to implement total prohibition from the finance angle - the budget deficit cannot be minimised. Other option for the govt is to hike taxes and tariffs, which will be anti-citizens.

Future Govts should desist from spending on unproductive freebies. There is a need for improving the efficiency of Govt offices by more computerization, lesser human-dependent works, greater transparency, cutting scope for corrupt practices etc. Both DMK & AIADMK are incurring wasteful expenditure in projecting their achievements - for which tax payers' money should not be used.

However, the AIADMK is better in financial administration than the DMK, as evident from the performance of the state-owned enterprises in the past ten years....
C

The pattern of liquor consumption has changed a lot over the years.

In the 60s and early 70s, it was confined to only few group of people, who used to frequent nearby places where prohibition was not in force. In Tamil films, scenes relating to liquor were few.

One of the negative aspects of liberalization/globalization, explosive growth of IT sector, Internet and middle class make movement of money freely which, in turn, makes liquor an essential part in social gathering, whether rich or poor. Almost all Tamil films, of late, have one or two scenes of hero or comedian consuming liquor.

Even if it doesn't bring enough money to Govt., full prohibition may not be possible. Can the Govt. ban liquor scenes in Tamil films and sales in Five Star Hotels? Lot of foreigners are employed here. Where will they go?

One more slogan 'prohibition' is added to the bandwagon of 'slogans' which are not solved but are being used for election purpose - Cauvery Water, Mullaiperiyar, Sethu Samudram, Katchathivu, Imposition of Hindi, eradication of caste etc.

It is a tough task indeed to implement prohibition! Hope the poor are not pushed from liquor to drugs!

R
No record of a will by Jayalalithaa, says RTI reply: So what happens to her property?