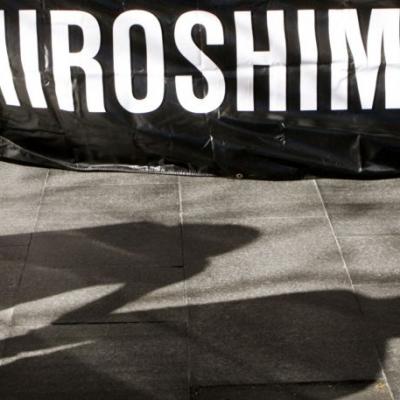 Japan today marked 71 years since the city of Hiroshima was destroyed by a US atomic bomb, as its mayor urged the world to unite in abolishing nuclear weapons.


The annual ceremony came just months after Barack Obama became the first sitting US president to visit the city, paying moving tribute to victims of the first atomic bomb.


American B-29 bomber Enola Gay dropped its deadly payload, dubbed "Little Boy", on the western Japanese city at 8:15 am local time on August 6, 1945.

Hiroshima mayor Kazumi Matsui recalled the visit by Obama in his peace declaration during the solemn ceremony.


"(His visit) was the proof that Hiroshima's strong wish not to tolerate the 'absolute evil' was shared by President Obama," he said.

"It is the time for us to make actions towards the abolition of the 'absolute evil', the ultimate form of inhumanity, united and with passion."

The bombing claimed the lives of 140,000 people. Some died immediately while others succumbed to injuries or radiation-related illnesses weeks, months and years later.

71 years ago on this day (August, 6, 1945) a premidated heinous crime of great magnitude took place at Hiroshima, Japan. It was on this day a nation which claims to be "most civilized" did an act of terrorism by using nuclear Bomb first against humanity which annihilated 246000+ human lives from the planet.
Let us pray for the departed souls of innocent men, women and children.

im not justifying this act....but .....each and every action opposite reaction....peal harbor bombing also happened....

the nation was disturbed....even with out this bombing...the second world war never ends...other side of coin....

many killed in mahabharata/ramayana too...but we justified as DHARMA AGAINST ADHARMA...these things are