WASHINGTON, DC: Dr. Sangeeta Bhatia, a faculty member of the Massachusetts Institute of Technology, has been named a recipient of the 2015 Heinz Award for Technology, the Economy, and Employment in recognition of her work in tissue engineering, disease detection and advocacy for women in STEM. 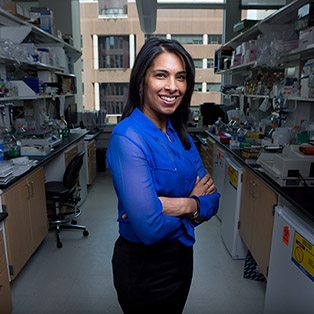 Bhatia, an innovative scientist who applied the principles of microchip fabrication to develop artificial human “microlivers” now widely used to screen drugs for toxicity—part of an ongoing effort to develop artificial livers suitable for transplant— will get as part of the award announced by the Heinz Family Foundation, an unrestricted cash award of $250,000.


Bhatia is the John J. and Dorothy Wilson Professor of Health Sciences and Technology and Electrical Engineering and Computer Science, at MIT.


The Heinz Awards honor the memory of the late U.S. Senator John Heinz by recognizing those who have made outstanding contributions in one of five critically important categories: Arts and Humanities; Environment; Human Condition; Public Policy; and Technology, the Economy and Employment.


In addition to her breakthrough achievements with microlivers, which could help transform the search for malaria cures, Bhatia is developing simple, affordable cancer screening tools. One uses tiny particles or “nanoparticles” that can create “biomarkers” for cancer in urine samples on paper strips. The other is a “cancer-detecting yogurt,” containing engineered probiotic bacteria. The yogurt could provide evidence of the spread of liver tumors of colorectal cancer in mere urine samples, offering a potential alternative to costly and cumbersome colonoscopies.

“Sangeeta Bhatia is a quintessential problem-solver who combines her curiosity and amazing scientific expertise with a deep concern for others to push forward the frontiers of medical science. A passion to solve problems affecting human health lies at the core of her innovative work, but she extends that same passion into her efforts to bring more women into STEM-related fields,” said Teresa Heinz, chairman of the Heinz Family Foundation, in a statement. “By definition she is a role model for young women who might want to follow in her path, but in her quest for practical solutions to major challenges she is really a role model for us all.”


As a graduate student at MIT, Bhatia used microfabrication—a process typically used for laying circuits out on silicon chips—to “print” little human livers on plastic. The microlivers are now used by dozens of biopharmaceutical companies as a way to assess drug candidates for liver toxicity before moving them into clinical trials. The microlivers can also be infected with malaria parasites, providing a powerful laboratory tool for developing drugs that can eradicate the “reservoir” of parasites that remain in the livers of patients even after their symptoms subside.

“My team is working at the nexus of engineering, medicine and biology where today there are many exciting opportunities to make an impact on a wide range of diseases,” said Bhatia. “I’m grateful that the Heinz Award is recognizing the potential to translate breakthroughs originating in engineering like nanotechnology and microfabrication into new tools for making better medicines and, perhaps eventually, into transformative therapies like an artificial liver for patients in need of a transplant.”


In addition to her scientific achievements, Bhatia is a strong proponent of attracting more women to study science, technology, engineering and mathematics—the STEM fields. She helped found an outreach program, Keys to Empowering Youth, which is working on college campuses to attract young girls to engineering. In addition to her teaching and laboratory duties, Bhatia is the founder of two companies that have put her discoveries, like the microlivers, into production.


Bhatia will receive her awards at a ceremony in Pittsburgh on May 13, 2015. There, she will be honored along with the Heinz Award recipients in the four other categories: Roz Chast, a best-selling illustrator and cartoonist (arts and humanities); Frederica Perera, an environmental health researcher at Columbia University (environment); William McNulty and Jacob Wood, founders of Team Rubicon (human condition); and Aaron Wolf, a geoscientist and professor at Oregon State University (public policy).

Now in its 20th year, the Heinz Awards has recognized 123 individuals and awarded more than $21 million to the honorees.

R
What Really Is The ‘Buy American, Hire American’ Order And Will It Impact Indian Prof