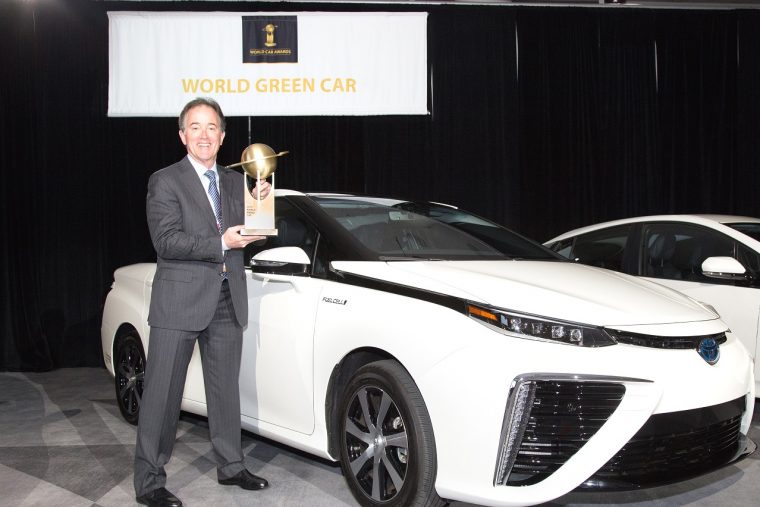 Currently, the Toyota Mirai is only sold in California here in the United States, due to a lack of refueling infrastructure elsewhere. The Mirai is fueled by hydrogen alone, meaning its only byproduct is water. Some critics argue that hydrogen fuel cell vehicles are just as dirty “behind the scenes” as electric vehicles, however, because burning fossil fuels is the easiest way to mass produce the hydrogen needed to power these cars. Toyota, however, is currently investing in wind-powered hydrogen production as a viable and clean way of generating the fuel necessary to power its Mirai.
Because of the perceived cleanness of the Mirai, the fuel cell vehicle took home the 2016 World Green Car title at the New York Auto Show.
“Just as Prius changed the world nearly 20 years ago, the hydrogen-powered Mirai is ready to make history,” remarked Bill Fay, group vice president and general manager, Toyota Division. “With a range of over 300 miles per tank, a refueling time of under five minutes, and emissions that consist only of water vapor, Mirai is leading the world forward toward a more sustainable future.”
The Mirai was up against seven other vehicles globally. Ultimately, judges chose the Mirai after comparing it to the competition in areas such as fuel consumption and tailpipe emissions. The judging panel included 73 auto journalists from around the world.
Did You Know? The Toyota Mirai acted as a pace car at a NASCAR race
This marks the 12[SUP]th[/SUP] year for the World Car Awards, including the World Green Car award. Toyota has taken home top honors in these awards before. Back in 2006, the Toyota Harrier Hybrid earned World Green Car. Then in 2009 the Toyota iQ was placed in the “Top Three in the World” for the World Car of the Year overall award. The Toyota GT86 earned the same honor in 2013. The Toyota Prius was a double winner, having earned “Top Three in the World” for World Green Car and World Car of the Year in 2010.

Whether the hydrogen-powered Mirai is suitable in Indian road conditions and accident prone roads and traffic ?

It is also said hydrogen-powered vehicles which have high speed record, could not with accident.

V
Scientists have turned hydrogen into a metal, by crushing it with diamonds