Forwarding a message in social media is equal to endorsing it, says HC

So, social media users need to take note of this judgement.

”Law is the same to everyone and we should not lose faith in the judiciary. Mistakes and crimes are not same. Only children can make mistakes which can be pardoned. If the same is done by elderly people, it becomes an offence.'
[h=1]S Ve Shekar case: Forwarding a message is equal to endorsing it, says HC[/h]
The court made these observations while denying bail to actor and BJP State Secretary S Ve Shekher.

In an important judgement on Thursday, the Madras High Court observed, “Forwarding a message is equal to accepting the message and endorsing the message.”

The court made the observation while dismissing a petition by actor and BJP State Secretary S Ve Shekher, two weeks after he sought anticipatory bail in connection with a derogatory post about women journalists shared on his social media acount.
He had shared a post on his Facebook page on April 19 which alleged that women journalists 'sleep around to get top posts'.
The post titled 'Madurai University, Governor and virgin woman’s cheeks' came after a female correspondent of an English magazine accused the Governor of Tamil Nadu, Banwarilal Purohit, of inappropriate behaviour.

The journalist lodged a complaint against Shekher with the Central Crime Branch on April 20.

S Ve Shekher had apologised soon after and said that he put up the post on his timeline without actually reading.
“Yesterday, my face book, a message, without reading the content, by mistake forwarded by me FROM THIRUMALAI Sa Was unintentional (sic),” read a statement issued by S Ve Shekher.

He says in a statement that he removed the post after his friend pointed out that it was abusive. “When it was pointed out by a friend of mine that the content was abusive, it was removed immediately. I do not endorse the views expressed in it. I come from a family that respects women and journalists,” said Shekher in his statement.

However, the Madras High Court did not agree with his claims.

Emphasising the social responsibility that celebrities carried, it said, “What is said is important, but who has said it, is very important in a society because people respect others for their social status. When a celebrity-like person forwards messages like this, the common public will start believing that these types of things are going on. This sends a wrong message to society at a time when we are talking about women empowerment.”

He apologized for sharing an abusive post in Face Book

Against complaint, a case was registered against him and he was denied Anticipatory bail by the High Court. 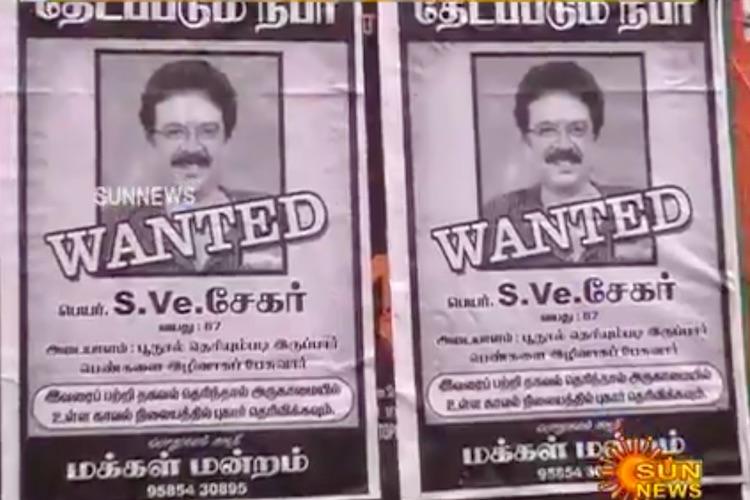 Meanwhile, a counsel on behalf of the petitioners said that not arresting S Ve Shekher would amount to the police disrespecting the court’s order.

It has been over three weeks since a case was filed against politician and actor S Ve Shekher following a complaint registered by the Tamil Nadu Journalist Protection Welfare Association (TNJPWA). While no arrests have been made yet, city’s walls are now splattered with “wanted” posters of the actor.

The posters are emblazoned by a black-and-white photo of the actor, and the text says that ways to identify him are to look for a visible
poonal (ritual thread) and for someone who speaks disrespectfully of women.

The poster also requests anyone who identifies him to immediately report to the nearest police station and also lists a contact number.

Spreading the message of Swachh Aadat across the country

Rajnath Singh's Message In Islamabad On Terror Blacked Out By Pakistan