Share:
Facebook Twitter WhatsApp Email Share Link
Is this trampling freedom of expression? I do not think so...We have seen many movies that have berated Hindus, Brahmins..Now this movie has portrayed a Rajput woman in very bad light!! Can minorities be berated or lampooned in movies...We all know the fate of Viswaroopam and Thuppaki movies where protesters ensured that the controversial scenes were removed 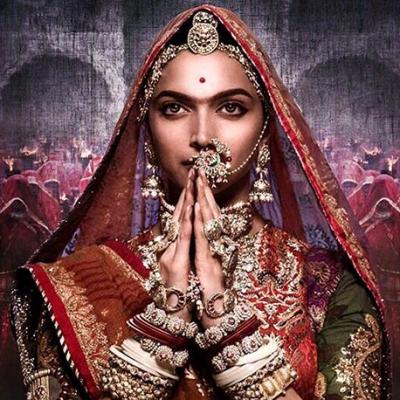 The first reaction by a senior BJP minister on the Padmavati controversy. Road Transport and Highways minister Nitin Gadkari blames filmmakers saying, the freedom of speech is not absolute. "Padmini part of our history. The film cannot distort history. The film needs to maintain cultural identity and sensitivity," he said in an interview with India Today. He maintained that people have a right to be offended.

The Sri Rajput Karni Sena chief Lokendra Singh Kalvi has said that actress Deepika Padukone who essays the role of Rani Padmini of Chittor should be given the same treatment that Lakshman did with Ravana's sister Shurpanakha. In the epic Ramayana, Lakshman cut off the ears and nose of the Shurpanakha. The Karni Sena said if need be action will be taken against the actress.

Kalvi also warned of dire consequences if the release of 'Padmavati' was not stalled. The period drama, starring Deepika Padukone, Ranveer Singh and Shahid Kapoor, has been facing protests from various groups for allegedly tampering with historical facts.

Gold Member
All Deepika said is this...

"Where have we reached as a nation? We have regressed. The only people we are answerable to is the censor board, and I know and I believe that nothing can stop the release of this film."

For that everyone got worked up and even offered 5 lakhs for her head.
She has been threatened to have her nose and ears cut off like what Lakshman did to Surphanka.


What was so wrong in her reply?

Its strange..Deepika spoke her mind..a brave woman yet men want her killed.

I thought the character Padmavati is all about a brave woman but here a brave Deepika gets death threats.

And another complain was that Deepikas outfit shows a bit of her midriff.

Doesnt a lehenga or a saree for the matter show a peek of midriff?
What do these Sena expect? That Padmavati wore a Hijab and Burkha?


I dont understand why violence is the preferred rule these days.

Gold Member
Eminent historian Prof Irfan Habib said Padmavati was a character in the book Padmawat written by Malik Mohammad Jaisi in Bhaktikal, which has no connection with history at all.
“Jaisi had penned it (the book) during Akbar’s reign around 1550 AD, wherein he had mentioned Alauddin Khilji. But Khilji existed from 1296 to 1316,” he said.

Commenting on the need to de-link works of fiction from history, Habib said, “There are stories in every country, but they cannot be accepted as part of history. England has a story of Robinhood, but it was never treated as history. But in our country, myths and stories are given a status of history.”

Defending the movie, actor Deepika Padukone, who plays the role of Padmavati in Bansali’s film, said: “I am sure that we have not tampered with history. We are bringing the story of a brave woman on the silver screen”.

Gold Member
Rani Padmavati has been seen as one of the proud Rajput heritage. Padmavati’s tale of defending her honour against the Muslim invader, Alauddin Khilji has been told through the years and has made her a historical figure in several novels, plays and television.

While most history books speak of thebirth,childhood and life of historical characters like Prithviraj Chauhan, Shivaji Maharaj, etc. the first mention of Padmavati was found in a 1540 CE Awadhi language poem by Malik Muhammad Jayasi.

The poem, Padmavat mentions the beauty of Rani Padmavati and her association in Alauddin Khilji’s conquest of Chittorgarh. Before this Sufi poem, there are no mentions of the queen of Chittorgarh.Sufi poet Jayasi made up the story that later got legend status, so Bhansali can't be threatened for taking creative licence with the tale, say historians

Sanjay Leela Bhansali's upcoming film, Padmavati, is a story about a story. It is based on a 16th century literary saga by Sufi poet Malik Muhammad Jayasi, a romantic fiction about Delhi sultan Alauddin Khilji's sack of Chittor which itself had occurred over 200 years earlier, in 1303. In Jayasi's allegorical poem, a Rajput queen of Chittor chooses to immolate herself rather than submit to the sultan.

The myth, written in Avadhi in 1540, 30 years before Tulsidas began his Ramcharitmanas, has ended up being taken literally as history. It created, out of whole cloth, the legend of Padmini or Padmavati, the Ceylonese princess turned loyal queen —there is not a shred of historical evidence that she existed. And because of the popularity of the epic, the actual Alauddin Khilji, destroyer of the Mongols and one of India's most able administrators, is only remembered as a thwarted lover-boy, whose obsession and lust for another man's wife leads him to destroy a kingdom.

The legend has been passed down as popular history for years and used to demonise Islamic empires. And now, custodians of that made-up 'history' have used it to attack another cultural work — storming the sets of Bhansali's forthcoming period drama Padmavati, at Jaipur's Jaigarh fort.

Gold Member
Did Jayasi himself claim to be chronicling history? According to the Imperial Gazetter of India, 1909, "In the final verses of his work, the poet explains that it is all an allegory. By Chittor he means the body of man; by Ratan Singh, the soul; by the parrot, the guru or spiritual protector; by Padmavati, wisdom; by Alauddin, delusion, and so on."

It explains the ideals that animated Jayasi's noble epic: "Throughout the work of the Musalman ascetic, there run veins of the broadest charity and of sympathy with those higher spirits among his fellow countrymen who were searching in God's twilight for that truth of which some of them achieved a clear vision." In other words, the Sufi poet was using his creative licence to convey a philosophical message. And that creative licence is exactly what Bhansali is now being punished for.