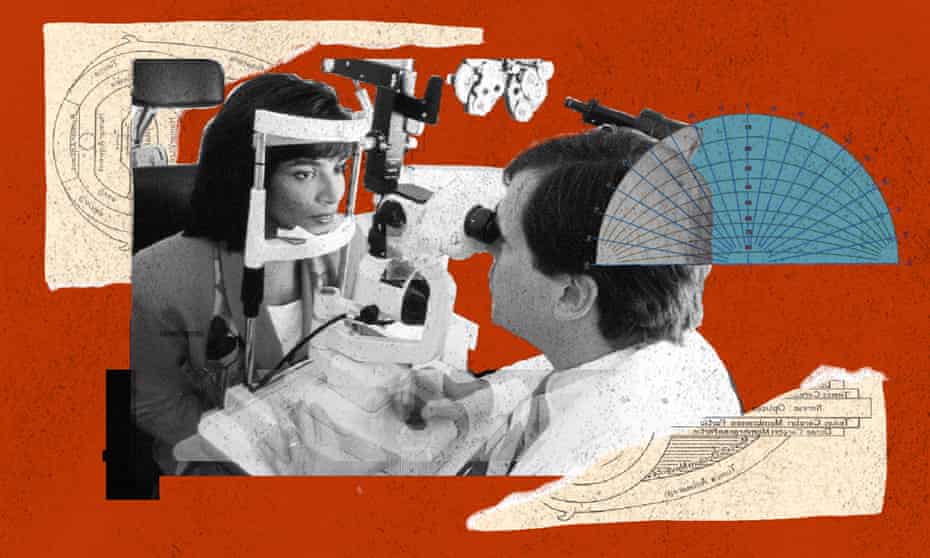 Myopia affects half of young adults in the US, twice as many as 50 years ago and over 40% of the population. Composite: The Guardian/Getty Images/Unsplash
How much extra time on screen have you had in the past 18 months? It may be causing nearsightedness – but there’s hope for reversing it


How close is the smartphone or laptop you’re reading this on from your eyes? Probably just a few inches. How long have you spent looking at a screen today? If you’re close to the average it’s likely to be over nine hours.
New research from ophthalmologists shows that our constant screen time is radically changing our eyes. Just like the rest of our bodies, the human eye is supposed to stop growing after our teens. Now it keeps growing.

When our eyes spend more time focusing on near objects, like phones, screens or even paperbacks, it makes our eyeballs elongate, which prevents the eye from bending light the way it should. This elongation increases nearsightedness, called myopia, which causes distant objects to appear blurred. Myopia affects half of young adults in the US, twice as many as 50 years ago and over 40% of the population.

When many of us began working from home, researchers predicted this dramatic online increase would cause never-before-seen eye dysfunction. They were right
Click to expand...

For adults this might cause eye strains or speed up existing vision issues. But for kids, whose eyes are still developing, the situation is so dire that the American Academy of Optometry and American Academy of Ophthalmology both consider myopia an epidemic.
Working for prolonged periods, whether texting, reading or jotting emails is what optometrists call “near work”. The trouble with holding a screen close to your face isn’t about light shining into your eyes, it’s about the strain of the eye. For one, your eyes blink far less when they’re focused so closely. As you’re holding your phone in your hand, performing near work, your muscles stretch and your lenses shift since our eyes over-accommodate to constant close-distance tasks. That’s why they’re growing.
When you put on a pair of glasses, your eye muscles relax because they’re no longer straining. Ditto if you put down your phone – sans glasses – blink a couple times and stare off into the distance for 20 seconds.
Does this affect you? Probably. How much extra time on screen have you had in the past 18 months? How much work have you been doing from home? Pre-pandemic, our phones were already constant companions. When many of us began working from home and e-learning last year, researchers predicted this dramatic online increase would cause never-before-seen eye dysfunction. They were right.
Last spring, Chinese researchers tested over 120,000 Covid-quarantined students aged six to eight and found myopia and other vision issues linked to home confinement increased up to three times compared with the previous five years – that’s with as little as 2.5 more hours of e-learning (not counting video games, social media, etc). Results for US students could be much higher since many American kids spend most of their days online. “Virtual learning has definitely increased myopia,” says Dr Luxme Hariharan, of the Nicklaus children’s hospital in Miami, Florida, who points anecdotally to a huge shift in cases in the last year. “Prolonged near work [like looking at screens up close] makes our eyes overcompensate.”
“We can clinically measure the millimeter lengthening of the eyeball,” explains Dr Eric Chow, a Miami, Florida optometrist. “Studies have shown that the longer the axial length, the higher the risk of eye diseases like glaucoma, retinal detachment and cataracts.”
Straining vision introduces a host of eye-related health problems. And it’s more than just kids needing prescriptions. “People say ‘oh, it’s just glasses,’” says Dr Aaron Miller, a pediatric ophthalmologist at Houston Eye Associates. “The nearsighted have much higher chances of retina tears and glaucoma, bigger issues secondary to nearsightedness. It’s the long game we worry about.”
He adds: “The shape of the eye is round like a basketball,” he explains. “When an eye becomes nearsighted, myopic, the eye is longer, like a grape or olive. The retina – the coating – can get stretched and thinned. As we age, sometimes there can be breaks in the retina. Like cracks in wallpaper. When that occurs, these cracks cause fluid to enter in behind the wallpaper, that’s what we call retinal detachment which causes a lot of people to go blind.” 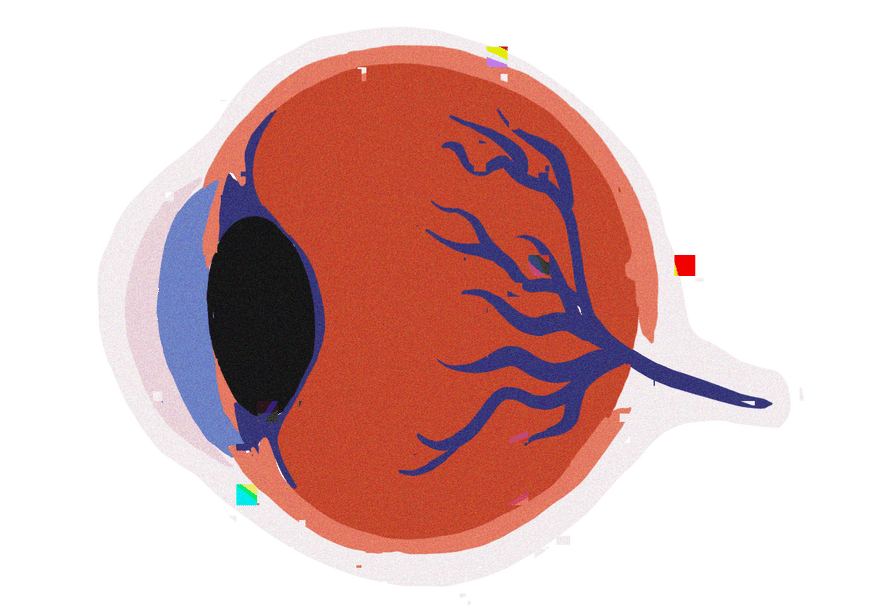 Illustration: Rita Liu/The Guardian
This isn’t just a western problem. There is a genetic component here, but it’s clear that behavior accelerates the change. Poor eyes can lead to decreased work efficiency and huge loss of productivity – think money–for multinationals. That’s why nations like China are so worried about this that they have already changed their education system, limiting how long students study – even extra tutoring – to curb the near-work that heightens myopia. The US should do the same, says Miller.
Labeling myopia a second public health crisis is no hyperbole. 10-year-old Aleena Joyce’s screen time tripled in the last 18 months, with many school days – and two-thirds of Aleena’s waking hours – held almost entirely on her iPad. The Illinois fourth-grader had already been diagnosed with myopia – nearsightedness – in kindergarten, and her eyes had worsened each year.
“Sometimes we would have to go in prior to her annual eye exam because she noticed more difficulty with reading the board at school,” says Yusra Cheema, Aleena’s mother.
Aleena was one of a handful of students who said that their vision had markedly worsened in connection with increased screen time. The parents of Alan Kim, the child actor and nine-year-old Minari star, said their son’s prescription doubled in the last year in part due to the near work of on-set studies held on his iPad.
Each child now uses new FDA-approved contact lenses that effectively reshape the eye to slow down myopia. But most parents and their kids have no idea this issue even exists.
These problems affect adults too. Constant connection can heighten high or degenerative myopia, severe nearsightedness that progressively worsens and can lead to cataracts, glaucoma and retinal detachment – since the eyeball stretches and the retina thins – but thankfully, it’s rare. Risk grows with age, and can speed up gradual loss of the eye’s ability to focus, called presbyopia.
Detection can help. Home approaches like GoCheckKids, an FDA-registered vision screening app allows any parent to take a photo of their child’s eyes to analyze how light refracts and measure their risks for near or farsightedness and other eye diseases.

Dr Luxme Hariharan
Specialized contact lenses are another major tool, says Dr Michele Andrews, a vice-president of CooperVision, the company behind the FDA-approved MiSight contacts. “It’s a contact geared for children aged eight to 12 whose eyes are growing,” she explains, “Which slow down the progression of myopia and change the shape of the eyeball.”
Last week at the American Academy of Optometry meeting in Boston, an annual eye research conference, Andrews presented the results of a seven-year study that showed abnormal axial length growth slowed by an average of 50% among eight-to-17-year-olds who wore her company’s corrective contacts. Perhaps most striking is for those who suffered from myopia, wore the lenses, then stopped wearing them, “we learned there is no rebound effect,” she says. “Myopia did not come back” after kids stopped wearing her company’s contacts. That’s because these lenses “change the way the light bends inside the eye and pulls the image in front of the retina”, she says, which slows axial growth because the clear image is now in front of the retina. If there’s no reason to grow then the problem resolves itself early.
As myopia is typically most pronounced – and dangerous – as the eyes grow, this solution is geared for kids. But adults have hope too. “Spend more time outdoors,” recommends Chow, at least two hours daily. “Studies have shown that increased sunlight decreases myopia progression.”
Most important is taking breaks which help eyes rest, blink and lubricate. Then there’s the 20-20-20 model. “Every 20 minutes, look at a distance 20 feet away, for 20 seconds,” Hariharan advises. “Being on the computer for hours on end isn’t good for your health. Don’t break to play video games or pick up another screen. Go outside!”