Did not live off tax payer's money: Obama 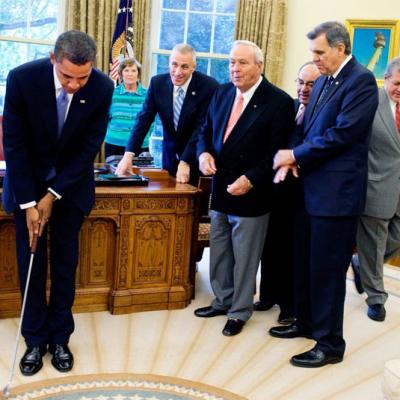 Looking forward to getting out of the "bubble", outgoing US President Barack Obama has contradicted the general perception of him living off taxpayers' money in the White House, saying he bore all his family's expenses, including the cost of toilet paper.


"You know, I mentioned how I've got a pretty thick skin in this job. You've got to have it. One thing that did kind of get under my craw sometimes was people talking as if when we went on vacation or-- ' that people'd be like, 'Oh, spending taxpayer money'. It's like, 'No, no, I actually I'm paying for all of this'," Obama said as he contradicted the general impression that he lived on taxpayers' money and had never had to use his wallet.


"The only thing I don't pay for is Secret Service and an airplane. And communications, because I don't have any choice," Obama was quoted as saying by the CBS News in his last interview before he hands over the reign to his successor Donald Trump on January 20.


"But, you know, we buy our own toilet paper even here in the White House. You know, it's not free. I've got a grocery bill at the end of every month. You know, our toothpaste, our orange juice, that all gets paid. But it is true that I don't carry my wallet that often," Obama said.


Obama said one thing is certain on January 21, the day after his presidency ends, that he will not set an alarm. "Well, here's one thing is I'm not setting my alarm. That, I'm certain of. That I am absolutely positive of. I'm going to spend time with Michelle. And, you know, we got some catching up to do. We've both been busy," he said. Obama, the first black American president, said he is looking forward to getting out of the bubble.

Did Lord Ram err in His duty as husband?

I am a Tamil Brahmin and I recently did my DNA test. I want to share some interesting ancestry information.

Why Krishna, Balarama did not become King of Mathura or Dwaraka ?