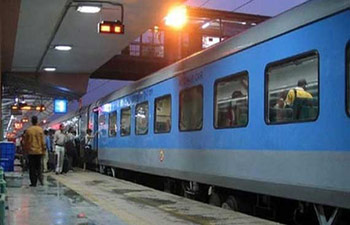 The Delhi-Agra semi-high speed train will be named Gatimaan Express and will have LCD TVs installed behind each seat and emergency braking system.

It proposes to reduce travelling time between Delhi and Agra to 105 minutes.


To be flagged off from New Delhi station next month, the train's name has been chosen because of its capability of running at 160 km per hour speed, the maximum till date in Indian Railways, a senior Railway Ministry official said.


Equipped with comfortable seating arrangement, there will be eight-inch LCD TV screens installed behind each seat, the official said, adding there will also be automatic fire alarm with emergency braking system and passenger information system.


However, in the initial days, the passengers of Gatimaan Express will have the opportunity of watching pre-recording programmes only as the live feed will be provided later on.


The first semi-high speed service of the Railways is considered to be a boon for tourists visiting the city of Taj Mahal.

"We have sought safety certificate from Commissioner Railway Safety to run the semi-high speed train next month as all necessary preparations are being completed now," Railway Board Chairman Arunendra Kumar told PTI.


Asked when the train is scheduled to be flagged off, he said, "The date will be decided after getting the safety certificate but certainly before November 30."


Railways has already conducted two trials of the train in the past and all other arrangements like fencing off certain areas along the route and upgrading of signalling system are being carried out.


Equipped with a 5,400HP electric locomotive, the train will run at maximum speed of 160 km per hour and is expected to cover the 200 km distance in about 105 minutes.


There are 14 new LHB AC coaches manufactured at Rail Coach Factory at Kapurthala for the train and expected to roll out by month end, said a senior Railway Ministry official.


While 12 coaches will be used for daily running, two will be kept as spare ones, the official added.


The train will have Executive Class and Chair Car category of seats and also catering facility.


Railway authorities are also planning to launch similar trains in eight more routes including Delhi to Kanpur and Delhi to Chandigarh.

First high-speed train between Delhi and Agra from November 10

Delhi to Agra in 90 minutes by train soon