Defence ministry clears military purchases worth Rs 2,920 crore, rifles from US among them

Gold Member
India’s defence acquisition council (DAC) on Monday cleared the decks for the purchase of military hardware worth Rs 2,290 crore, including assault rifles for frontline troops from the United States and the smart anti-airfield weapon, a defence ministry spokesperson said.

The Indian Army is laying the groundwork to buy an additional 72,000 Sig Sauer assault rifles from the US, officials said. These rifles will cost Rs 780 crore, the spokesperson said.

This proposed purchase follows an order for 72,400 assault rifles placed with the US last year. India signed the previous order worth Rs 700 crore in early 2019 and the deliveries of all the rifles have been completed.

The DAC, headed by defence minister Rajnath Singh, also cleared the purchase of the smart anti-airfield weapon at a cost of Rs 970 crore to add to the firepower of the navy and the air force, the ministry said in a statement.

“The DAC approved procurement of static HF transceiver sets…The HF radio sets will enable seamless communication for the field units of army and air force and are being procured at an approximate cost of Rs 540 crore,” it added.

The Sig Sauer rifles are being bought to meet the army’s requirement of a total of eight lakh assault rifles. The new assault rifles will gradually replace the flaw-ridden 5.56mm INSAS (Indian Small Arms System) rifles inducted around 22 years ago.

The remaining requirements of the army will be met through a Make in India project for the local production of AK-203 assault rifles at Amethi’s Korwa, and this procurement is in its final stage. Defence ministry clears military purchases worth Rs 2,920 crore, rifles from US among them

This proposed purchase follows an order for 72,400 assault rifles placed with the US last year. India signed the previous order worth Rs 700 crore in early 2019 and the deliveries of all the rifles have been completed.


What happened to "Make in India"?

The recently projected import of 72,400 US-made assault rifles for the Indian Army as an emergency purchase – made in response to the ongoing military face-off with China – best illustrates all that is inefficient, deficient and confused in the country’s military equipping and procurement procedures and policies.

It also explains the reason behind the services’ continually deferred modernisation, and the inability – or unwillingness – of civil and military officials in acknowledging that the six-year-old ‘Make in India’ initiative to reduce imported materiel dependency, has badly faltered.

Regrettably, ‘Make in India’ appears to be a slogan that is repeatedly regurgitated to create the impression that some new impetus is being provided to ‘atmanirbharta‘ or self sufficiency.

This stark reality became evident, even amongst diehard loyalists, by the Modi government’s knee-jerk reaction to the Chinese standoff in Ladakh in fast-tracking the pending import of assorted platforms and defence equipment, to plug long-pending gaps in India’s flailing military capability.

Assorted missiles, precision guided munitions for 155mm howitzers from the US and anti-tank guided missiles (ATGMs) from Israel comprise some of the other anticipated imports to seemingly counter the challenge posed by China’s military along the line of actual control (LAC) in eastern Ladakh.

The paradox, however, is that almost all this materiel – barring possibly ammunition and missiles – will almost certainly not be delivered before the next 2-3 years. The earliest that the first of the 33 fighters, for instance – 21 Fulcrum MiG-29s and 12 Sukhoi Flanker Su-30MKIs to be licence-built by Hindustan Aeronautics Limited – can be provided, is 2023-24.

Front line infantry and Rashtriya Rifles (RR) units deployed on counter insurgency operations however, preferred the tested Russian Kalashnikov AK-47 of which 1,00,000 were imported from Bulgaria in 1995 for $8.3 million as a ‘stop gap’ measure. 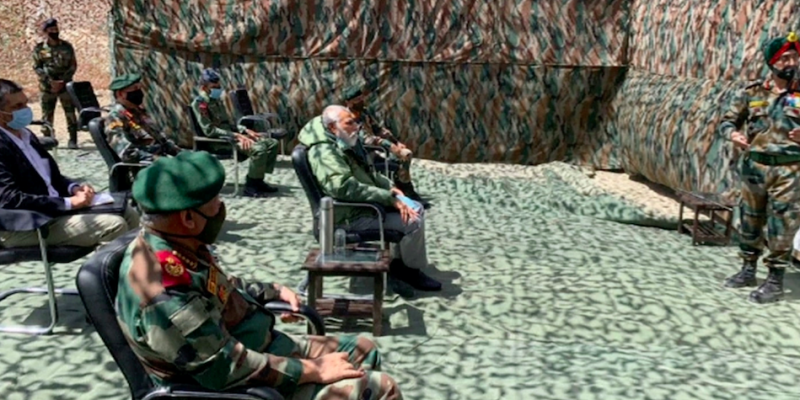 Between flawed designs and changing specs, the military and defence ministry have gone around in circles for 30 years. Now, weapon system purchases are being fast-tracked because of the China standoff but delivery could take 2-3 years.

For a country that can successfully send probes to Mars and the Moon, build nuclear-powered submarines and develop an anti-satellite missile, India has been unable to manufacture a quality infantry assault rifle – that most rudimentary of weapons. Not just rifles and handguns, but even the ammunition required to fire them has been in short supply, with no less than the army chief revealing that the world’s second-largest army had barely enough ammunition to fight a war for four days.

Countries that are mere specs on the map, such as Hungary and the Czech Republic, have done a lot better than India in the area of small arms and munitions. Even as these countries export rifles all over the world, India’s state-owned Ordnance Factory Board (OFB), which has a monopoly on small-arms production, has for decades cranked out rifles and handguns of extremely poor quality. These include the Indian National Small Arms System (INSAS) 5.56 mm rifle which has let down our soldiers in a variety of battle environments – from the icy mountains of Kargil to the tropical Maoist-infested jungles of Chhattisgarh. This has led to emergency imports of assault rifles on a frequent basis, draining billions of dollars from the defence budget.

It may be debatable, but there is a strong view among the military analysts that the OFB, which falls under the Department of Defence Production, does not have the technology for delivering the next generation of small arms. Plus, it lacks the capability to produce the huge quantities required for India’s massive military, so runs the argument.

The Indian small arms project has suffered too many misfires because the generals in the Army wanted
everything in one rifle. Had the army kept its general star qualitative requirements (GSQRs) at a realistic level, Indian soldiers wouldn’t be saddled with a malfunctioning rifle. As Lt Gen (retired) Syed Ata Hasnain told the media, “The Indian Army's dream personal weapon of twin calibre capability with changeable barrels to cater for different calibers has resulted in the acute delay in the final decision. There appear to be no takers for this
variety which the General Star had desired.”

Military historian Timothy D. Hoyt explains in his book Military Industry and Regional Defence Policy - India, Iraq, and Israel: “In the early 1980s, DRDO made a commitment to develop a new series of 5.56 mm small arms for the Indian armed forces called the INSAS. Both Heckler & Koch of Germany and Steyr of Austria offered to provide for India's immediate needs and transfer technology worth $4.5 million for free. These offers were declined and DRDO spent the next decade, and approximately 2 billion (about $100 million in 1990), reinventing a family of small arms based heavily on Steyr and H&K technology. In the meantime, India imported AK-47 rifles from former Warsaw Pact nations to fill requirements. The INSAS finally entered service in the late 1990s.” The Challenge Of Making Small Arms And Munitions In India

Read this exciting story from Geopolitics August 2019. <p>In Order To Meet The Growing Demands Of The Military And Paramilitary Forces And To Plug Chronic Shortages That Have Impacted War Fighting Capabilities, India Is Now Pushing The Indigenous Manufacture Of Small Arms And Ammunition In A Big...

many defence can be MADE IN INDIA....we spent more US dollar for arms race...we have best DRDO in the

the problem is maintenance and parts....many arms/ammunition fit for other country...may not be same in

india.....just it will increase arms race...

Gold Member
I do not believe that the government should be in manufacturing.
All PSUs are failing in India, they are being propped up by the taxpayers,
Let the private sector manufacturer arms, with strict control of the quality from Armed services, India can be self-sufficient in defense supply.
Share:
Facebook Twitter WhatsApp Email Share Link