National Herald newspaper publishing company The Associated Journal Ltd, established in 1930s, was taken over by a newly-floated company Young Indian in 2010.

The new company was a private firm where Sonia and Rahul had 38 per cent shares each and Congress gave `90 crore to the private company for taking over the public company, which published the National Herald newspaper.

Political parties are forbidden from transferring money to companies. When the controversy erupted, the Congress admitted that the incident claiming the payment was done to revive the party's organ, as it was an "emotionally attached matter'.

Subramanian Swamy tweets on the summons for Sonia, Rahul: "Once they appear they will have to take bail and deposit passport."

A top Rahul aide: “Summons be damned. Now our number one priority is to not have Rahul baba’s passport confiscated. If Rahul baba cannot fly out every week to some undisclosed location and he remains confined to India, it’s going to wreak havoc with his work life balance, man. This is even worse than incarceration in Tihar!!”.

read complete story abt the scam..

Good satire on our judicial system! 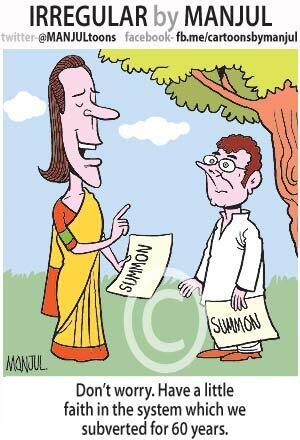 Is there a greater satire than Sonia and Rahul calling themselves indian!!!
V

With both Sonia and Rahul being the majority shareholders of Young Indian, they now join the ranks of hundreds of current and former parliamentarians who have various types of cases being filed against them.

It was funny how certain newspapers buried the news in the inside pages and some TV channels gave a pro-Sonia spin by calling it a mere "summons" or dubbing it a "Swamy versus Gandhis" story.

The truth is that this is probably the biggest negative development against Sonia in her political career. It may spell the end of the road for her. With the court taking the case seriously, we can expect a long-drawn battle with the Congress leaving no stone unturned in defending Sonia.

However the writing is on the wall. No matter what the outcome, the case will be taken first to the High Court and finally to the Supreme Court. The whole process may take 5-10 years. And therein is the point that the aura of invincibility may be shattered when it comes to Sonia.

Imagine for a decade Sonia will be like any other mortal. She will regularly have to make court appearances and will not be able to travel abroad frequently without scrutiny as she has been doing so in the past.

If the court asks Sonia and Rahul to surrender their passports as is being demanded by Swamy, then it will be the final ignominy. It may also be recalled that this is not the first case to go against Sonia.

A Sikh group in the US has filed a case against her related to the 1984 riots. She has been asked to appear in a US court and also to show her passport. With the way things are going, she may never want to visit the US ever again.

How the tables have turned! Before May 16, it was Prime Minister Narendra Modi who couldn't visit the United States. But now Washington DC will roll out a red carpet welcome for Modi while Sonia may find herself with a self-imposed ban.

Sonia was in a position of weakness with a mere 44 MPs in the Lok Sabha even before the National Herald case. Her biggest problem is: Her son Rahul happens to be a co-accused in the case and if Sonia goes down, then Rahul may well go with her.

It is a well-known fact that senior Congress leaders are always uncomfortable with the dynasty but happen to go along with them because they are vote-catchers and somehow manage to be the glue that holds the Congress together.

But every dynast has seen dissent. Jawaharlal Nehru's deputy was Sardar Vallabhai Patel who died in 1950. When it comes to the others, a good six out of ten ministers from the inaugural Cabinet revolted against Nehru and left.

India's only Indian Governor General C Rajagopalachari also quit the Congress and launched his own party.

The list of the tales of the multitude Congress leaders who rebelled against Indira Gandhi would fill a book.

Pranab Mukherjee rebelled against Rajiv Gandhi without much success while VP Singh managed to topple the Congress in 1989.

Sonia took over the Congress in 1998 and escaped such form of dissent so far. But things are rapidly changing. A record low Lok Sabha seats and scandals reduces Sonia to the level of any other politician.

We have been seeing politicians who easily drag court cases for more than a decade, yet shine in politics.

These two can very well learn lessons from them.
OP
OP
V 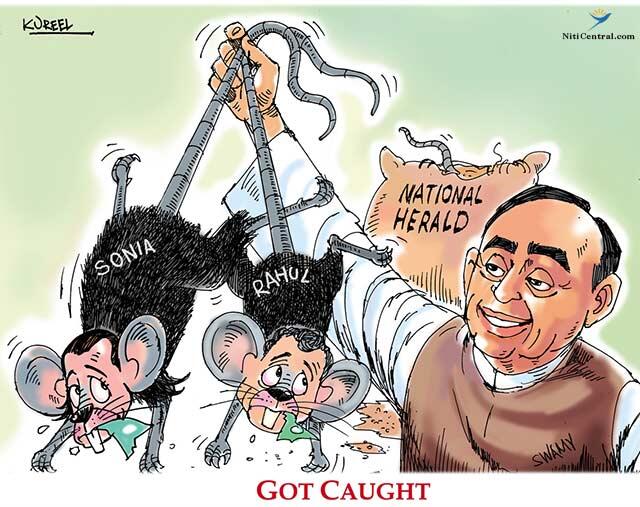 MUMBAI: Even as the Congress is battling charges levelled by BJP's Subramanian Swamy that Congress president Sonia Gandhi and her son Rahul purchased Associated Journals, Swamy is all set to scale up his attack by approaching the Delhi High Court and seeking a Central Bureau of Investigation probe into his allegations.

Swamy has alleged that the Gandhi duo and other senior Congress leaders conspired to pay Rs 50 lakh to help Young Indian acquire the assets worth several hundred crore of rupees of Associated Journals, publisher of the defunct National Herald newspaper.

The BJP leader plans to approach the Delhi High Court after July 7 and ask for a CBI probe, claiming that the "fraud" related to National Herald concerned not just Delhi but other states as well.

NEW DELHI:Congress chief Sonia Gandhi, her son and party vice-president Rahul and some other senior party functionaries, facing court summons in a case related to the takeover of party mouthpiece National Herald, may have to face income tax scrutiny.

Not only the I-T exemption enjoyed by National Herald may be withdrawn if the department is convinced the purpose for which it had been set up is not being fulfilled, but any change of trustees, if intended for indirect transfer of property, could lead to dissolution of the trust and the government may initiate appropriate proceedings, sources said.

Reacting to the speculation of the I-T department considering sending a notice to the Congress chief, party spokesman Abhishek Singhvi said, "We don't react to speculation. If such a notice is sent, it would be another example of vendetta politics. You can rest assured a robust response will be given."

A very detailed write up on the case and the legal reasons for the summons..Well articulated..

NEW DELHI: BJP leader Subramanian Swamy today sought an investigation by Enforcement Directorate in the wake of an order by a Delhi court on a private criminal complaint filed by him against Congress President Sonia Gandhi, Rahul Gandhi and others in the National Herald case.

In a letter to Enforcement Director, he enclosed an order of Chief Judicial Magistrate, Patiala House courts, on his complaint alleging various criminal offences in acquiring the assets of Associated Journals ..

‘How can we stop it?’: Supreme Court on plea to halt migrant workers’ movement on roads