Bride Sends Back Baraat After Her Father-In-Law Kissed Cousin 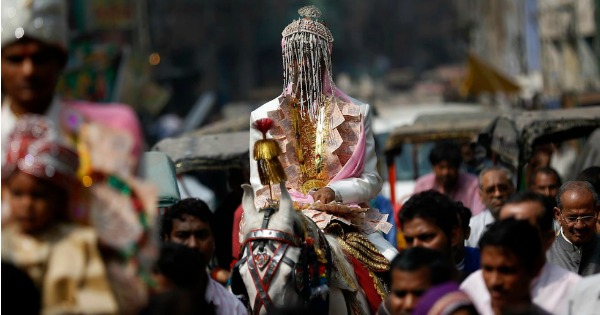 A band, baja and baraat went empty handed after the bride refused to marry the bridegroom on moral grounds when her would be father-in-law kissed her cousin. The incident took place in Farrukhabad district in Kanpur.


The marriage of Ruchi, daughter of Parmeshwari Dayal from Nagla Khairband village in Farrukhabad, was fixed with Rajesh, son of Baburam from Nehru Nagar of Jaithara in Etah.


On the wedding day, the baraat reached Nagla Khairband village. All was well till the time of 'jaimal' ceremony when the bride's cousin Anita (name changed), who had come from Nagla Bhamrasa village of the district, also sharing the stage with her sister, was kissed by the groom's father Baburam even as the bride and her family looked on in deep disapproval.


Piqued at his behaviour, Ruchi refused to marry and ordered the marriage party to return immediately. Sensing seriousness of the situation, Rajesh's father apologised to the girl and her parents publicly. But Ruchi refused to give in. Ruchi's mother, who also rushed from Etah, tried to pacify her but she refused to budge citing moral reasons.


Later, the bridegroom and his father were confined to an enclosure by the girl's side and police were informed. While narrating the incident on phone, bride's cousin Brijesh Kumar said that the wedding party was allowed to return to Etah only after it agreed to return the gifts and reimburse the expenses amounting to Rs 27,900 incurred by the family of the girl on marriage arrangements.


The groom's family returned the gifts and paid the money to the bride's family for the expenses incurred, the police said. "Though police assistance was sought, the matter was resolved mutually by both the sides," said SHO Kotwali RP Yadav.

Bride Sends Back Baraat After Her Father-In-Law Kissed Cousin

It would be interesting to see the pics of the girl who got kissed and the bridegroom's father who kissed her!

Its not as if the groom kissed her cousin!

I feel this girl is over reacting..who cares who a FIL kisses...she is not marrying the FIL.


May be its an arranged marriage..so she did not have feelings for the groom..if it was a love marriage I dont think she would have sent back the Baraat.

R
Do our sasthras,(smartha) permit or approve the marriage where the bride is elder to the groom