Ayodhya ordinance likely to be promulgated in November'18

Awesome! Will perk up Hindus!! Have waited patiently for 500 years for the rebuilding of Lord Rama Temple that was destroyed by Mughals! 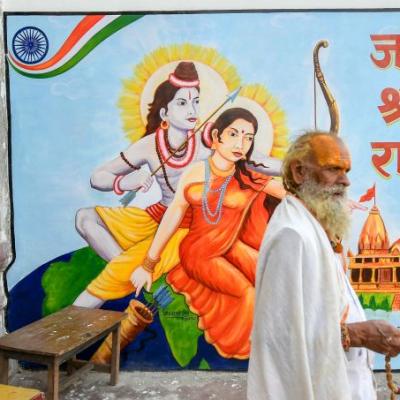 The Prime Minister's Office is armed with a draft ordinance on Ayodhya, according to a highly placed source.

The PMO has obtained a copy of the 1993 Acquisition of Certain Areas at Ayodhya Act, enacted by the PV Narasimha Rao government, and the same is being studied by its officials.


The Modi government is obviously seized of the Ayodhya issue, especially after the RSS and the sadhus meetings have red-flagged the issue.


As per the tentative schedule being looked at by the government, the ordinance is likely to be discussed at the Union Cabinet by the middle of November, after which it will be promulgated.


The government is expected to summon the winter session of Parliament in the second week of December, after elections to the five states are over, and obviously it will discuss the ordinance.


One school of thought is that the government, instead of taking the ordinance route, can straightaway move an Ayodhya Bill in the winter session.


Either way, legal views are being sought on all options before the government.


For the RSS and BJP, this tentative schedule helps them politically, as it will mean the Ayodhya issue will remain in the limelight and the momentum will carry forward till the 2019 Lok Sabha polls.


The Election Commission of India is expected to kickstart preparations for the Lok Sabha polls from January.


Rest assured, Ayodhya will remain in the headlines on almost all Hindi and English TV news channels till the polling is over.

Sorry folks. Hate to be the party pooper !!

in 2018, these issues will only backfire and will alienate people more. In 1992, this worked as india was a closed country and we only had DD. Lol.

In the rural areas today, people are well informed, and they have seen how the poor policy of demo pushed them back into poverty. So this one trick pony will not work !!!
J

The word on the street is that the BJP will resort to fomenting riots to win elections, now that Modi’s grand Achhe Din promises have fizzled out. If the BJP and Modi do what people already expect from them, they would only confirm having run out of Vikas to sell. Saffron is good, but it can’t replace salt on the aam aadmi’s table.
This is why the BJP’s 2019 campaign is likely to have a lot of Hindutva but it won’t overtake Modi’s central narrative, whatever that may be. We are likely to continue seeing provocative Hindutva messaging in political discourse – from Assam’s NRC to triple talaq to renaming cities to Ram Mandir.
Hopefully, it will remain all bark and no bite. If the BJP-RSS are accused of fresh blood on their hands, it will feed into the idea that the BJP is resorting to communal violence since Vikas has failed. A lot of middle-of-the-road centre-right Hindu voters don’t mind Hindutva, have no love lost for secularism, but don’t condone violence either. Saffron is good, but not when it transforms into red chilli powder. This is also why Hindutva forces take to violence mostly when the BJP is not in power.