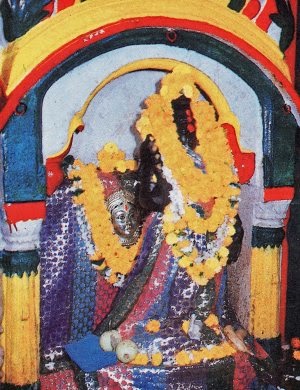 Varanasi is one of the famous pilgrim place in India. In this place you can see Kasi Viswanath Temple. It's one of the Jyothirlingam of Lord Parama Shiva, Annapurna Devi and you can see the goddess Parvathi Sakthi Peeta of Sri Kasi Visalakshi, the goddess sathi devi organ wrist has fell down in this area.

The Puranas say that this city exists even after the Pralaya. The famous place ‘Manikarnika’ is located here and named so because the earring of Goddess Sati was like a pearl (Mani). Goddess worshiped here as Maa Vishalakshi & Lord Shiva as Kala or Kaal Bhairva.

As the divine eye can perceive the entire universe, Mother here is called Vishalakshi, the vast-eyed. Vishalakshi Devi temple is a powerful Shakti Peeth and any pooja, charity, recitation of devi mantras performed in this premises is considered to yield very high results. Unmarried girls worshiping Vishalakshi Devi are sure to get married, childless couple will certainly be blessed with a child, even the most unfortunate ladies will find all fortunes coming their way.

visalakshi devi is present on the bank of the river Ganges.The temple is very small.An idol of Gauri is present in front of Visalakshi.


People believes that Lord Parama Shiva has lived in this Varanasi. There are nearly 300 ghats in this location. Varanasi (Kashi, Banaras) has also been a great center of learning for ages. The city is very famous for Banaras Sarees. Among the mukthi sthal of Kasi, it is considered the holiest place due to the combination of Lord Parama shiva, Goddesses Annapoorna Devi, Kasi Visalkshi and River Ganga. In Hindu tradition, people strongly believes that whoever give up their life in Kasi attains Moksha.

This place is considered very sacred from ancient time and was specified in Puranas like Ramayan, Bhagawatam, Maha Bharatham, Vishnu Puranam, Astadasa Puranam and many more.

Religious Significance of the Vishalakshi Temple


Devotees take bathe in the holy water of the Gange just before offering worship to the Vishalakshi Maa. The devotees believe that offering puja, Jal, chanting songs to the goddess is highly profitable as Goddess provide success and wealth. Unmarried girls worship the Goddess Vishalakshi to find their groom, childless mother for getting a child and unfortunate people for their bright fortune.

Please read from the following links for more information: