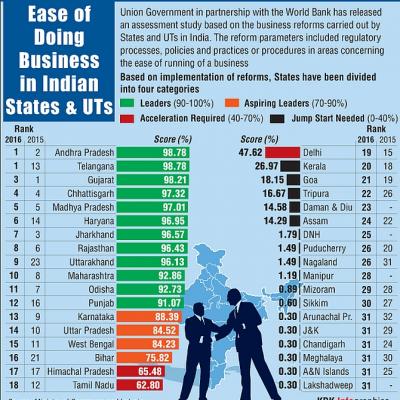 Andhra Pradesh and Telangana have jointly topped the ease of doing business ranking while Gujarat has slipped to the third position in the list prepared by the World Bank and Department of Industrial Policy and Promotion.


Chhattisgarh, Madhya Pradesh and Haryana occupied the fourth, fifth and sixth slots, respectively in the index based on degree of implementation of DIPP's 340-point Business Reform Action Plan.


In 2015 Index, Gujarat featured at the top, with Andhra Pradesh grabbing the second position and Telangana 13th.


As per the latest 2016 Index, those in the list of top 10 states in India providing a better climate for businesses include Jharkhand (7th), Rajasthan (8th), Uttarakhand (9th) and Maharashtra (10th).

really good works of both chief ministers of andhra/telengana....both are in tech savy...
K

The reasons are obvious.

AP and telengana have lot of money to offer after separation and centre pushes investment to states governed by them.

The message is clear.

Even Odissa is non BJP ruled is at No 11 much better! I think it is due to Naveen Patnaik
B

Why is Delhi so far behind? Or are they just chasing govt?
K

Gold Member
In delhi, business does not follow any rules.

It runs in a complex maze of relationships and mutual favours.

Most do not have paper work for any deal and black money is rampant and tax evasion is big.

Someone should be facilitating this.

Who can say there is no ease in doing business in delhi?

There are two rates for everything.

The parallel economy is larger than normal economy.